How to wire a switch to a plug in

I am currently planning out a lighted fountain to give as a gift later this year. It will be a flat back wall with water trickling down the face, side lit with LED strips behind frosted plexiglass.

The water feature will be fed by a low power pump located in the fountain, and the LED lighting has a ballast that goes to a plug. Both of these would require a receptacle, and are limited by the length of the cord.

What I would like to do, is have a double rocker type light switch, with the switches hardwired to control the pump and lights respectively, with a wall plugin feeding the power for the light switch.

How would I go about doing this, or am I really just looking at more work than it is worth?

Let's do the math. You are building an appliance that runs on mains electrical supply. It will be a water feature. And you're giving it to someone else.

Do you own a copy of the UL White Book? Do you know how to do this safely? Will it have a GFCI cord?

Rethink this thing in low-voltage

I can, without worry for your safety, advise you to try it yourself: hold a 9 volt battery with one finger on each terminal; not even a tingle.

Because of the low voltage, it is reasonably safe for you to "hard-wire" this stuff yourself, making your own internal wiring connections to feed the lights and the pump. You can use wire nuts, terminal blocks, solder - whatever seems to fit. Still, insulate the wires - a short causing heat and fire is one of the few ways 12 volts DC can be dangerous.

If you want to "dim" the LED lights, there is inexpensive off-the-shelf tech to do that, called a PWM dimmer. If you want multicolor lights, they make RGB and RGBW lights that are run by a multi-channel dimmer called a controller, where you can dial any color you want. If you want to get into some programming, they even make individually addressible LED lights where you can program a different color and brightness for each LED. All this tech is insanely cheap.

Seriously, while this may be a safety scold, the real reason artists should work in 12 volts DC is the breathtaking options available to you as a designer - all dirt cheap! Anything you see in Las Vegas with lighting, you can do that if you're willing to climb the learning curve. Plain lighting is easy.

The way you safe this is by powering the works from a "wall wart power supply" that is UL-listed. The UL listing is your liability shield. It's vanishingly unlikely to fail-deadly because it's properly designed, under the watchful eye of UL. As such, this is a liability shield for you - you did your part by selecting a certified-safe appliance.

The supply plugs directly into the wall, and everything past it is low voltage. You can use an on-off switch on the low-voltage side if you like. Further, the on/off switch is something you could build right into the water feature.

When (and when not) to use Chinese junk

China makes a lot of really, really cheap junk. It starts on a website called Alibaba where it's sold in bulk for pennies. From there, it's sold on AliExpress (Alibaba, in single quantities), eBay, and the noxious Amazon Marketplace - the vast majority of listings on Amazon.

A "UL Listing" means it went to a third-party testing lab (UL) and was torture tested for safety compliance, and gets a UL stamp and 7-digit file number. This cheap Chinese stuff never has any of that. It has entirely faked marks such as CE, CCC, FCC or RoHS, if it has any marks at all.

Anything sold "at retail" in the US is supposed to be properly UL listed. (note that several labs are legitimate substitutes for UL: CSA or ETL are the most common; again there will be a ~7 digit file number.)

For anything that touches mains voltage, you MUST use listed/approved appliances - either because NEC or the UL White Book requires it, or for your own liability.

However, once you're on the low-voltage DC side, these rules can be flexed a bit. First, I'd use listed wires and switches - for switches you can either use switches intended for mains from Home Depot or Grainger, automotive gear from the auto supply, or electronics-tier switches from Mouser, Digi-Key or McMaster-Carr.

For dimmers, controllers, LED lights, Raspberry Pi's for controlling LED lights, I wouldn't worry too much about UL listing; in fact, since these are components, there wouldn't be one. Though UL has a "component" listing mark called ЯU; that's for people building appliances they want UL-listed. UL won't torture test the components since they're already approved.

As far as your 12 volt "wall-wart" power supply, that touches mains, so it must be UL-listed. These can be had from Mouser, Digi-Key, Galco or Grainger.

Total up all the amps or watts from the pump and various LEDs (no need to count dimmers), and make sure the power supply is bigger than that.

Consider using two separate corded switches. Just attach one to each of the power cords from the light and pump. These are available at most home stores or electrical supply stores. 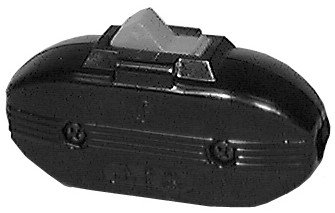 Not the answer you're looking for? Browse other questions tagged electrical wiring cord-and-plug or ask your own question.

0
How do I fix this wiring to properly run LED lights? (More details/products added)
1
Can I Add a Plug to Lights Designed to be Wired In?
2
Can I plug corded light fixtures in outlets in ceiling per code?
0
How to safely add power switch to power strip?
0
Electrical (3way switch and wire but single pole)
1
How to wire two switches to control bathroom fan/light combo (only two 12/2 cables in receptacle)?
1
Can turning power on/off at a mains switch damage LED lights?