I'm working on hanging an Ikea Lisabo shelf. Earlier, I put one on a wall without much trouble using snap toggles, which are great. However, this second shelf, on a different wall, is giving me trouble.

The wall seems to be drywall, or possibly plaster, over plywood, followed by a small air gap, and then brick. The picture below shows a hole I drilled, illuminated by a flashlight. Unfortunately, the air gap between the plywood and then brick is insufficient to snap snap toggles into place; they require 1⅞" inch clearance in which to rotate flat after being inserted into the hole. I bought 3/16" standard spring-loaded toggle bolts, hoping they would require less clearance. I was able to get one of the two required toggles to open in the air gap, but the other won't — it appears that the distance between the plywood and the brick wall isn't uniform, and there's not enough clearance on the left hole.

Now I'm wondering what to do next. Two ideas I've considered:

How should I proceed in mounting the shelves? 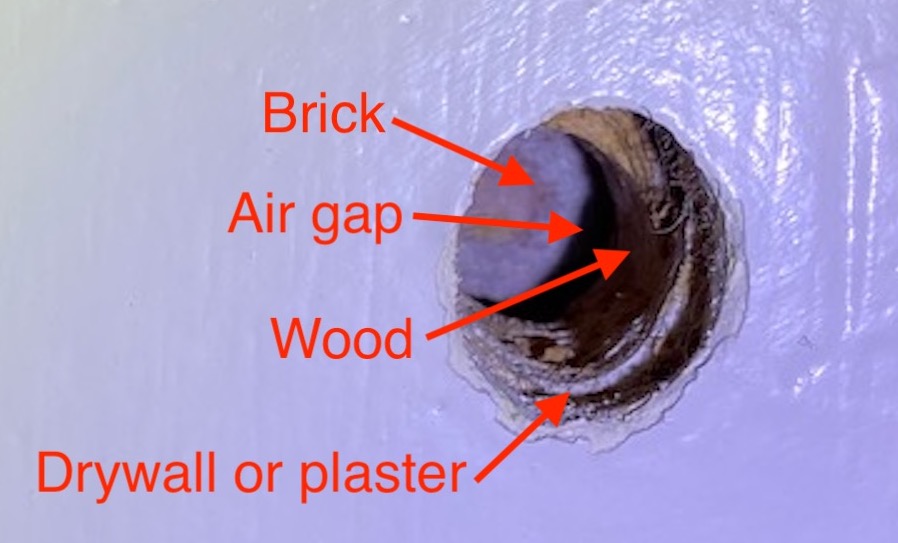 I made an attempt to find duplicate questions before asking this one, but none seem quite to match my situation. Here are a few close ones, though:

I ended up buying a half-inch masonry bit and drilling into the brick behind the holes far enough so that I had sufficient clearance to deploy the snap toggles.

Not the answer you're looking for? Browse other questions tagged mounting brick or ask your own question.

3
Fixing TV on concrete behind drywall
3
What is up with this wall, and what is the right way to hang something on it?
1
How can I fix a cabinet to plasterboard with brick wall behind?

4
What is the sheathing underneath my brick exterior walls?
2
Re-anchoring in existing (failed) anchor holes in brick
1
Is it safe to mount a 40" TV fitted to drywall using one metal stud and snaptoggles?
0
Best way to mount a floating L-shaped desk to a brick wall
1
How feasible is a brick veneer fake wall?
0
Sealing behind brick veneer
1
How can I anchor to a 1" thick hollow wall with a very shallow cavity?
0
Brick wall insulation
0
How to mount TV on brick
1
Wall Mount TV to Drywall with Backing (Without Studs)