Why do LED Lights Flicker on Low Dimmer Setting

I just wired up the following schematic and both sets of LED recessed lights will flicker when dimmed below full power. It doesn't matter what the other dimmer is set to (full power, low power, off). The flicker is very quick, it is sporadic and doesn't follow a pattern. All lights on each line are included in the flicker. When set to full power on the dimmer slider, no flickering occurs. Both of the dimmers are the same and they are listed as compatible on each set of lights. All of the wiring that I ran was 12/2 based on this being on a 20 amp breaker.

All of the LED lights come with junction boxes and screw on pigtails down to the actual light. In the set of 4 LED's on the left of drawing, I have all 4 junction boxes wired up, but only the last light is connected by its pigtail as the wife wants to wait for the countertop to be installed before deciding how many lights she actually wants over it. So I may be removing a 1 or 2 of those lights from the line.

The middle switches in each 3 gang box are simple on/off switches to run either a ceiling fan or an exhaust fan.

I am curious of what steps I should take to try and diagnose the flicker. I just rechecked all wiring connections and nothing is loose.

Is there anything in this schematic that jumps out to someone before I start buying different switches and outlets to troubleshoot with? 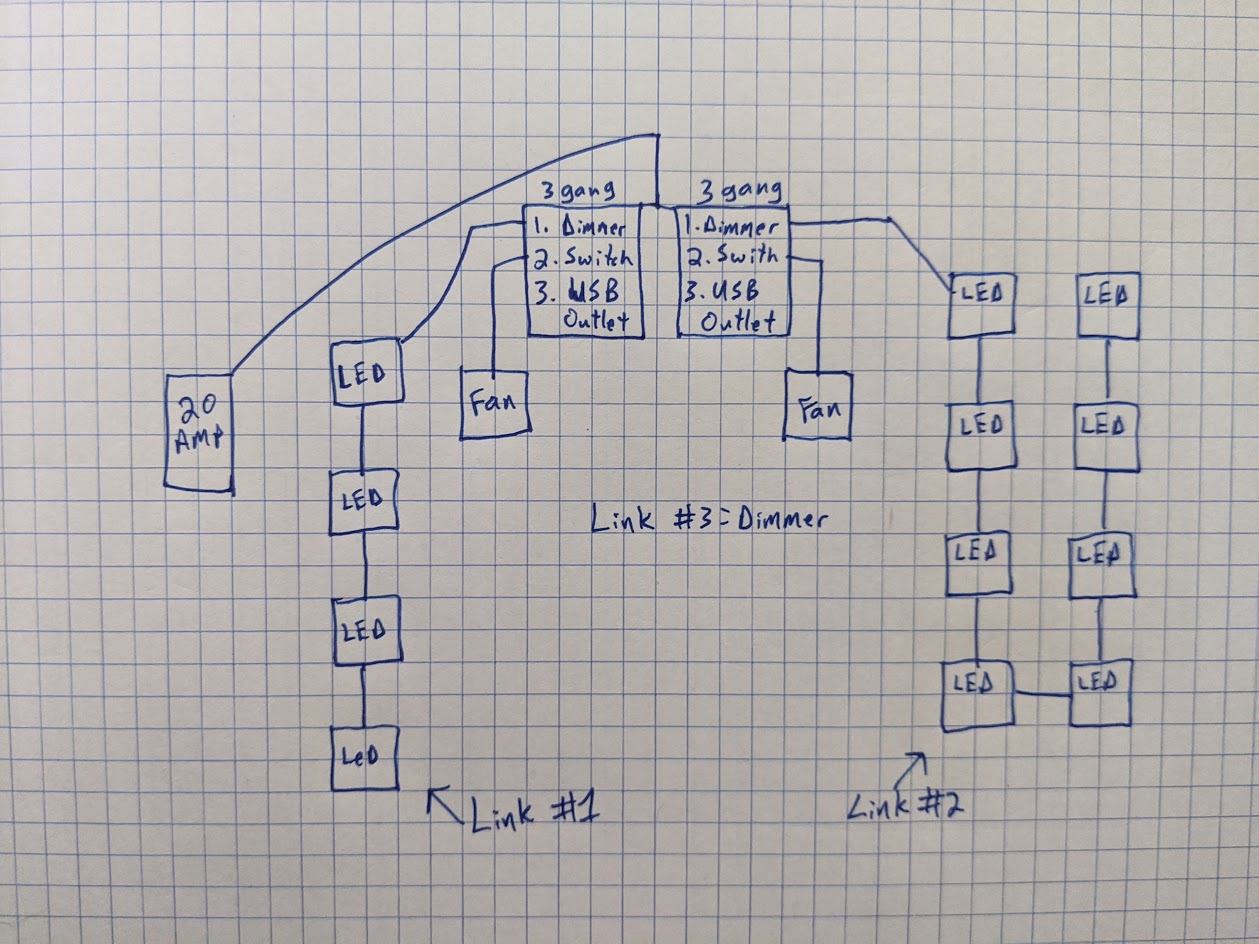 The specifications of the LED lights you have say they will dim down to 10% without any flicker or buzzing. Some lights don't go down that far, and some will go even further.

Based on the manual for your dimmer switch, there is an adjustment to change the low end of the dimming range: 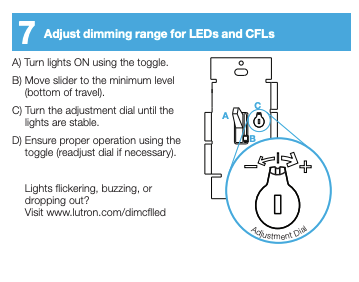 I would assume the switch would be factory set to work with most lights, but maybe the quantity of lights or their exact dimming capability is a little outside the norm. Follow that adjustment procedure and see if it helps. If you feel like you have to adjust the minimum dimming to be quite high, you should also plug in all the lights and make sure that is not making the problem worse.

LEDs on AC Power Don't Like to be Dimmed. Period.

(LEDs on DC can actually be dimmed quite easily - just look at an older battery powered LED device (like handheld computer games from the 1980s) and you can see the LEDs dim when the battery is low.)

But most AC powered LED lights - whether complete fixtures or Edison bulb incandescent replacements - have a driver circuit that takes high voltage AC and turns it into low voltage DC. That process does not lend itself well to dimming.

A modern dimmer is not, contrary to popular belief (including what I thought when I was a kid) simply reducing the constant amount of current or voltage. Rather, it chops up the power into little pieces and only sends some of those pieces to the lights.

However, CFL & LED lights are, essentially "on or off". So dimming becomes a lot more complicated. With LEDs in particular, it takes very little power to produce light, so you often end up in one of two situations:

There are technical solutions, aka "dimmable compatible LEDs" together with "LED compatible dimmers". Essentially, the LED light has to figure out that the chopped up bits of power are not a deliberate attempt at flickering the lights but rather intended to dim the lights. But despite the best efforts, sometimes they just don't work well together. As you have found out the hard way.

If both the LED fixtures and the dimmers claim compatibility, I would start by trying a different brand of dimmer to see if that helps.

I'll tell you a secret: they flicker all the time

You just don't notice it, because the higher the power, the longer they stay ON and quicker switch on/off. As you dim down them, their flickering becomes more even and noticeable.

What about randomness ? Well, it flickers randomly to minimize harmonics disturbance. Wait, what's that ? It's topic for another question on stack exchange...

Even if everything claims to be compatible, you still might have issues. In that case, the best you can do is experiment with different brands and models of each until you get a combination that works.

Both AC dimmers and AC LED bulbs employ some electrical trickery to perform their intended function.

AC dimmers make the light appear dimmer by turning the voltage on and off very quickly. This on-off effect happens at twice the line frequency (e.g. 120 Hz) which is usually too fast to see.

LED bulbs typically need less voltage than is provided by the AC line, as well as constant forward polarity (in contrast to AC's alternating polarity). Packed inside the bulb is a small circuit to make these adjustments.

Electronic devices like LED compatible dimmers that chop up the AC power into tiny chunks tend to generate electronic noise that consists of harmonics of the line frequency but at very high frequencies. These signals will bounce around between other devices nearby through the wiring. This can cause interactions between those devices which would be more likely to be noticed in LEDs operating at low output levels.

If, for example, you insert a "5280" surge protected receptacle between the dimmers and the LED lights you should see a noticeable reduction in the flickering. There are many other devices marked "Surge Protected" that would also work if they fit betteer into your specific application.

LED flickers, because it is a light emitting diode (a solid state lamp). The Lamp will only light when its power cycle is "on". A dimmer in essence, SLOWS DOWN THE CYCLE TIME, therefore slowing down the time frame in which a cycle is repeated. So, the lamp appears to flicker, because it is turning ON and OFF!

2
LED lights with a dim light in open circuit