What could be causing AFCI breaker and GFCI receptacle nuisance tripping?

I have a very unusual set of electrical issues that have proven difficult to troubleshoot.

I live in a newly constructed house. Each bedroom has AFCI breakers.

In the past 3 years living there, the AFCI breaker to my bedroom has tripped about a dozen times. All occur sometime in the middle of the night. Each time, resetting the breaker has resolved the problem. Sometimes the breaker will trip when the 1000W Lutron Dummer is turned on. Sometimes it trips while we are asleep.

I have noticed that when the breaker trips the "Arc" light is not activated which I believe means the AFCI breaker tripped due to a ground fault?

Interestingly, almost every time this has occured, two GFCI outlets, one in our kitchen and one in our garage has also tripped, but with much less frequency. In our case this has happened 4 times in 3 years (1-2 times a year). Each GFCI outlet is on a different circuit in this case. The GFCI outlets do not trip if the AFCI breaker doesn't trip.

Also, one GFCI circuit is in a different panel than the other one.

I could replace the AFCI breaker and the 2 offending outlets. Is there something else I should be looking for?

The only thing that I can think of that would cause this problem is something temperature related or perhaps some kind of surge? is that possible?

Things I have heard that can cause an AFCI breaker to trip:

Could any of this be upstream from me?

Some surge protectors work by "redirecting" surges to the equipment ground, which is pretty much the definition of a ground fault. In this case, it's definitely possible that surge suppressors could be tripping GFCI receptacles/breakers (given a large enough surge).

As for the AFCIs... When electrical contacts separate, they often create an arc between the contacts. This arc spans the gap until the contacts are too far apart, and the arc can no longer be sustained. It's possible (in theory) that the GFCI tripping could create a large enough arc, for long enough to cause the AFCI to trip. It's not likely that a properly functioning GFCI would do this, but if the GFCI was old and worn it could be opening the contacts slow enough that a detectable arc is being produced.

Determining if the GFCI tripping is causing the AFCI to trip, is a simple test. Simply press the test button on the GFCI. If the AFCI trips, you'll have figured out half the problem. If the ACFI does not trip, you could repeat the test using a receptacle tester with a GFCI test function. 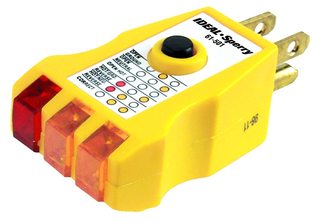 If it's determined that the GFCI is causing the AFCI breaker to trip, replacing the GFCI receptacle may resolve that part of the issue.

Figuring out if the surge suppressor is tripping the GFCI, is a more difficult proposition. It will likely require you to monitor the supply voltage over some time, to identify and document possible surges.

The problem could be "upstream". These breakers can be tripped by noise, such as voltages induced by radio-frequency interference.

Triac-based dimmers abruptly turn power on and off 120 times a second, causing switching noise which has high frequency components.

"Mystery trippings" of GFCI's are not uncommon. To get to the root cause, you would need special equipment, knowledge and time on your hands. For instance a digital oscilloscope to capture a trace of the outlet's line voltage leading up to the event. If a spike, or some strange noise is recorded, then that explains the tripping. But, of course, you still don't know where it came from or what, if anything, can be done about it.

Tighten all the screws that hold wires. A slightly loose connection can cause trouble that happens at different times.

I've heard a vacuum that is full will strain the motor causing a greater arc at the brushes/stator. This will trip an AFCI.

My initial thought was poor a ground somewhere in the circuit causing disparity in the loading and leading to a trip, i.e. a loose ground wire at the panel or receptacle.

See this link for some relevant answers. It will give you a start in the right direction.

Not the answer you're looking for? Browse other questions tagged electrical gfci afci or ask your own question.