How to fix an electrical outlet where the threaded mounting hole is stripped?

The threaded mounting hole in my metal (based on OPs comment) electrical outlet is stripped; please refer to where the top flat-head screw is in the photo. 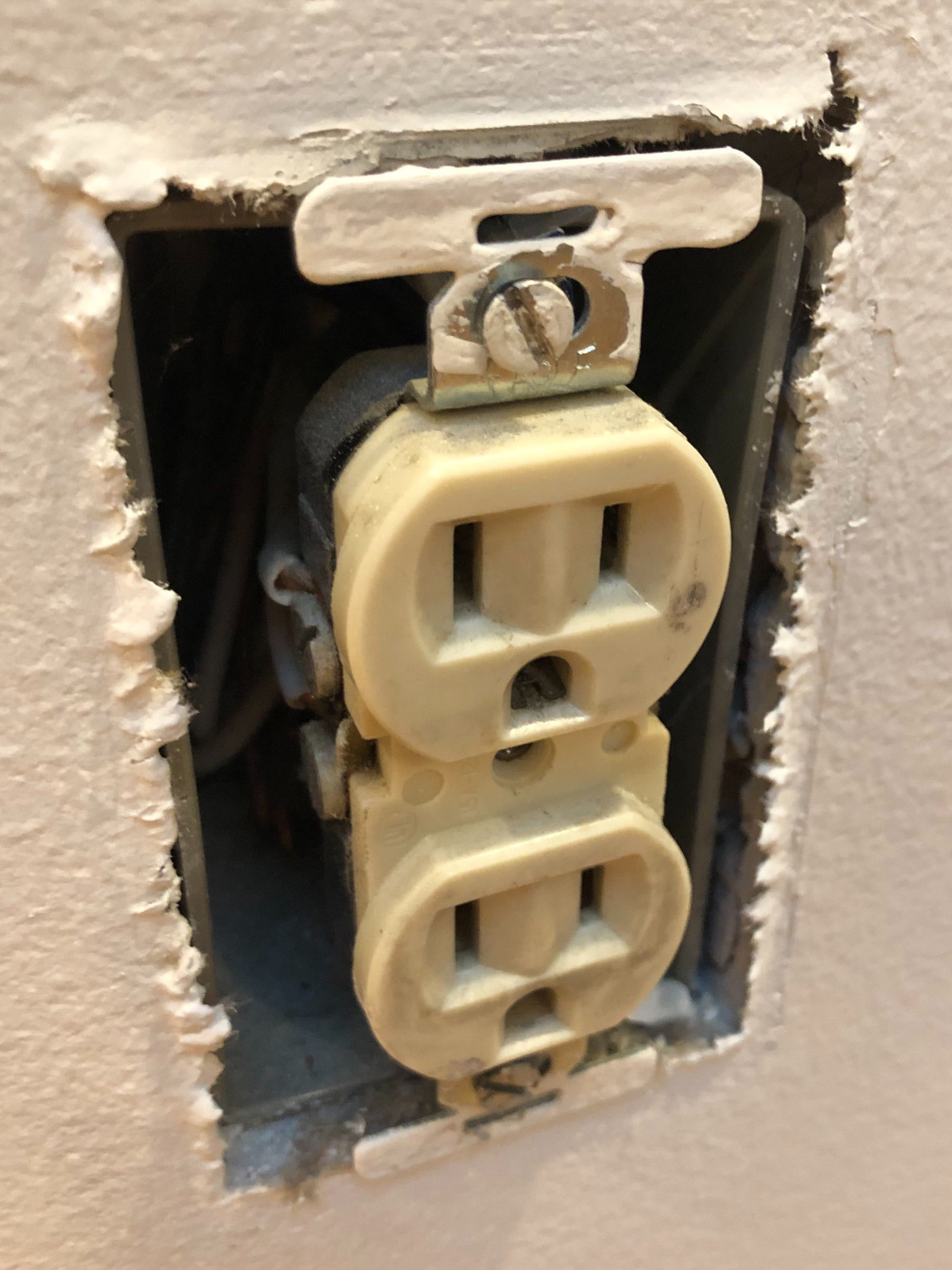 As a result, the electrical outlet is not physically stable. How should I fix the problem without hiring an electrician? Thanks in advance.

electrical receptacle screws
Share
Improve this question
edited May 18 at 12:18

If the hole is slightly stripped, then slipping some type of material in the hole to take up space might do the trick. A small sliver of card stock or paper or a very thin strand of copper wire (thin like a thread, not thick house wiring).

If that doesn't work or if the hole is actually cracked wide open, you could use glue to hold the screw in place. Superglue will probably work well and will set fast. Epoxy is another good choice, but it can be a bit messy. Even something as basic as wood glue would work to some degree, but that takes a while to dry. Epoxy will be the strongest choice here. The other glues would probably fail after a while or if you tried to plug in something with a very stiff cord.

Glue will make it impossible to remove the outlet, but since the box is broken already, anyone that would replace the outlet would just replace the box as well. They are usually very easy to replace once you've done it a few times.

Retap to 8-32. This is commonly done by electricians and many of them carry a Klein 6-in1 tapping tool just for that reason. The #8 Flat Head fits just fine under the cover.

This is one virtue of plastic boxes. Instead of being a 1/16" thick tab, the screw actually goes into a fairly deep mounting hole.

Now, mind you, this advice is against Code since you're not supposed to modify UL-listed equipment. But I really doubt an AHJ will have a problem with it.

Power off!!! I would mix a quarter-size blob of epoxy, and fold in "fairing filler" (fine sawdust will do) until it barely flows. Sort of like DIY bondo, but a bit thinner - actual bondo is too chalky.

Use a screwdriver blade to trowel it in the hole, and an un-bent paper clip to ram it down. Really pack it in. It's OK to leave a slight hole in the middle; that'll actually help later.

After it dries, pre-drill a hole in it. Make sure it's 6-32 thread (a bolt shear on a multi-strip tool can be used to measure threads). Then google the correct drill size for tapping a hole that size; (#36 for a 6-32 thread) which you won't have, so round down (to 3/32"). That machine screw is self-tapping, so it can deal with a slightly undersized hole.

Given that the box is plastic, you have at least 3 options:

Obviously, make sure the electricity to the outlet is turned off before doing any work.

OP says the box is metal. That kind of rules out option 2.

To replace the box, you have to:

1) Remove enough of the wall around the box so you can work. Bigger is better than smaller 'cause you're going to have patch the wall anyway when your done.

2) Disconnect and remove the outlet.

3) Loosen/remove any nuts that hold the wire clamps in place.

4) Remove the box, pulling the existing cables out as you do so.

5) Decide on the style box you want to use. Probably want a new work type and just nail it to the existing stud, assuming you're removed enough sheetrock to do that.

6) May want to pull the cable into the box before nailing the box, if you can do that.

7) Wire up the new output and mount into the new box.

8) Oh yeah, last but not least - patch and repaint the wall!

Wrap Teflon tape around the screw a couple times.

I just had this and used a small plastic stucco anchor pressed into the box mounting hole and it held the receptacle tight.

Given that the box is metal:

2
DIY machinist drilling problem
1
What is the optimal screw drive hole shape to get the maximum torque for a steel screw?
2
Should I install GFCI outlets or run new grounded cabling in my older home?
1
Electrical Codes Pertaining to Electrical Near/Under Gas Cooktops
6
remove sheared screw from electrical outlet box?
2
Repairing a broken screw hole on a plastic junction ceiling box?
3
Moving electrical outlet 3 feet to the left
2
Can I use rivets to attach electrical boxes to Purlins?
0
Updated How to secure electric mast to wooden siding