I am planning to finish my garage and currently planning the rough-in. I wanted to add a way for the lights to come on automatically if the garage door is being opened at night, or if I go out to bring out the trash and it's dark, then for the lights to go off automatically. I am thinking I need a ceiling-mounted occupancy sensor like the Leviton ODC0S-I1W with controls set to activate with darkness. I would also want these lights on a switch or two, so if I am working in the garage, I can flip either wall and keep the lights on without needing to walk past the ceiling sensor.

Is this configuration possible? If so, what would a compatible wall switch be and how should this be wired? Thank you.

What usually throws people in this situation is conflicting control schemes. People think "If the motion sensor throws the light on, and I throw the light switch off, it should go off". But if you can live with the "either/or" arrangement, turn the switch off and the light stays on because the motion sensor wants it, then this is easy.

Start by re-marking wires; this will make life much easier.

You'll need black and red electrical tape. Get a 5-pack of colored tape for $4-5.

The black wire on the lamp itself should be re-marked red. If the lamp is a spur line (i.e. it's not a switch loop), then /2 cable will suffice, but re-mark the black wire red on both ends, since it will be switched-hot.

Cable sizes must match what is already in the garage, and 12 AWG=20A breaker, and 14 AWG=15A breaker.

Also note that since 2011, plain switches need always-hot, switched-hot and neutral, so black, red and white needed there. The motion sensor will need the same.

At this point, you cable it up in whatever way the wire routing best lends itself. You need to connect the wall switch, the motion sensor, and the lamp, any way which proves most practicable/economical. Think of that as a triangle, with power coming in any one corner. You are only allowed to cable 2 sides of that triangle.

So "connect the dots" as it were. Some places will need all 3 colors, perhaps some only two. If you have a segment that only needs red and white, you can use /2 cable and recolor the black as a red. You shouldn't have a segment that needs only red and black.

Now, if you're in an old-style (2-wire) switch loop, first, you must replace that cable with a /3 cable if that is possible. If unable to replace, then tag the black wire red, and the white wire black, due to an NEC requirement.

The motion sensor is an interesting one. They have 2 blue wires, which go to the relay... that makes sense. Remark one of the blues black, and the other red.

Wow, that was easy. This is why we did all that remarking before. I love my colored tape!

As to how specifically to wire it, I can't tell you how, because I don't know which cable routes are easier than others, and I don't know where the power is coming into the system. However, you can draw it yourself. Here. 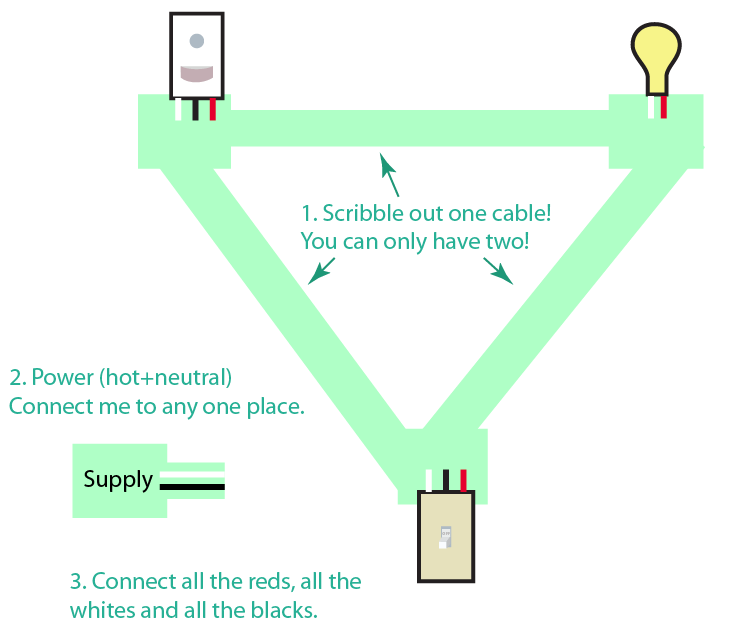 2
How can I get my fluorescent light fixtures to work with an occupancy sensor?
1
Replacing Single Switch with Dual Single
0
Can a occupancy sensor switch and a timer switch be installed in the same three way circuit?
1
How to install 3-speed switch for ceiling fan
0
Rewire wall switch to an on/off switch, for a ceiling fan that has nightlight, fan & lights?
1
Can you use a motion sensor switch to control an outlet
0
Garage has switched outlets only, cannot operate new garage doors. What are my options?
1
Motion sensor with bypass switch?
1
Ceiling Fan w/remote, capped off red - but now dawn to dusk sensor on porch only stays on
1
How can I make a switch activate two circuits, when both are normally switched independently?