240V wiring and a thermostat

Newbie here. I do a bit of home electrical work at the most basic level. (Replacing outlets and switches. Running a new line off an existing outlet. Nothing that would even elevate me to an amateur status.) I am smart enough to know to always turn off the breaker and to always double-check to make sure it is off. The rest, I know, is enough to make me dangerous.

So, I'm trying to figure out what is going on here. I am in US. I have a 240V 30A breaker that powers two 240V heaters in two different rooms. Both heaters draw less than 8A and both have their own dedicated thermostat. The heaters do not have built-in thermostats. I am replacing the thermostats with 'smart' thermostats. (The Mysa thermostat.) Picture of the existing thermostats below. 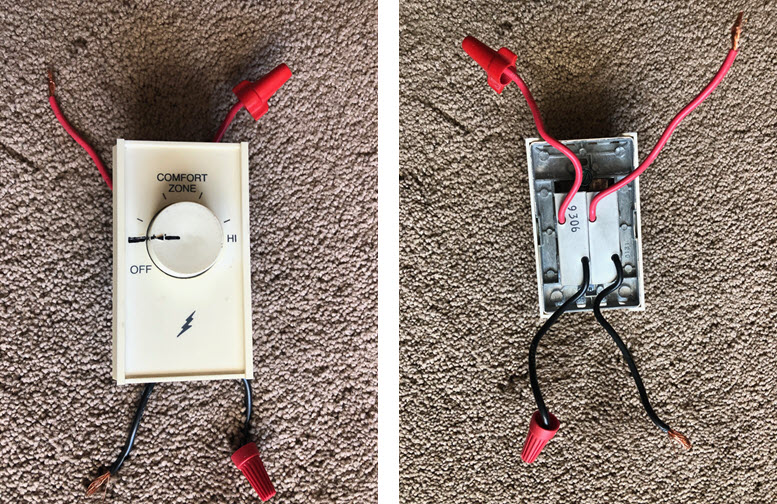 I did some research. I watched YouTube videos on 240V. I read the heater wiring diagrams. I read (twice) the Mysa install documentation. I pulled off the first thermostat on that circuit and it was exactly what I expected. 2 wires coming in from the breaker (red and black) and 2 wires going to the heater. I followed the instructions, triple-checked my work, put the new thermostat on the wall, and threw the breaker back on. Ta da! Smart thermostat bliss!

The heater works, but based on my (VERY LIMITED) understanding of 240V, I have no clue what is going on here. Or even how this is supposed to be working. The heater is definitely a 240V heater. Is there something sneaky / sketchy going on inside the wall that I can't see?

I'd appreciate it if anyone has suggestions.

With the limited info provided I will guess that it is a 240v heater as the other one was but this time they only used a single pole thermostat to control the power, it works the negative here is that there will always be a hot conductor in the baseboard unless the breaker is turned off, this used to be quite common, or was used with multiple heaters in 1 room. Each of the switches in the thermostat can control a 240v load, but by not breaking both hot conductors there is always power to the heater but no current flow until the switch closes providing a path for current flow.

Not the answer you're looking for? Browse other questions tagged electrical thermostat heater 240v or ask your own question.