Ground fault interruption in a dryer with ground bonded to neutral?

I've posted this issue elsewhere and maybe because it's so boring nobody wants to expend the energy on it (which is fine!) but for me the motivation is 50/50 safety and learning more about electronics and circuits.

So here's the background: I was recently asked to replace a dryer at one of the properties I do maintenance work at, and the owner had bought a used dryer for cheap that we understood to be in working order. Upon putting it in, it became apparent the heating element was bad. Since it was important to get it fixed ASAP I made the decision to salvage the element from the old dryer (both Whirlpools and nearly identical in construction). I found out the hard way why this is a bad idea with a 3-wire setup, as neutral is bonded to the chassis of the dryer.

After an hour of use, the property called me to report that now the drum wasn't working, but the element was staying on and the dryer was hot. I asked them to immediately unplug it, something I discovered was also potentially hazardous because they had to come in to contact with the dryer. I have since labeled the circuit breaker the dryer runs on, a split phase 120/240 30 amp breaker, and instructed all staff to instead open the breaker instead of getting near any appliances that are not operating normally.

I immediately suspected the old element I had taken out had deformed inside the housing it was in, creating a short to ground (which again, ties to neutral), as it would stay on only when the timer and temp circuit contacts closed. This caused the case to overheat to the point of opening the thermal fuse on the blower housing which also allows the drive motor to run. A continuity check from the element terminals to the housing confirmed the issue, and I disconnected it (how the thermal cutoff didn't open is beyond me, as it appears to have been undamaged and still passes continuity check, though I know that doesn't mean it might not be bad still). Ordered new parts, fuse etc. Works perfectly since having replaced them.

What bothers me, is that this ground fault did not at any point open the breaker. After testing the resistance of the new heater as well as its operating voltage, I got about 10.9 Ohms across the element running at 244 volts. The derived amperage here is in-like with the specification of 23 amps. However, the element at the time of the ground fault (it similarly measured 10.3 Ohms when I continuity checked it) was getting supplied through the 120 volt leg, which would give me roughly 12 amps passing through it. I am guessing as this outlet had no ground, the breaker treated it as though it were normal circuit operation, which means the case was in turn energized as well.

In the dryer, I have identified three separate ground to neutral bonding straps, each drilled to different parts of the chassis which feed through the wiring harness and show continuity to the neutral terminal.

If I unlinked them from the harness and instead added a single ground circuit connecting the different compartments of the chassis in series, behind a diode, and latching relays, which then went to the neutral and one phase, would this work to effectively interrupt the circuit in the event of another ground fault condition? I know there are much simpler ways to address the issue, but installing new outlets and running a ground wire is not an option, unless it were to be one hanging outside of the breaker box (which would be a big no-no, especially with annual inspections happening within the next week).

I've also heard some electricians suggest simply unbonding the ground, but this seems like a bad idea since in the event of another short, the current might find a separate path to ground in the environment (or short to another component, causing further havoc).

For reference, I have a picture of the wiring diagram here 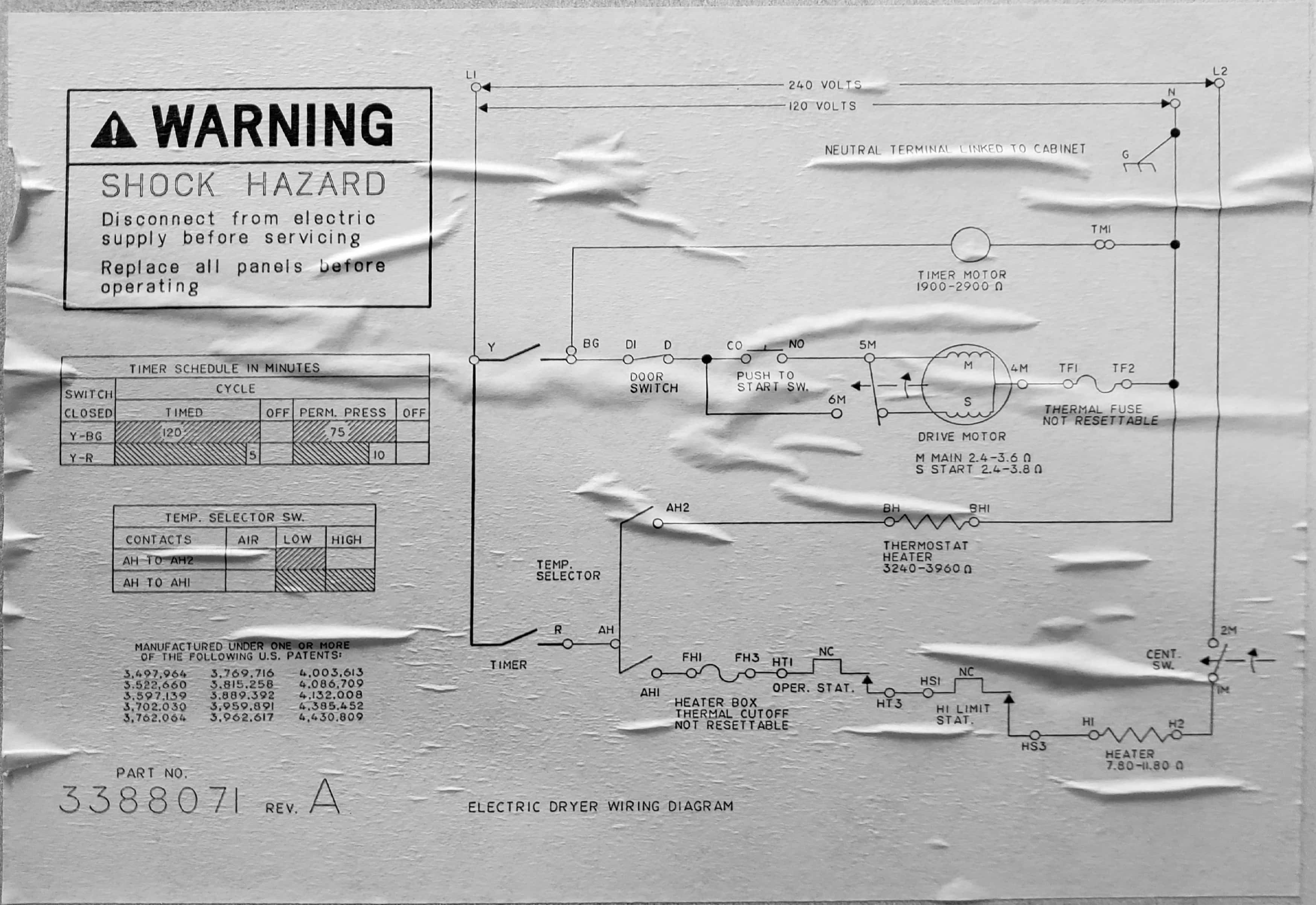 Update: http://imgur.com/gallery/Kb544Mb here are additional images of the breaker panel (lower left breaker services the dryer), had to upload to my Imgur separately. In the picture with the open dryer top panel, the three red circles are the case to neutral bonding points I found. The image of the outlet is a bit concerning, as that bare lead poking out is not a ground, but appears to be a neutral conductor (upon closer inspection, I could see the white insulation). The image of the heating element housing has a red circle showing approximately where the old element shorted relative to the inside of the element housing.

These are just my thoughts and don't believe anything I say without someone else confirming it.

I thought the neutral was not supposed to bonded to ground inside the machine? To prevent the ground from carrying normal operating currents while causing it so that if a live wire got loose and touched the equipment case, the live wire would be shorted to ground. Because a neutral does not necessarily have to be at ground voltage when operating; It may be at voltages other than GND due to voltage drops caused by carrying current.

I am guessing as this outlet had no ground, the breaker treated it as though it were normal circuit operation, which means the case was in turn energized as well.

I don't think your typical housebreaker monitors Ground either, or even the neutral. I think it just monitors the hot wire. What I'm trying to say is, I don't think the breaker would behave very differently if the outlet did or did not have a ground.

3-wire dryers were connected hot-hot-neutral in the age before grounds. are still allowed to continue in service if they were wired that way prior to 1989(?)

They are supposed to have their chassis bonded to neutral, because the prevailing thought was that this is an expeditious way to ground, and THAT THING is unlikely to happen since these appliances are rarely moved or plugged in. "THAT THING" is a lost neutral, where the 2 hots are connected but not the neutral.

You see where this is going. If neutral is lost, the entire chassis lights up at 120V.

Also, the timer and motor will lose power, which will make the dryer seem broken.

How to detect it

What you want to build already exists as a commercial product. It is called a GFCI Breaker, 2-pole in this case. They price about $80.

If you have an FPE, Zinsco, Pushmatic, Crouse Hinds or other obsolete panel, or if you just want to save a couple of bucks, you can use a "hot tub subpanel" instead; it may have a 50A or 60A GFCI breaker, but we don't care about the current trip value.

Then, forward feed through it to a 4-wire socket with ground intentionally not wired. Convert the dryer to 4-wire connection, which means removing the ground strap according to the dryer instruction book.

Done and dusted. You are safe and Code legal.

The other way to cure the safety problem

Retrofit a ground wire for real. Change the socket, plug and jumper to 4-wire, as above. But do not apply the labels obviously!

NEC 2014 gives you a free hand to retrofit grounds to almost any circuit, following some simple rules.

Your neutral is still broken, though

The above will only make the dryer safe. It will do nothing to make the dryer work. The neutral wire is broken, 98% chance at the breaker panel or socket.

Though, gosh, it would be a terrible shame if the cable were broken enroute. Then you'd have to replace the entire cable with a 4-wire cable (10/3), and Code would require a 4-pin socket, plug and rejumpering.

What bothers me, is that this ground fault did not at any point open the breaker.

... unless you pay $70 extra for a breaker that does, in fact, detect ground faults. That one works as you expect.

For an additional $10 you can get a breaker+GFCI+AFCI, which also detects arcing.

I have identified three separate ground to neutral bonding straps.

Very unusual. There should be only one neutral-ground strap. The others may be ground-ground straps. Follow the published instructions for removing the ground strap.

I know there are much simpler ways to address the issue, but installing new outlets and running a ground wire is not an option

Whisper to the tenant to report the dryer shock incidents to the AHJ. The AHJ will then explain to the landlord in no uncertain terms, exactly what is, and is not, an option.

unless it were to be one hanging outside of the breaker box (which would be a big no-no, especially with annual inspections happening within the next week).

Surely you don't mean Code legal repairs are a big no-no with inspections coming? Everything I propose above is Code legal (though I can't vouch for whether the AHJ would insist on a permit being pulled... generally for a safety fix, I would think not).

Everything is good now, barring some serious electrical f-up back at the breaker box's neutral bar. The bare lead was indeed a ground, which I couldn't discern without removing the old outlet. Continuity from neutral to the bare copper checked out, I wired a 240 volt grounded outlet (an NEMA 14-30R type) in its place, replaced the cord on the dryer with a matching 30 amp 4-wire cord and most importantly attached the ground from the cord, clipped off and capped the old neutral bonding link, and checked all ground connections inside the dryer to make sure none were by any chance connected to the neutral terminal, and that all were connected to the cable's ground. For extra safety, I also checked for shorts inside the socket, and checked to make sure there was no current on the case.

No need for any kind of wacky DIY circuit interrupter after all.

Double edit: I forgot my manners, thank you all for your help! :)

Not the answer you're looking for? Browse other questions tagged electrical safety dryer or ask your own question.

1
Where in the breaker box should I terminate the neutral wire from my dryer circuit?
0
Frigidaire Dryer with error E64
1
How can I test a three prong dryer receptacle for open neutral/ground?
2
Short circuit in dryer?
5
Should my dryer cord's neutral and ground be connected to the same terminal?
1
Continuity on hot/neutral at dead outlet
1
Dryer Thermal Fuse Keeps Blowing
1
New Electric range trips GFCI when plugged in - 4 wire, bonding strap removed
2
Why did the dryer stop working shortly after moving and changing cord to four prong?
0
Faulty Ground Fault Interrupt