I had an electrician install a dedicated 20 amp GFCI duplex outlet and 20 amp circuit breaker (both customer supplied) two years ago. The outlet is directly below the panel box. Just this month, I mistakenly operated a 12 amp vacuum cleaner, a 12.5 amp space heater (on max heat), a 1/2 amp fan (on max speed, an air purifier, and three LED lamps, at the same time, out of that outlet for a few minutes. That’s 26 amps, or 130% of the rated current.

According to Waytek’s Table of “trip time versus percentage of rated current”, it should’ve tripped somewhere between 100 seconds (one min 40 secs) and 1000 seconds (16 mins 40 secs). That’s too big a range for me. And the chart was too hard to interpret for me. In any case, it did not trip. How long should it have taken before tripping?

Your 12 amp vacuum cleaner is probably labeled according to the maximum current it can draw (to be sure, look at its electrical specifications rather than the big marketing label some manufacturers put on the front to make the vacuum sound powerful). It is unlikely that it was actually drawing 12 amps at that particular time. If it was drawing say 8 amps, maybe the total load was closer to 22-23 amps.

If the total load was about 10-15% over the circuit breaker rating, it is expected that it would not trip. Circuit breakers are rated for the current they will definitely allow for an unlimited period, and there is some tolerance on top of that depending on the ambient temperature (the hotter the breaker is, the lower the tolerance above labeled current will be). We can assume the ambient temperature was less than 20C since you were using the space heater, and this gives roughly a 5% "bonus" to the current before the breaker trips.

If for some reason you want to make sure 22 amps cannot be drawn on that circuit, you should probably install a 15 amp circuit breaker instead. But since this is recent work done by an electrician and the outlet is near the breaker, it's unlikely a cause for concern. But do make sure the power strip plugged into the outlet is rated for 20 amps as well (or that you are using two separate strips with their own 15 amp breakers).

I find it interesting that you looked up the breaker rating on Waytek’s Table but did not use an amp meter to verify your true amperage usage on the circuit.

Many appliance makers advertise the amperage or horsepower of a device because they believe it attracts buyers. Yet we have constantly found that their advertising doesn't hold up.

Try to simulate the same conditions on that circuit with an amprobe (amp meter) attached. It would be better if it is the type that records minimums, maximums, and average. Then we have an accurate measurement of what is truly happening on the circuit and we can then compare it to the trip charts.

15 amperes or 20 amperes on a typical circuit is not a magic critical number. The wires (14 AWG or 12 AWG) can actually carry far more current. The concern is heat. The electrical code is based on an understanding of how much heat, for how long, actually poses a problem. While you should not push the limits, an occasional overage is built in which is why the breakers are designed with these trip curves. A short circuit is dangerous and results in an immediate trip. And a ground fault can be extremely dangerous, so GFCIs are designed to trip super fast.

All that being said, there have been some poorly designed /fraudulently approved circuit breakers that don't trip when they should. If you have Federal Pacific or Zinsco, google for more details.

But significant numbers of breakers in recent production are failing to meet the standard trip on 130% of rated current. The Federal stablok and their chinese knockoffs are the worst. 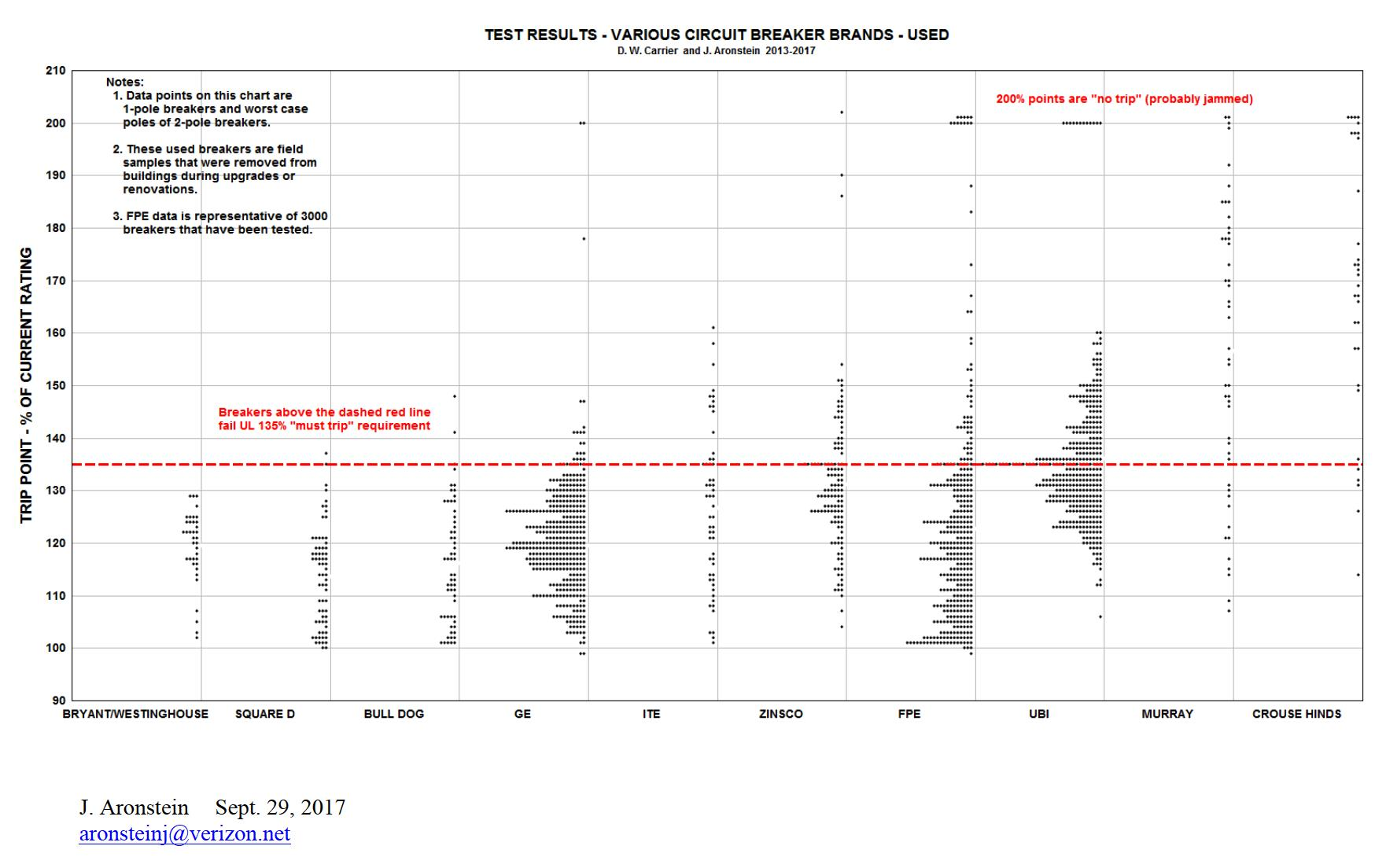 If I am correct, Waytek supplies automotive breakers.

Mains breakers are quite different. They have a magnetic (instant) trip for extreme overloads. And a thermal trip for lesser overloads. The thermal trip mode is to protect the wires from melting.

The thermal trip must trip (eventually) at 135% of rating, in order to get a UL listing.

However I suspect your actual load was somewhat shy of 26A. You are stating nameplate ratings, actual performance may be less.

Not the answer you're looking for? Browse other questions tagged electrical wiring lighting electrical-panel or ask your own question.