What is this radiator vent used for and how is it used?

My place has a steam heater. On its right side, there is something similar to radiator vent 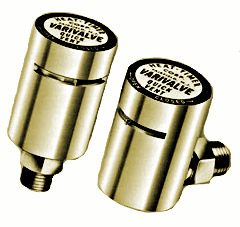 It has a pin movable anywhere in the middle slot which is about a half circle. I was wondering what it is used for, and how it is used? When the pin is on either of the two ends, what does it do?

According to the manufacturer, Heat-Timer Corp. The item pictured is a "Varivalve" air vent.

The pin is an adjusting lever that controls how fast the air is released from the radiator which, in turn, affects how fast the radiator fills with steam. By setting the pins correctly you can prevent all the steam (heat) from running to one end of a room or building.

I don't have any first-hand experience with these specific devices, but here's a link to the manufacturer's instructions for the product.

That's a thermostatic valve, a mechanical device which closes when exposed to heat and opens when cool. As the hot steam enters the radiator the air inside escapes through the valve. Once the hot steam reaches the valve it shuts, trapping the steam inside. As the steam cools it condenses and the resulting water returns through the pipe, while the now open (because it's cool again) valve allows air back into the radiator.

The trick to that particular valve is that you can adjust how large the vent opening is. Typically you have multiple radiators in sequence, which means the one closest to the boiler fills and shuts off first. Increasing venting on the end of the line (and/or restricting it at the start) allows the radiators to fill at the same rate, hopefully balancing out the heat. (Or unbalancing it, if you want a particular room cooler.)

It's not dangerous because steam radiators use only thermal rise and gravity to move the steam around. Somewhere in the instructions it will state that it's for use only in low pressure applications.

Not the answer you're looking for? Browse other questions tagged heating radiator or ask your own question.

9
What type of space heater is best for an uninsulated garage?
9
Why is my radiator hissing?
5
Are there fans for radiators to improve performance?
3
Why does my radiator leak if it's not fully opened or closed?
1
Is this radiator too small?
3
Banging pipes/radiator
2
Water radiator system has single loop instead of flow & return pipes — does this make sense?
0
What kind of radiator is this and can it take TRV
0
Convert gas wall heater to inset fireplace
0
Trouble understanding my heating system