Is there a simple way to make these rough sawn, exposed joists level and flat?

I am renovating the kitchen in my 100+ year old American Four Square home. I was unfortunately not able to salvage the original longleaf pine flooring, so it has all been pulled up. I'm left with original rough sawn 2x8 joists (spanning about 13'). The problem I am facing is that none of the joists are in the same plane, even at the ends where they are sitting on the foundation (one end) and a support wall (other end).

Luckily, there is a cinder block wall near the middle of the span running perpendicular to the joists. The most obvious thing to do is shim under that to get the middle sag out of each joist. But since none of the joists are in the same plane at the ends, this job isn't as simple as that. I'm not quite sure how to tackle this problem. Can anyone point me in the right direction?

Here are some pics of the room. Notice that there is one point in the foundation wall where the joists are resting on a wood header and they notched the end of a few joists halfway up. If you have any idea how to address that, that would be great, too. 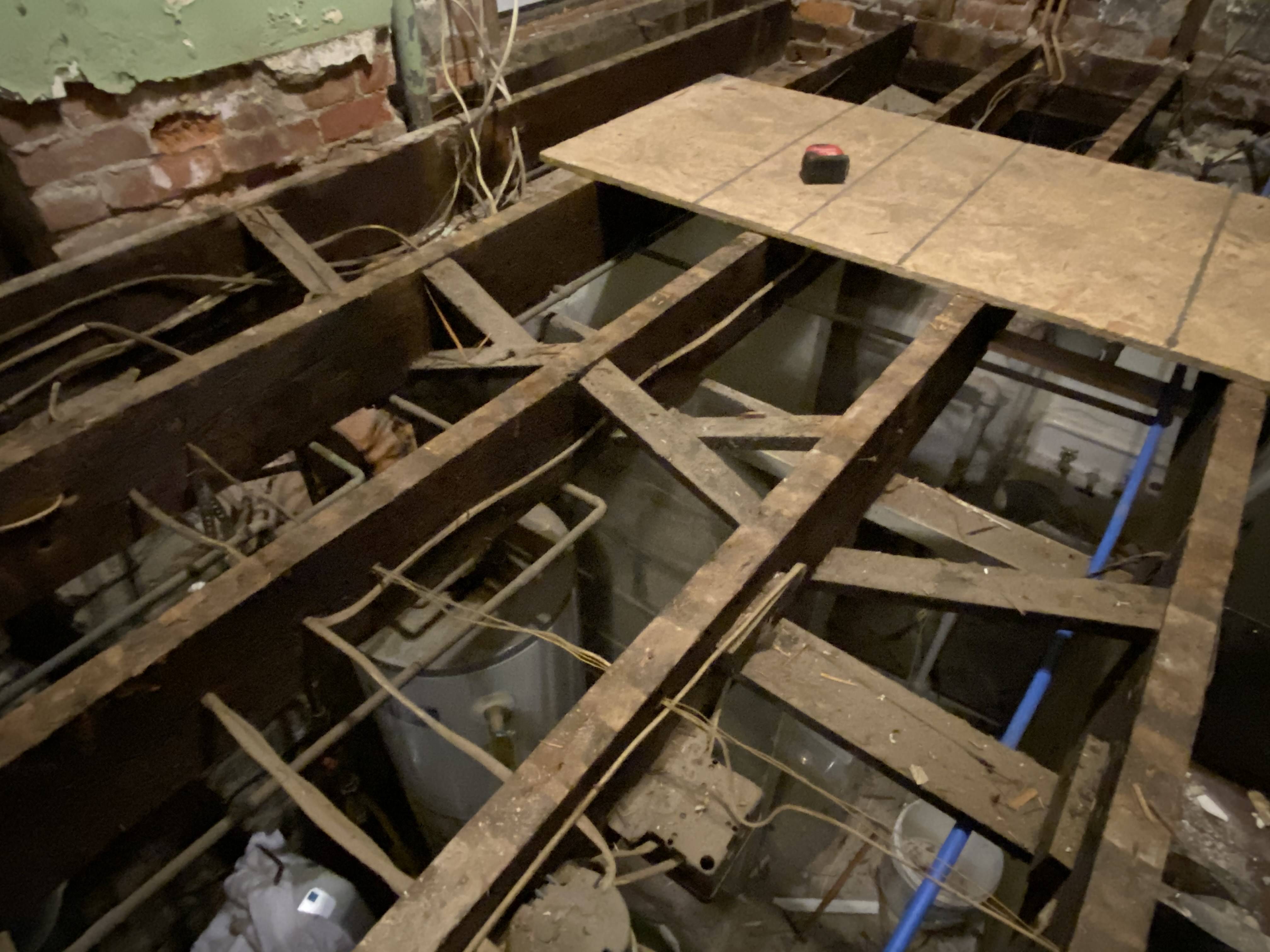 Thanks for all the advise. I decided to go with the shimming approach, which was a bit tricky because the joist are quite wavy (up and down). I created custom shims by scribing a pattern on to a level 2x4 and cutting on the scribe line with a jig saw.

If I would have had fewer mechanicals in the joist bay, sistering would have probably been faster and easier. Ripping 14' with a jig saw is time consuming and I still had to use additional shims when my scribe wasn't accurate enough. I used Advantech subfloor adhesive to set the shims in place, then used a variety of screws to secure each shim. In some places I needed to use 3" screws because my shim was about 1.5" tall!

If you haven't used Advantech subfloor or adhesive before, I highly recommend it.

Sistering probably would have been necessary if I wasn't lucky enough to have a block wall mid way under the joists to act as a girder. The original joists would have needed the extra strength from a glued and screwed sister without the block wall.

Here is what it looks like with the shims installed: 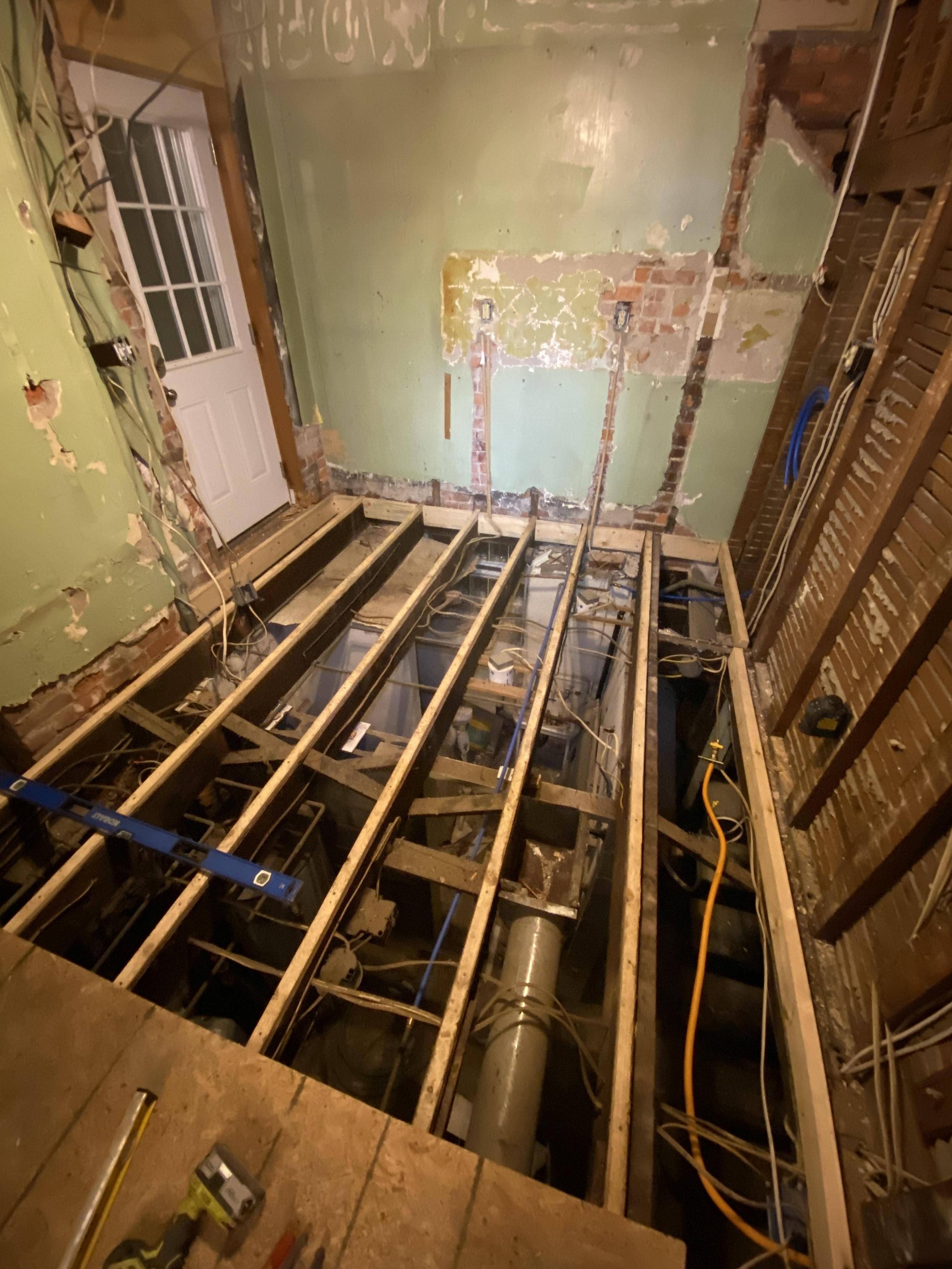 It appears your joists are about 24” on center (based on the size of the bricks). Therefore, your joists (rough sized) will support about 120 plf at 13’ span depending on the species and grade.

If the joists are at 24” on center, then your floor will support about 60 psf (Live Load and Dead Load). Your dead load should be between 10 psf and 15 psf. So, your joists are adequate.

However, in kitchens we always add a joist (or 2) under the refrigerator.

Notching the bearing end “about half way up” is serious. This limits the support strength in “shear” but not “bending”. (Notches in the middle third of the span affects bending more than shear.)

With that big of notches, I’d guess (without actually doing the calculations) you’ll loose about 20% of the total strength of the beam.

Therefore, you can shim each joist to get the joists level, but I’d keep the added weight (shims) to a minimum and I would not add a ceiling finish under the joists. I’ve seen leveling done with a transit and level, but it’s time consuming. Start at the highest point in the room and work out in all directions.

In such situation the highest point of the existing joints is set even with the sistered member that is attached at this high point.

Installing these additional members does impact the existing diagonal blocking that would have to be removed and re-done.

I think your on the right track to start by shimming under the joists along the top of the cinder-block wall. The target height for the middle of the joists is the most common high-level of the joist-ends. Then lay shims on top of the low joist-ends to bring them up to the target height. I've ripped unusable (warped) 2x4s and thin sheet materials into long strips for the shims. I like to have a selection of 1/16 and 1/8 inch shims. The shim strips can just be scored and snapped off at the needed lengths. If the shims on top of the joists-ends are laid down with adhesive, they won't move around on you when you lay the sub-floor.

Shim up to, but not over, the target height. The sub-floor can span some un-shimmed distance (say 16 inches), so the shims don't have to be continuous. But there should be shimming under all the sub-floor joints. A stiffer sub-loor (7/8" or better) is more forgiving about the spanning. I borrow a rotating laser-level for similar work, it saves a lot of string or hand level work. I'd need another picture of the notched joist-ends to comment on that issue.

Not the answer you're looking for? Browse other questions tagged framing joists leveling or ask your own question.

1
How can I level the joists and ceiling?
1
floor joists splitting at non-beam end
2
Should I reinforce joist connection at the beam where no hangers were used?
10
Do I need a nailing edge around the perimeter of my room for my new AdvanTech subfloor?
1
How to treat joist that has wet rot before sistering a new joist to it
1
I-joists on an old dimensional lumber floor
1
Do I need to improve structure above basement window?
1
LVL install with old notched ceiling joists