Is this outside security camera wiring correct or lazy?

We are replacing a defunct security camera system with a new one. I was quoted new wiring for the whole deal, the installers are now trying to not re-wire the whole setup. I now have a second hole into the side of my house.

The house is 14' off the ground in a hurricane prone area. I get that there isn't a way to hide the wire. The new wire has been zip tied every 8" to the old secured wire that was snipped off the old cameras.

This doesn't seem correct to me. See pic. Black wire is old wire that doesn't have enough power for cameras and is actually stapled properly to house. White wire is new. I was planning on removing the black cable when the cameras came down as I didn't think anyone would secure things to it. Given that we're hurricane prone, I do not want anything 'extra' permanently mounted on the sides of the house. Am I nuts or is what they've done normal practice? 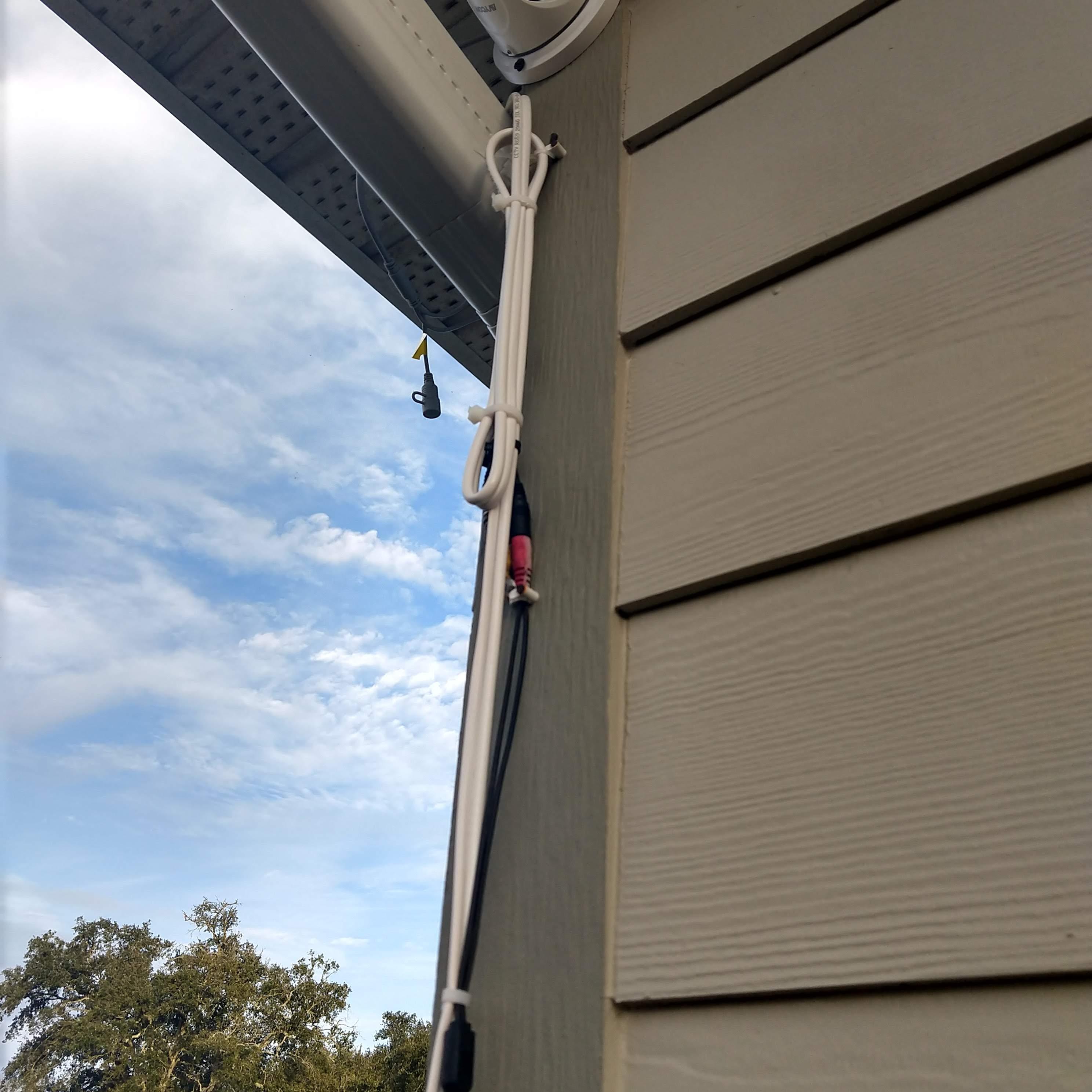 It sounds like you are near salt water, probably get a lot of sun. This is a bad place to cut corners on outdoor rated, corrosion resistant materials. I doubt that those white wires are rated for outdoors / UV resistant. I am sure that those natural colored (not black) cable ties are not UV resistant. I couldn't rule out they just forgot or just didn't care, but using those outside is usually a sign someone is very inexperienced, that's like first day on the job stuff.

The nail and plastic saddle type staples that were used to mount the black cables do not appear to be outdoor rated, the nails are rusty and may eventually corrode to the point they pop off. They also probably don't clamp the cable snug enough to hold the cable straight for a nice neat appearance.

It's very lazy to use old unused cable as a means of support. There is a code requiring the removal of abandoned cables, but it wouldn't really apply here. Still, it's sloppy.

Ideally you would do something to hide the cables - run them in the walls, or install them in conduit - but that can get expensive. But at the very least don't build up a bundle - remove the old cable and reattach the new cable to the building surface with a suitable fastener.

Not the answer you're looking for? Browse other questions tagged electrical wiring security or ask your own question.

4
Can I use the wiring from a disabled home security system to power wireless cameras?
0
Is the Thermostat Wiring Correct
2
Need help with correct wiring when replacing a hardwired smoke detector
1
How to attach a security camera to an existing box?
2
Should I use round or rectangular electrical boxes for stubbing exterior security cameras?
11
Do powerline adaptors need to be plugged into outlets that are on the same leg
0
Wire identification for a camera system install
2
How should I run this conduit for security cameras across a flat roof?
0
Electrical wiring issue with Ring Camera