I was thinking I would replace one of our dumb switches with an Eve smart switch. I opened it up to make sure it had a neutral wire, but it was wired so poorly that as I pulled on the old switch, most of the connections came undone. In the process, though I discovered that it was a 3-way switch, and so I can't use an Eve smart switch.

So I decided to just replace the old dumb switch. But the wiring of the box is more complicated than I'd ever seen. So I'm not quite sure how to rewire it. It has three cable coming in to the box. The top-right cable has a ground, black, white and red wire. The bottom-right cable just has a ground, black and white wire, as does the bottom-left cable.

The ground wires are all connected.

The two bottom white wires are connected to each other still, though it's possible the top white wire was connected but I'm not sure - it could have been connected to the switch instead.

The top-right red wire is free (and so I think was connected to the switch).

The bottom-right black wire is free (and so I think it was connected to the switch).

I'm trying to re-attach a Lutron DV-603P 3-way dimmer switch. It has a ground, a black wire and two red wires. I've seen some wiring diagrams for it when used as both a two-way switch and a 3-way switch, but none of the diagrams use a 3-cable box - just a simple 2-cable one.

So does anyone know how I should re-wire it as a 3-way switch in to a 3-cable box?

Here's a diagram of the wires as they exist, though as I said, some of the free wires might have been attached to some of the other wires and come loose when I removed the old switch. 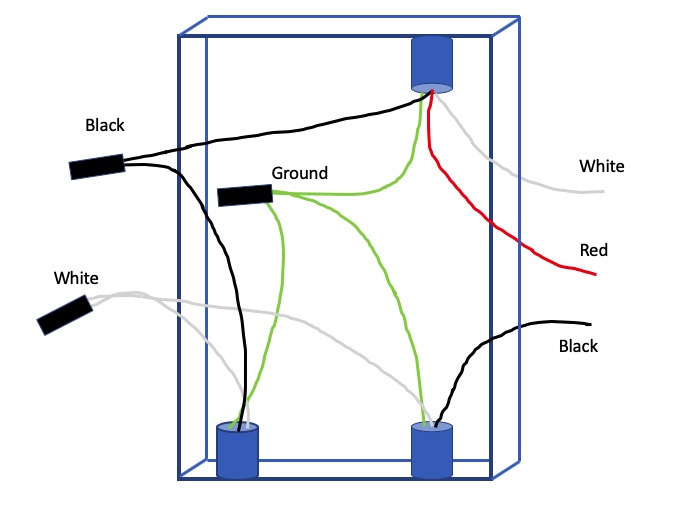 And here is the back of the switch itself. 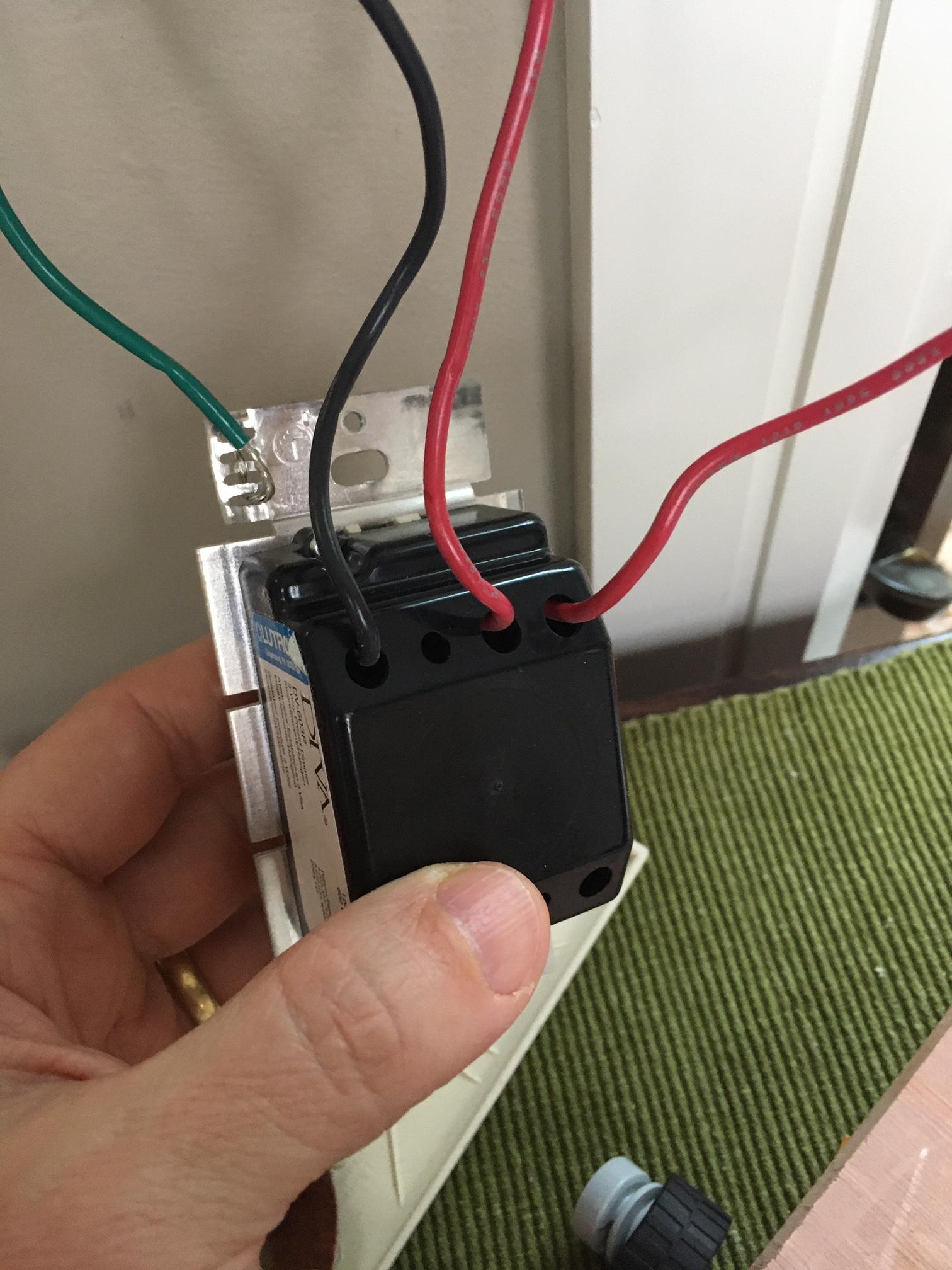 Here's a photo of the box, and then a close up of the upper part and the bottom parts. 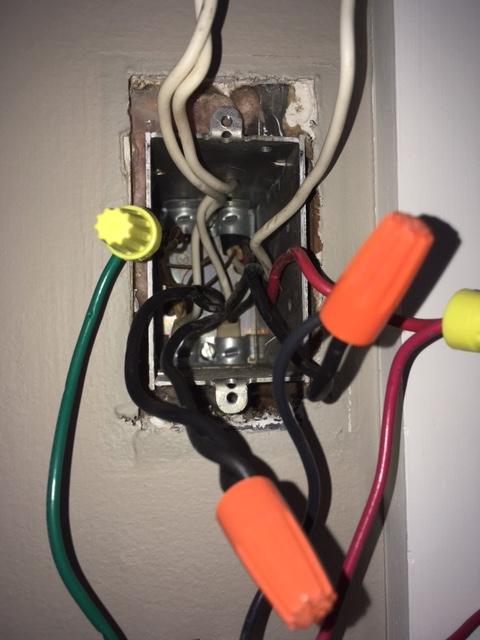 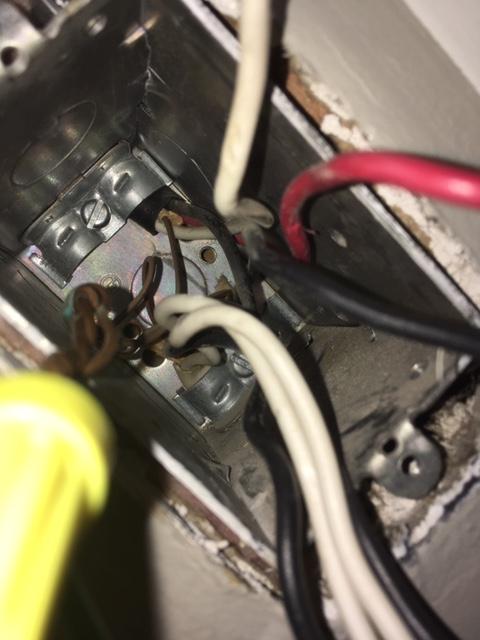 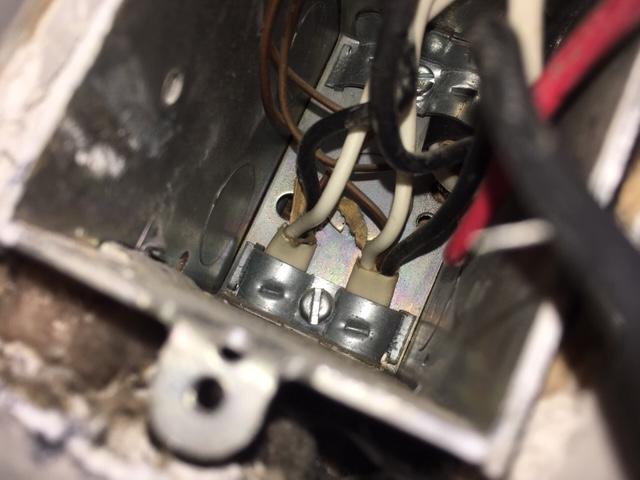 What you have there are cables, not conduits.

A 3-way switch has 2 travelers that must necessaily be in the same conduit or cable. On your setup, that can only describe the white and red from the upper cable/conduit.

3-way switches have 1 more terminal (other than ground), which is called common. Lo and behold, there is one loose wire left in your panel.

Make sure you are using the right size of wire nut. The right one for these connections is orange or yellow. Red is too big.

Travelers are very confusing. Maddening, in fact, because they are typically wired using common cables, and those come in stock colors (black white and red). As such, in standard cables, color does not correspond to purpose. This means you have (for instance) white wires in the box that are neutral, and other white wires in the box which are travelers. In a comment, you ask a very simple question, expecting a simple answer and there isn't one. So we're gonna make it simple.

Those two wires in the same conduit/cable are both travelers. We are going to get yellow tape and re-mark them with yellow tape. This is my standard color for travelers, since it matches the brass screw on common 3-way switches.

Since the two red wires on the switch also are travelers, we remark them also with yellow tape.

When I run traveler wires in actual conduit, where I get choice of wire color, I use 2 yellows for travelers. There is no need to distinguish them from each other.

Not the answer you're looking for? Browse other questions tagged electrical dimmer-switch multiway-switch smart-switch or ask your own question.

3
What is the correct way to wire a 3 way switch where power comes into the middle switch?
3
Light Fixture Stopped Working After Replacing Its Three-Way Switch
1
Extra Wire in Light Switch Box?
3
Wiring a switch and a dimmer
1
Convert Three-Way to Single Switch and Add Smart Switch
2
How to install a Wemo Three-way light switch in this configuration?
1
Connect Single 3-way Light in 3-gang Box (Lutron Caseta)
1
3-Way Wifi Switch Installation Question