What kind of electrical connector is this and how do I remove it?

I am replacing a bathroom ceiling light fixture. The house is pretty old and has cloth covered wire. The fixture I'm replacing is relatively updated but when I went to remove it, I noticed it was connected to the wires out of the ceiling using some kind of wire joining implement that I've never seen before. I lightly tugged on one the old black fixture wire and it came right out of this connecting device. The white wire won't budge. Since it was for the old fixture I'm replacing, I cut it.

What is this connector and is there some kind of release button/switch on it that I need to press to disengage the wires? 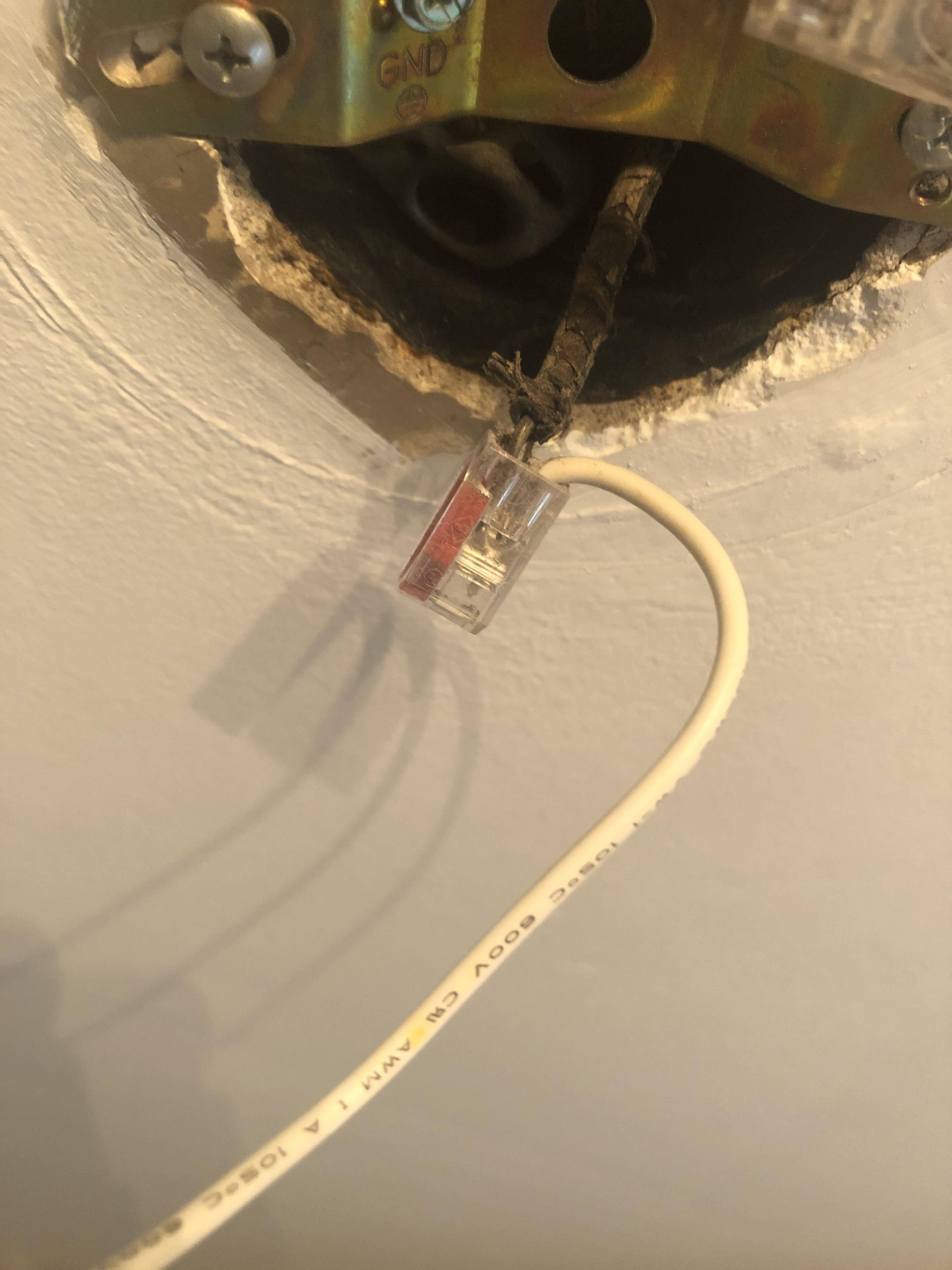 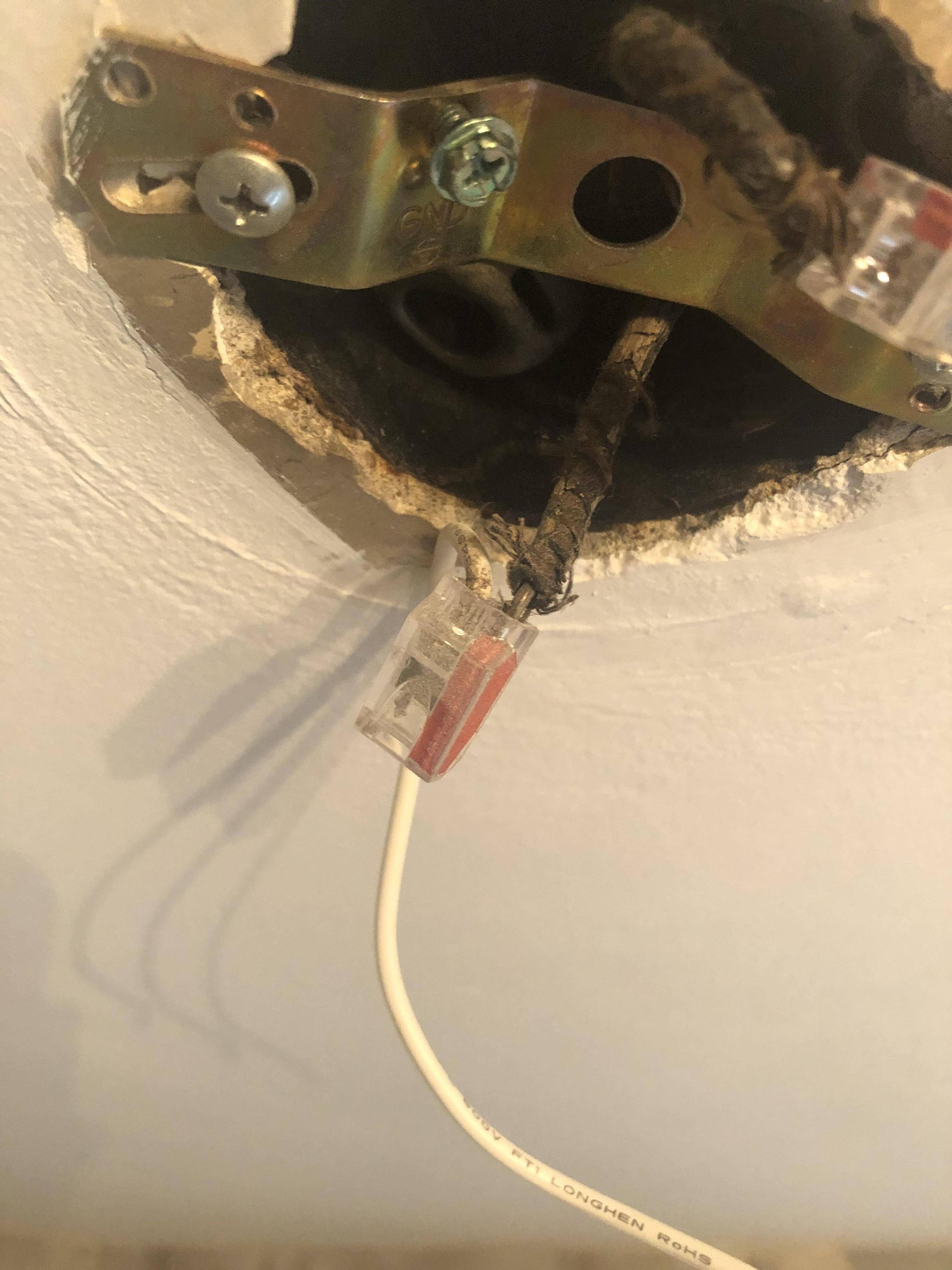 It's a push-in connector. Basically the splice version of a "backstab". Not the best connector, to be sure.

Do not cut. Firmly grasp the splice connector, then steadily tug and twist the --

-- Actually, forget that. The wires in the ceiling are already too old, short and fragile. Leave the connector alone and cut the modern, plastic black and white wires about 6" from the connector. If you dislike this plan because you plan to reuse the old lamp, then cut it at the halfway point.

Strip the ends of those wires you just cut, and wire-nut your new fixture to that.

Also these types of connector are single-use, so once you drag a wire out of a void, you have damaged the spring and can't use it again. This is also true even if you use a proper release mechanism. I would say "just cut" because it leaves the wire stub in the hole, preventing reuse; but wire length is precious and not to be squandered, that's why you have a short-wire problem today.

Fortunately the housing is clear so you can see the workings inside. It contains a springy "tooth" that grabs any wire pushed alongside it. There should be a small slot or round hole nearby for a small pointed tool to release the tooth while you tug on the wire. It works much like the quick-connects on the back of receptacles and switches. Normally they are designed for a certain range of wire gauge. I guess I should type my answer more quickly, to not attract copy-cats.

That is a push-in connector, it has a one-way spring inside that holds the wire. I think it's a Gardner Bender Pushguard. Ideal makes In-Sure connectors that are similar, Wago makes similar connectors, and I am sure there are other brands.

To get the wires out one at a time, hold the wire in place, steady light pull on the connector, and twist the connector back and forth. This will work it out in a few seconds, the wire kind of "unscrews" from the connector.

Caution: Be very gentle with that old wire, that insulation may be prone to crumble. If it falls apart, you'll have a much bigger problem to deal with.

(can't comment and this falls out of the scope for edits to, in this case, @Harper - Reinstate Monica's answer, thus ...)

So the general statement

Also these types of connector are single-use

This is stated more clearly on a German Wago page: "Tip: Reuse WAGO box terminals" (and a picture shows how to remove wires)

Disclaimer: I haven no connection to Wago except for being an occasional customer (and fan).

1
How do I wire a new ceiling light with power to the ceiling and 3-way switches?
3
How do I rewire an old light fixture?
13
What do I do if there are only two wires coming from my ceiling electrical box?
1
Did I wire my light fixture correctly?
1
New fixture won't turn on
2
Confusing ceiling light fixture wiring
0
How can I extend an electric wire without a large cross-section connector?
6
garage light with two hots and one neutral
0
Stranded wire gauge too small for push-in connector(USA)
2
What is this brown material in my 1950s-era ceiling light's electrical box?