Initially, Nest showed that I was incompatible due to the "V" wiring but learned that it was because they thought it was "milivolt" designation. However, after talking with them and researching, I learned that this was not the case and should be able to connect the V/W2 into the Nest "W2".

Will this accomplish the same thing? I learned that W2 is for 2nd stage heating which doesn't seem to be exactly the same thing as Pulsed Width Modulating heating. 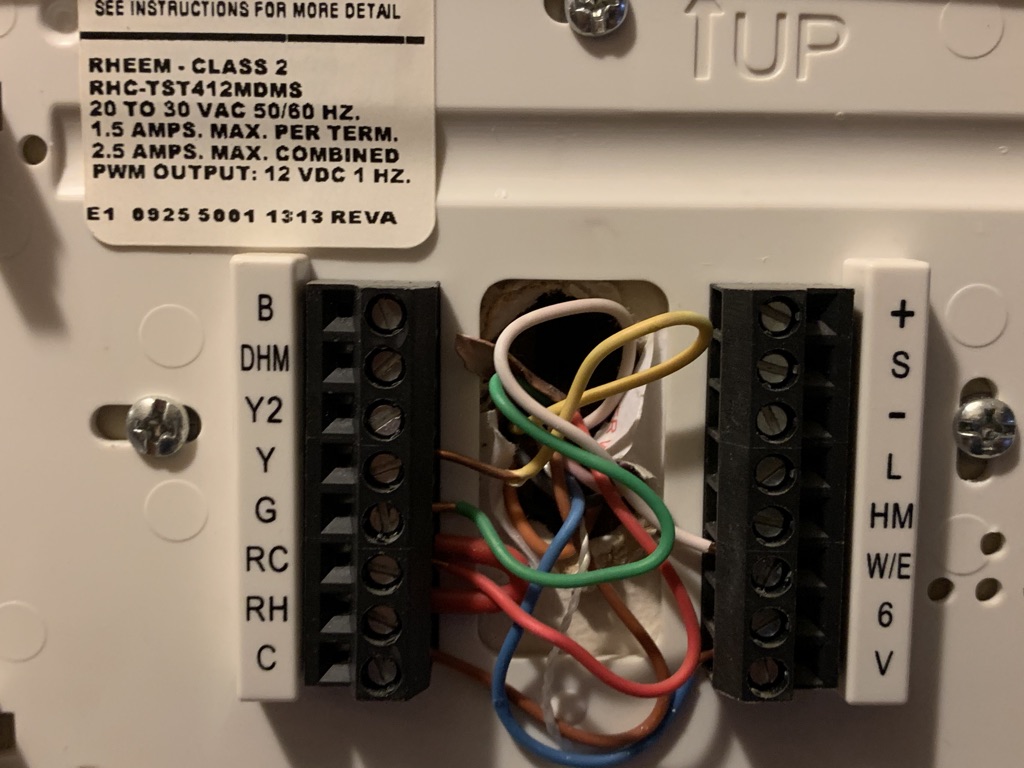 Edit - Found in manual: From Manual

So it is currently operating in "modulating" thermostat mode but is able to operate with Nest in a "2-stage" mode by simply flipping a dip switch. Then the "V" wire will act as "W2" wire.

It looks like this type of heat is called "modulating heat" or a "modulating furnace". I can't find any information saying that Nest supports that.

The labels on the thermostat and furnace are meant to be a convenience for the installer, and you really have to refer to the equipment documentation to see what it does. The common labels of R, G, Y, W, C are fairly standard, but once you go beyond that, there are conventions, but you have to research to know the exact use of R, W2, B, etc.

That's a long way of saying that just because the furnace happens to have a W2 label and the Nest also has a W2 label doesn't mean very much. You have to dig into the documentation (as you have done).

Not the answer you're looking for? Browse other questions tagged hvac thermostat or ask your own question.

2
Will I see any performance gains if I reconfigure my thermostat to control the second stage of my 2 stage furnace?
4
Does Nest utilize all the benefits of a communicating furnace
3
Why won't my Central Heating Boiler turn off with Nest thermostat installed?
1
Circuit to make Nest thermostat think there are separate heating and cooling systems
0
How should I set my furnace's DIP switches to allow thermostatic control of the fan's stages?
2
Thermostat White-Rodgers 1F82-261 switches to stage 2 heat for no apparent reason
0
Can I use a nest thermostat for two heating sources (Furnace and electric floor heating)
1
Wiring for 2-stage thermostat and 2-stage furnace with single stage cooling
1
Nest thermostat heating way beyond set temperature