Is my pergola post a shearing and stability concern?

So ever since my wife pushed me to move the post off square I've been searching online (periodically for about a month and I've never found someone dumb enough to have done this and had a tutorial or solution to the issue posted). I'm pretty sure it doesn't exist... 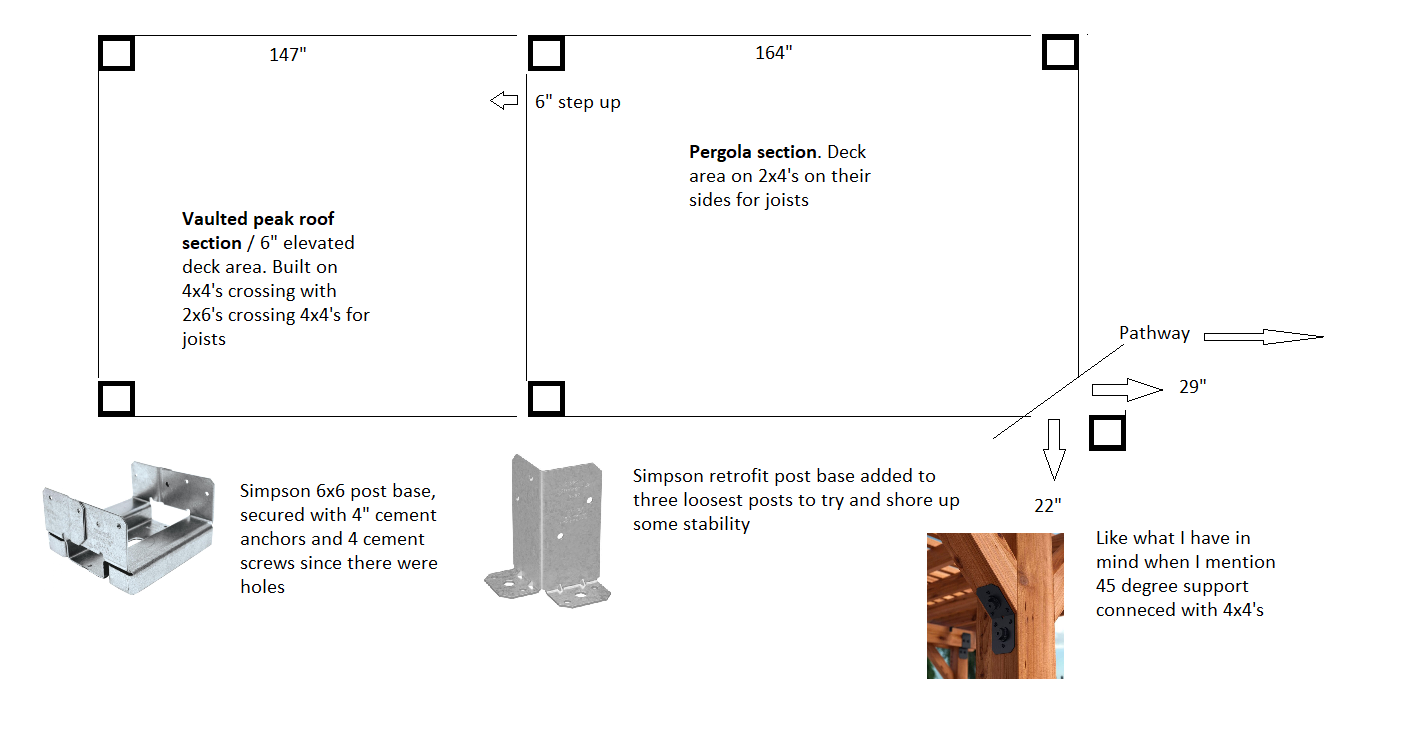 And, the issue at hand:

Primary issue: Wife didn’t want 6x6 pergola post in what is essentially the entrance to the side walkway that will be decked. Due to this I caved and moved the post off center by 24” south and 29” inches east respectively (see image link above, bottom right corner).

Everything built on old concrete patio, that far as I can tell is mostly 4” thick.

Lower deck level at door exits build on 2x4’s on their sides secured to concrete. I used 2x4’s as it literally fit dead on perfect with the elevation of the door bottoms. This section is 320 square feet give or take. Then upper level has 4 4x4’s secured to concrete, then 2x6’s crossing them for the joists. This gives me the 5.5” step up.

I mention all of that because I used the joists and shored up the 6x6 posts (all 8’) where I could, and I threw in an extra 2x6 joist for the pair of posts on the left, so they are very solid. The middle posts are before the step up (due to wanting vaulted section to match roofline), so I shored up the middle posts best I could with extra 2x4’s and retrofit post bases where I could, and did the same on the right ones.

The middle and rights posts have a bit of wiggle. I can’t really see them going anywhere, I think it’s just my choice to use an elevated Simpson post base to keep the posts off the ground along with the single centered cement anchor that is causing the wiggle. The cement anchor won’t be coming up, but there’s wiggle in it (first time doing this, or I would have drilled larger hole and used a 1/2 inch bolt put in with epoxy - had no idea they'd wiggle so much).

So getting back to my main concern, about that wonky post that is 24” south, and 29” east of the rectangle (measured from outside of post to outside of post). My idea for a solution since it’s on the pergola side would be to put a 45 degree 4x4 going from south to north, to then meet the 2x6 (or 8) beam coming from the northeast post. Then another 45 degree 4x4 going from east to west to secure the higher cross beam. Cross beams will either be 2x6, or if height allows 2x8 for extra support. They will then meet each other where the post should have been, and I will use a Simpson connector to secure them to each other (probably 2 or 3 – the ones that look like a cross basically).

I have to have the decking portion done by Friday (party sigh), which shouldn’t be an issue as the lower level is about done, and upper level joists are all in (just need to put in decking with a few custom cuts around posts). After the party I am almost tempted to remove the decking around the wonky post and go to war with the hammer drill to remove a 10x10 section of the 4” concrete patio, then dig down 3 feet, throw in the rock, and buy a 10 foot 4x4 and cement that bastard in.

Ok, so after all of that. Does anything think I’ll have issues with my idea of using 45 degree 4x4’s with shearing when it gets windy, or issues when that person leans against the post since I’m not building using 2 perfect squares? (I will be using heavy duty 45 degree braces, and using bolts to secure everything where I can. Otherwise heavy duty screw in deck bolts) The west side elevated square I’m not in the least worried about since it will be built like I’d build a shed with full covered roof. The east side pergola with that wonky post location as me stressed.

Appreciate any thoughts or ideas for a better solution! Thank you!

Edit 1: Images of the deck from straight on angles to show out of line post, and quick terrible image in paint to show where I'd put what I've decided are 6x6 45 degree braces so I can sandwich the 2x6 heading north/south, and the 2x8 heading east west (2x8 on the slightly longer span). For reference, the decking is east/west. https://imgur.com/gallery/oiS27fS

What you're trying to do appears possible, with a few extra parts. See here (forgive the crappy art, I made several edits): 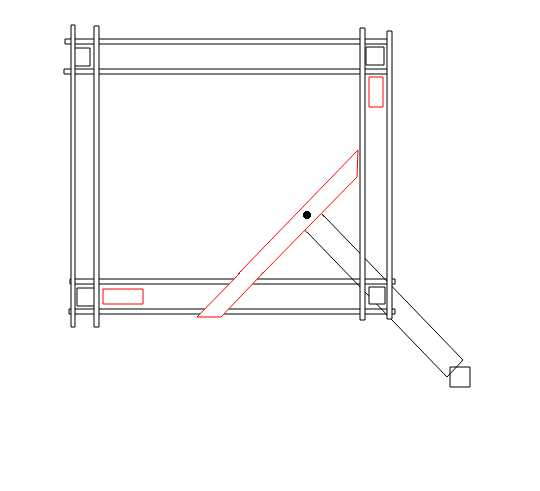 The two red rectangles are the beam-post braces I would add (minimally) to handle the horizontal loads which can no longer be handled by your odd post.

The post I drew where there isn't one is just a short floating section used to fix the two beams together.

What you need to build so your post does not need to be buried in concrete is a cantilever. Extend the 45 degree horizontal beam some distance inside the pergola. The longer you make it, the less load you will have where you join it thanks to leverage. I would aim for as much inside as there is outside. Fix the end to another 45 degree beam (shown in red). This needs to be rather strong as it will be handling roughly the weight of that corner of the pergola. Except that end will be trying to move down, not up. Think of that joint as hanging a large weight on the red beam.

I've shown the red beam as resting on the 2x6 beam, but attached to the side of the 2x8 beam. It should be easy to find some kind of metal L you an screw to the 2x8 and rest the beam onto.

The connection between the two 45 degree beams could be a large bolt down the center, with appropriately large washer. They will be about 6 inches apart vertically as the red one is over the 2x6 and black one under, so that would likely be easiest. But it's also possible to insert a short section of wood and use steel plates to fix both ends to the beams properly.

I also suggest resting the 45 degree beam on top of the post, with some minimal fixing to keep it from moving around. I would drill a hole from the top and drop a rod which will not rust in it. Same deal where the 45 degree beam meets the tiny floating post. A lag bolt from below would do fine. Or any kind of screw you can get that's long enough, it won't be pulling anything but its own weight.

With that setup, your odd post does not even need a brace to the horizontal beam to hold everything up. But it will help overall stiffness to have one.

If you go the "10 foot post into concrete" way, I suspect you will find your post slowly tilting towards the pergola over the years. But that's just an educated guess.

5
How do I keep my corner pergola from wobbling?