What might be wrong with my sewage ejector pump?

I'm trying to get my sewage ejector pump in my basement working as it used to.

The problem is when it runs water pumped from it gushes up the water softener's outlet drain. I thought the vent was clogged (a dedicated vent ran out of the side of the house, with an elbow on top to curve it down) but I ran water down it yesterday with the hose and the water seemed to make it all the way to the pit, didn't back out of the vent or anything.

Here's a picture of the drain setup: 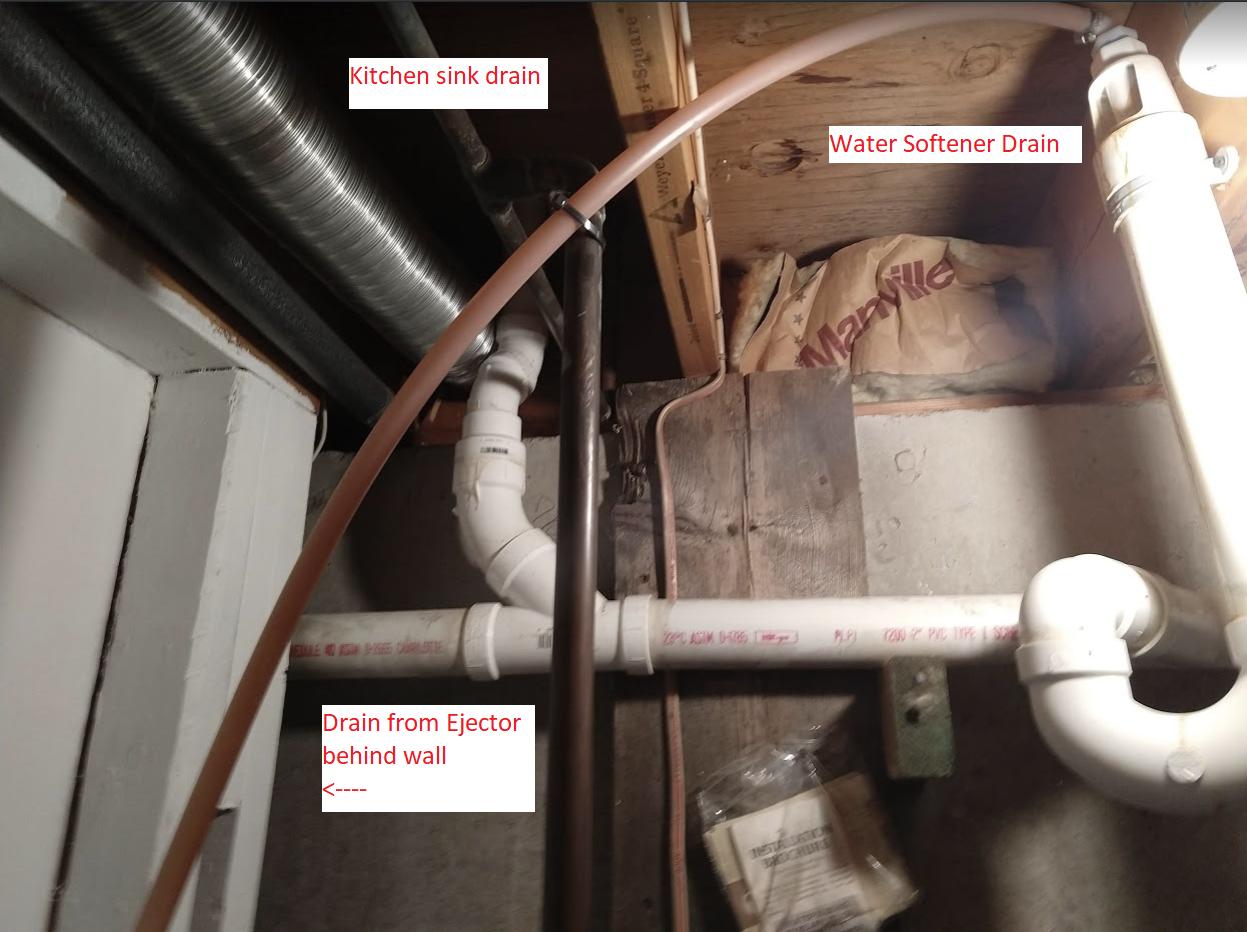 I didn't include a picture of the line from the pump because it is between the concrete and interior wall seen at the left of the picture, and I couldn't get a very good picture.

As far as viewing the actual pump, it is underneath a wooden platform that is screwed in the basement bathroom, and I haven't accessed it. It really shouldn't be clogged though, the bathroom hardly gets used, and this has happened in the past week or so. However the pump does run occasionally because some water from the sink/dishwasher above makes it into the pit despite the bathroom it not being used, which is another, less pressing issue but it might be relevant.

The pump is an Everbilt ESE50W-HD if relevant, not giving us trouble until recently, came with the house we bought a year ago. Any advice is appreciated, really thought it was just an issue with the vent.

Is it possible that it also relies on the main vent stack that extends out of the roof starting at the right of the picture? I would think an issue with that would present problems with drains in general so I expected it to be localized to this one vent or if not the vent the pump itself. Also the septic tank should not be full as it was emptied last year and there are no other indications of this such as the upstairs toilet backing up (there is no alarm).

If it has been working fine and this is a new problem then it seems like your waste line is plugged. Basically what's happening is your pump is pumping the waste and because it will not go through the waste line it's going up the water softener drain. The fact that water drains into the pit really isn't relevant. Also the upstairs toilet may tap into the waste line after the blockage, which is why that toilet works fine. If the vent is plugged it may cause some draining issues but no draining issues if the waste being pumped out. From the picture it looks like you have a good spot to put in a clean out so you can rod the waste line.

Not the answer you're looking for? Browse other questions tagged plumbing drain-waste-vent pump or ask your own question.