For the last month or so I've been getting a strange smell in my house that we bought 6 months ago. The smell is not obvious, but smells a little burnt to me, but my wife thinks it smells like a stink bug.

I measured the voltage using my volt meter of these wires, and got very strange readings. Note there are 2 white wires, a black wire, and a bare wire. (picture attached)

So that is very wierd. I would guess the 14VAC is just some stray capacitance. But why is there a 72VAC? the White1-White2 having a difference is also very strange, I wonder if whoever installed it a long time ago got the wrong colored wires.

So, give these 3 pieces of information, any theories on what is going on? 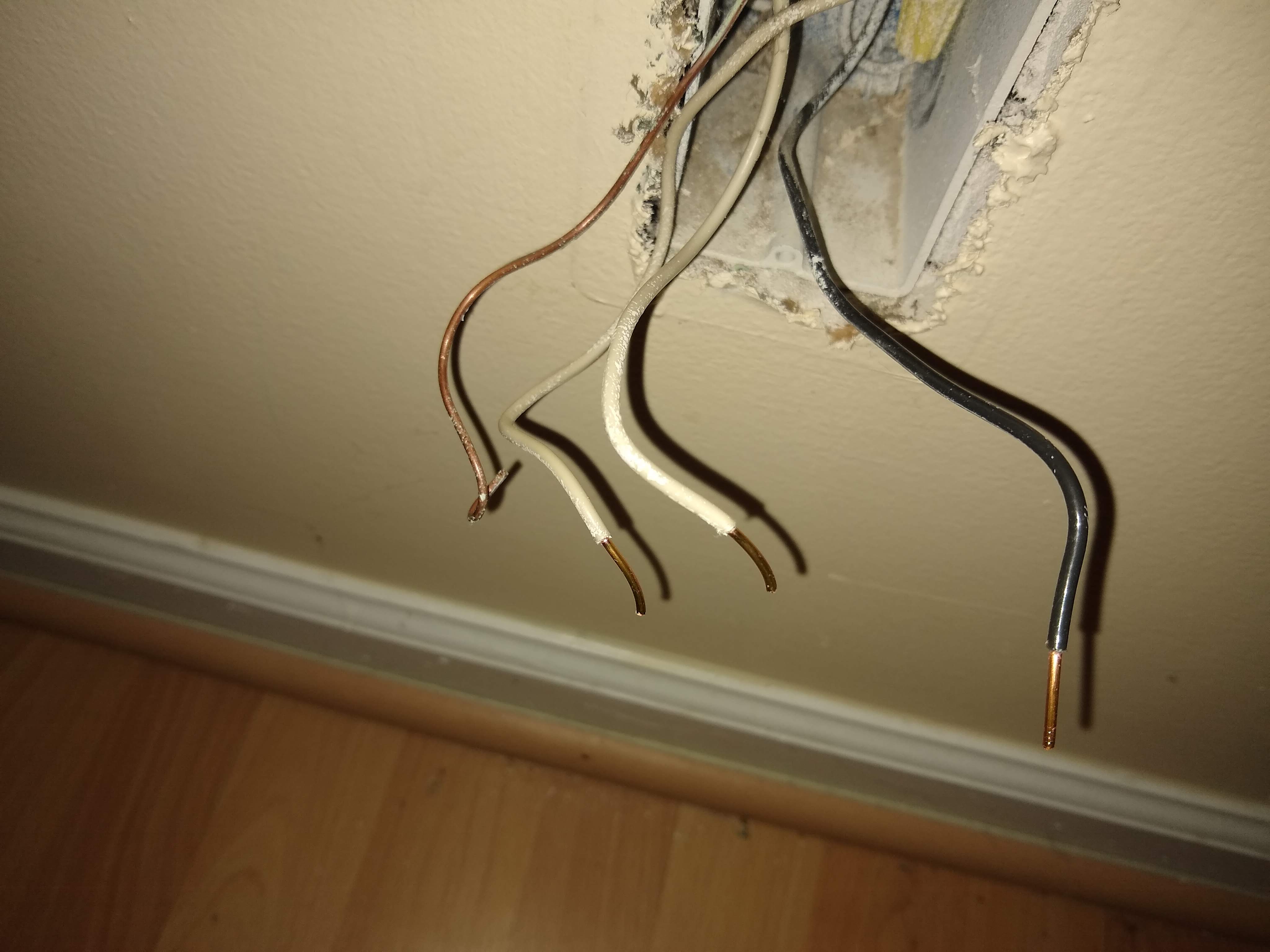 There are 3 big sheathed "bundles" coming into this box. The black wire comes from the bundle in the top right. The 2 white wires each come out of a separate bundle (top left and bottom left).

Also, there is only one black wire, but 2 white wires. Previously, one of the attachment points on the outlet that should have been another black wire was left unattached to anything. 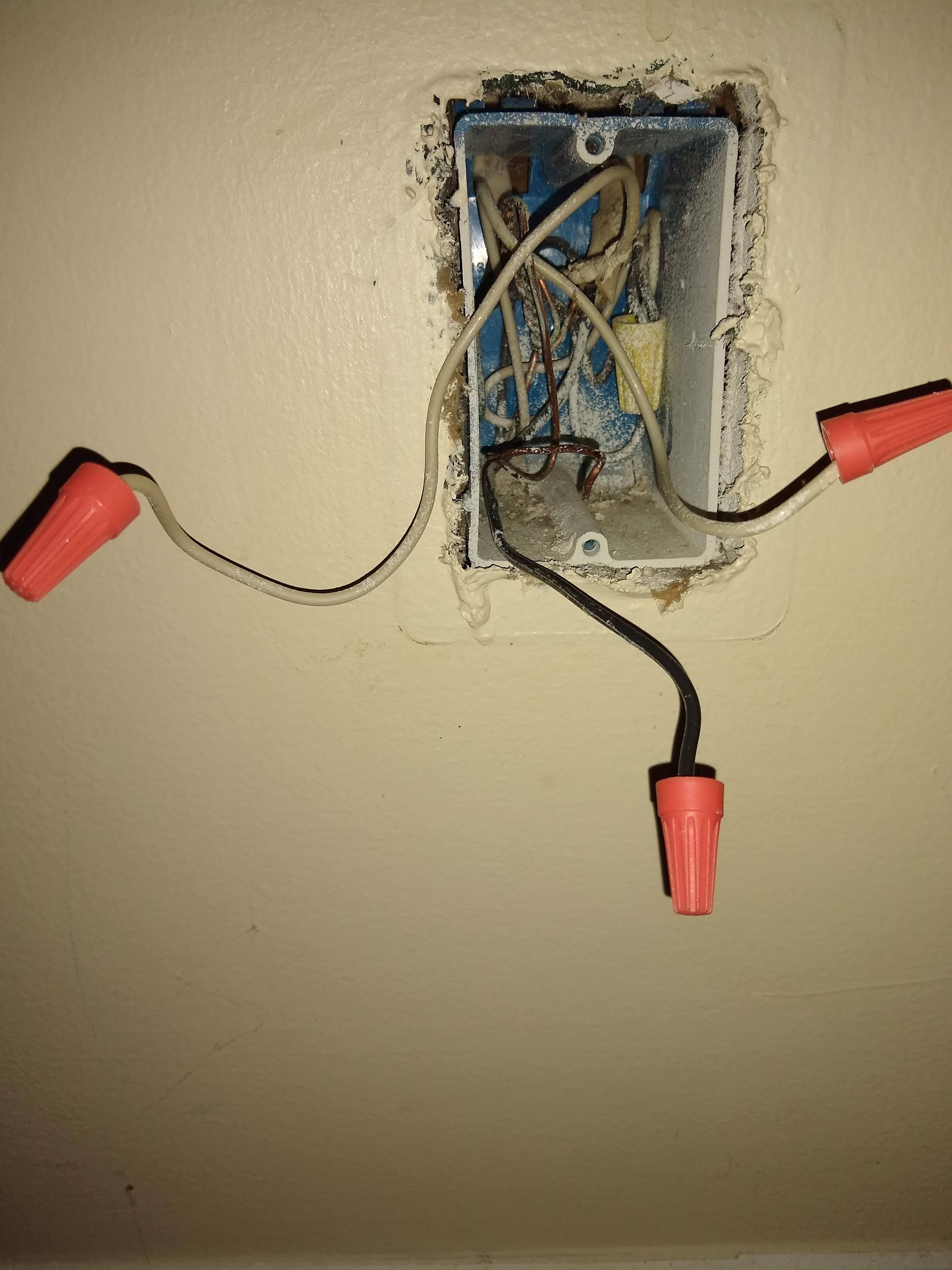 Couple things you failed to mention. First, this outlet is controlled by a switch. Second, other outlets died when you removed this receptacle. Those are both important clues.

The loose black wire, is a switched-hot coming back from the switch. Conventional color code is red; mark it red.

The bundle of 3 wires in the back, 2 black 1 white, are all always-hot. Conventional color for that is black; so mark that white wire.

In a switch loop, you're supposed to use the white wire for always-hot, so it's more obvious to someone measuring that this is a hot. You're also supposed to mark it with black tape (no one ever does).

The remaining white wires are actually neutral. Mandatory color code for those is native white; you can't re-mark colored wires to be neutral.

White2 goes to supply, and it's where neutral is sourced. White1 goes onward to other outlets, however those outlets are now broken because you severed their neutral. Doing so makes the neutral hot, and thus, dangerous; which is why we put insulation on neutral wires.

To make this make more sense, splice and pigtail

Why is a neutral wire hot?

Shorting white1 and white2 simply restores that function, so now the downline circuit works again, and those appliances come back to life.

You should not be shorting things that were not shorted before: what is wrong with your brain? If the switch had been on, then shorting white2 and black (now red) would have given you a blinding arc flash, possibly a burn, and possibly more wire failures at the switch or anywhere upline. This stuff can get out of hand real quick. If you want to "short things", short them through an incandescent lamp.

Probably was electrical. My first suspect would be that wire-nut in the back of the box. I'd give it a pull-test (hold nut; yank each wire 1 at a time) and then tighten it up good-n-plenty. Then, I'd examine the wires and the old socket for any scorch or burn marks. If you cut the wires out of the backstabs instead of twisting them out, that was a mistake, for this very reason (also because wire length is precious). You'll have to dissect the old outlet to see.

To pull wires out of backstabs, pull steadily while twisting slightly. It may help to jab the release. Backstabs can't be used twice, but that's irrelevant if you follow most of our advice and avoid using them altogether.

This outlet was (half?) switched at some point in time

Looking into the back of the box, we find the missing link: a white wire, spliced to two black wires. This tells me that the black wire was the switched hot returning from an old-style switch loop at one point in time, but later work went and replaced the switch with a wirenut, rendering the receptacle always-hot. In any case, I would put a flag of black electrical tape on the white wire that's nutted to the black wires, to denote to the next person that it's really a hot, not a neutral.

Both whites you see coming out are neutrals, just going different directions

The other two white wires you see here, it turns out, are both neutral wires; it's simply that one is the incoming neutral from whatever powers this box, while the other is an outgoing neutral to further loads. It appears that the receptacle was being used as a splice for the neutral wires, as well, which isn't the nicest thing in the world.

I'd replace the receptacle with a brand new one here

As to the source of the burning smell, I'd suspect that the receptacle itself was on its way out the door, especially if it used those infernal "backstab" connections that have this rather bad habit of failing in a toasty fashion. I would get a spec-grade receptacle ($3, vs $0.99 for a 3 pack) a wirenut, and a small piece of 12AWG white THHN, then strip the ends of the THHN, use the wirenut to attach it to the two existing white wires, and then wire up the receptacle as normal, with the white pigtail to a silver screw, the solo black wire to a brass screw, and the bare ground wire to a green screw.

Not the answer you're looking for? Browse other questions tagged electrical smell or ask your own question.

4
How are wires wired together and where can I find that point?
1
Wiring an outlet with two white, one red, and a ground
1
How is this 3-way switch circuit wired?
2
Outlet giving off a burning smell
1
Ceiling box has 2 black and white wires but fan/ light only has 1 of each
0
Help with re-wiring a two circuit outlet with one controlled by switch
-1
Challenging wires in an outlet
1
Ceiling box has 2 black wires and 1 white wire
0
Replacing a wall outlet with three black and three white wires with a smart outlet with one white and one black wire