capacity of my electric panel

I see a 100 Amp breaker in the mains, which means my electric panel is 100 Amps. I see may arrays of circuit breakers on it, as many as 18. When I add the total amps on them, it adds upto 375 Amps.

I am trying to install a Tesla charger, which has a recommended breaker of 60 AMP.

Is there any possibility to support a new breaker? I do see empty slots. e.g., if I use 60 AMP charger in the night, I will not use any other appliance, will that work? please guide. of course, last alternative is to upgrade to 200 AMP panel, which is easy response.

If it wasn't a QO or Murray panel... I would say this is just too close. However, I think we can "cheat it", especially if you are willing to fit a subpanel.

I'll disregard the 120V loads for now; it looks like a gas dryer. Based on what you've mentioned, it appears the large 240V loads are

If there are others, do the same thing with them.

Add a subpanel for your large loads

So add a small (16 space) "QO" main-lug subpanel right next to this panel, and migrate your large loads there - the sauna, 40A/range, and whatever other large appliances I haven't deduced.

Feed that subpanel from an appropriate 2-pole breaker in the panel.

Interlock the subpanel and 60A EVSE breakers

With this beauty, a $20 QO2DTI generator interlock. 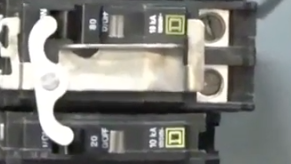 Note that normally, this is used where the breakers are backfeeding, and so the breakers need to be bolted down, requiring a separate bolt-down kit. However, since these are normal loads, they do not require a bolt-down.

Now you will need to turn off the one that's on, and turn on the one you want.

But it should solve the load factors in your panel. The 120V loads seem like a lot, but #1 they are split among the two poles, so it's only half what it appears; and #2 they are not likely to be all heavily loaded at the same time. Probably your worst loads will be your 120V A/C units, and you should make sure there are evenly loaded on the 2 poles (2 on each pole).

Overall adding breakers to empty slots is not an issue. What is a major issue is that the combined currents of all appliances that are turned ON must NOT exceed the rating of the main breaker. Ideally you want some safety room as well, at least twenty amps to spare.

The reason for a safety margin is that when large electric motors startup the current can briefly be three times the run current, assuming the motor is not overloaded. You should NEVER encounter a situation where you are consuming most of what your breaker panel can offer.

To run your Tesla charger make sure other high current loads are manually turned OFF. This is the compromise you have to make, or fork out lots of money for a 200 amp panel.

This really feels too close. You only have 40A available once the charger is going, and you run the AC at night. Heating/cooling is one of the biggest energy usages in a house, and that doesn't stop at night. I think downgrading to a 30A charger should be safe, (and will still recharge your car overnight.)