I was changing a switch in my house when I found a number of connections in the electrical box that were soldered rather than secured with a wire nut. The solder joints look very well done, the conductors were twisted together nicely and the solder itself was nicely done. It was not some oxidized amateur mess. These joints were then wrapped in electrical tape.

Is that something that need to be concerned about? Would it count as being up to code on an inspection?

I am in rural Minnesota, outside city limits, in an un-incorporated township. I do see several inspection stickers on the breaker boxes in the house, so something was inspected at one point.

Update: Just to add a bit more context. The house was constructed in 1961 and was a Gold Medallion home and as a result had lots of fancy electrical features for the day. Much of that original wiring has been replaced with modern NM cable, however the switch I replaces was on an older circuit with wires that look similar to Romex but have a braided outer sheath and instead of a single ground there a several smaller grounds that are wound around the the other wires.

The solder joints in question were on both types of cables in the box. So, they would have been done as part of later work. One of the previous owners was big into Ham radio, this junction box was right outside his radio room. In another conversation someone suggested that this was done to reduce interference, could that be a thing?

There are better ways

A wide variety of reliable splice techniques now exist. The reason for soldering "back in the day" was that manufacturing wasn't really up to making "wire nuts" and "Alumiconns" in billion quantity. And labor was a lot cheaper. Today, it would be nuts to use that technique, but I wouldn't condemn old work that has stood the test of time.

I expect your electrician will see it the same way; if you presented new solder work done this way, forget it, but old work would be grandfathered.

Insulation is also a problem

The usual Home Depot advice is just put a booger of PVC electrical tape onto it. Actually, the ancients used layers of both "friction tape" (tar impregnated cloth tape) and rubber or plastic tape. The friction tape's job was to protect it from physical damage, notably bare corners or burrs from punching through the tape. This is complicated enough that I don't advise it; in fact, I don't even like using split bolts or other uninsulated splices. When solder was used in mains wire, this work was done or overseen by a master electrician, and the electrical inspector relied as much on personal experience trusting that master.

The layers of insulation also make the joint uninspectable. If an inspector saw a soldered rattail splice today, he'd have good reason to either assume it wasn't soldered, or that it was not properly insulated.

In mains wiring a lot of engineering is done to assure we're not wasting copper. Wires are intended to heat up, and are generally run at sane thermal limits.

Solder only has about 1/10 the conductivity of copper.

Now look at how modern soldering is done. Here's a surface mount power jack. You see the tiny tabs meant for the solder connection? 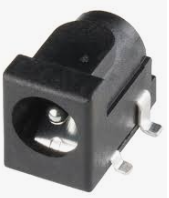 This is the mentality of modern, electronic soldering. Put a tiny dit of solder there (even if you drown that tab in solder, there's just not that much tab there) and call it good. That works because currents are small - that connector is rated for 1 amp, the limiting factor being the surface area of the solder.

I don't believe the Western Union splice is a lost art you should be re-creating, because there are better ways to do this today, and it would be difficult to re-create it properly without apprenticing under an experienced master.

(B) Splices. Conductors shall be spliced or joined with splicing devices identified for the use or by brazing, welding, or soldering with a fusible metal or alloy. Soldered splices shall first be spliced or joined so as to be mechanically and electrically secure without solder and then be soldered. All splices and joints and the free ends of conductors shall be covered with an insulation equivalent to that of the conductors or with an insulating device identified for the purpose.Wire connectors or splicing means installed on conductors for direct burial shall be listed for such use.

The sentence about splicing or joining first could be as simple as twisting the wires together. It's not saying there needs to be a wire nut or other connecting hardware. The most common method seen in junction boxes is the rat tail splice

There are other parts of the code that prohibit soldering on service wires and on ground conductors, so this isn't a blanket OK for all splices. However there may be places in existing electrical installations that would not be code compliant today, but were code compliant when installed, and therefore legal now.

This has been in the electrical code a long time. These days, nobody splices connections. I am not sure you'd find a solder that's "identified for the purpose" available today, and 110.14(A) requires that.

At one time solder was the main way to splice. As far as I can tell, workmanship was impeccable in those days. Or maybe it's only the really good work that has lasted all these years. At any rate, my experience has been the same, soldered splices are rock solid even 100 years later.

But that was a long time ago. When you see soldered taped connections, it's usually best not to touch anything if you don't absolutely have to. The insulation is likely brittle and fragile with age, and if you start messing with it, you could wind up with a much, much bigger project than you started with.

Soldered connections are acceptable, with a few caveats...

I don't have the NEC at hand, but this is my understanding. The third point there is key. Electrical tape is not an ideal insulation technique (it's a bit cumbersome and ends up gooey over time), so you're left with nuts or something else. If you're adding a nut, just use a nut.

In your case, I'd add nuts over the existing joints (rather than re-taping them).

As the other answers cover, this is allowed by code.

From a practical standpoint, it's fine if you have proper strain relief, such as wire clamps where the wire enters the box -- but solder connections are much less forgiving of improper strain relief than other connection types. The reason is that solder is a very good electrical connection, but a very weak mechanical one. Copper (or aluminum) alone can bend, flex, and even stretch a bit without any damage, so it's suitable for things that move around a bit. Solder is very brittle and will crack and break if you try to flex it.

So if your soldered connections are between wires securely clamped in a junction box you rarely access, it's nothing to worry about. If the wires are not clamped, such as might be the case if they're in conduit, I might add some additional strain relief or clip the solder joint and replace it with a wire nut. Just make sure that even if someone pulls on the wire, it's not going to transfer any of that strain to the solder joint.

Code states that solder cannot be the only means (the twisting is a mechanical connection, the tape is the insulation. The one place I find solder not allowed on ground wires , on heavy duty pin and sleeve connectors is the ground pin, the ungrounded conductors are soldered and the ground is clamped (funny because this is also the failure point in most of these cords.) but twisted and soldered connections are legal but normally only seen in knob and tube wiring.

According to rule 110.14, it is not against NEC code to have soldered electrical splices as long as it conforms to their rules. This can vary depending on local jurisdictions, but if it is considered old work, in most cases it would grandfathered in unless deemed to be a fire hazard.

If you find soldered connections in your home, they were most likely done prior to the 1940s. The insulation on old wires can become brittle over time, almost like glass and can crack just by being handled. You're better off not touching any of it unless there is a problem. Back in the early days, electricity was considered a luxury, and the installations went above and beyond modern code. Wires were isolated from the structure of the house by ceramic posts, and fed through ceramic tubes if they passed through the framing (knob and tube). The only caveat is that there is not a separate ground wire, and early outlets are non-polarized which can be a shock hazard. The old wiring is fine for low power applications such as lighting, but should be avoided for household appliances, and any electronics.

110.14 Electrical Connections. Because of different characteristics of dissimilar metals, devices such as pressure terminal or pressure splicing connectors and soldering lugs shall be identified for the material of the conductor and shall be properly installed and used. Conductors of dissimilar metals shall not be intermixed in a terminal or splicing connector where physical contact occurs between dissimilar conductors (such as copper and aluminum, copper and copper-clad aluminum, or aluminum and copper-clad aluminum), unless the device is identified for the purpose and conditions of use. Materials such as solder, fluxes, inhibitors, and compounds, where employed, shall be suitable for the use and shall be of a type that will not adversely affect the conductors, installation, or equipment.

Not only is soldering allowed by code, but since wire nuts count as part of "box-fill" it can be a way to allow more wires in a device box of a given volume that would otherwise be permitted. Planning to avoid the need to do this is of course preferred, but it's worth knowing about.

The main reason soldering is no longer in general use is simply that it takes many, many times longer to solder a connection (and then insulate it) than it does to use a wire nut, which both connects and covers the bare wires in a single operation. At your electrician's hourly rate it would likely double the cost of a job.

Not the answer you're looking for? Browse other questions tagged electrical code-compliance or ask your own question.

12
Is this electrical junction up to code?
6
Mount ceiling fan without electrical box
1
Should in increase wire size for a well sub-panel?
4
Is this wiring correct for outlet and junction box?
2
Re-purpose 240v wiring from electrical baseboard heat as 120v circuits
2
Typical requirements for electrical final inspection?
3
What type of electrical boxes should I use for outdoor fixtures when fiber cement trim openings are narrow & shallow?
7
Was this installed to code and is it still to code?
3
One meter (200A service) feeding two main electric panels 100A ea, is it legal?