Is there anything to be concerned with this picture?

I just got a W/D combo unit that only needs a 120V outlet and my laundry room only has a 240V outlet. Rather than converting the 240V to a 120V, I want to be able to have both 120V and 220V outlets for flexibility and I noticed that my circuit breaker panel actually has a 20A circuit labeled "Washer" and a 30A labeled Dryer which controls the 240V outlet.

I also found a blank plate in the laundry room half way up a wall and I opened it and found wiring. I attached a picture of what I found and there are four pairs of wires in there.

It doesn't look like there is any ground wiring and so I will need to make sure the box is self-grounded, but if it is, does the condition of the wires cause anyone to think that installing an outlet there is more dangerous than normal (assuming I can find the wiring that comes from the 20 A "Washer" circuit)? Thanks in advance.

[Wiring behind a blank plate 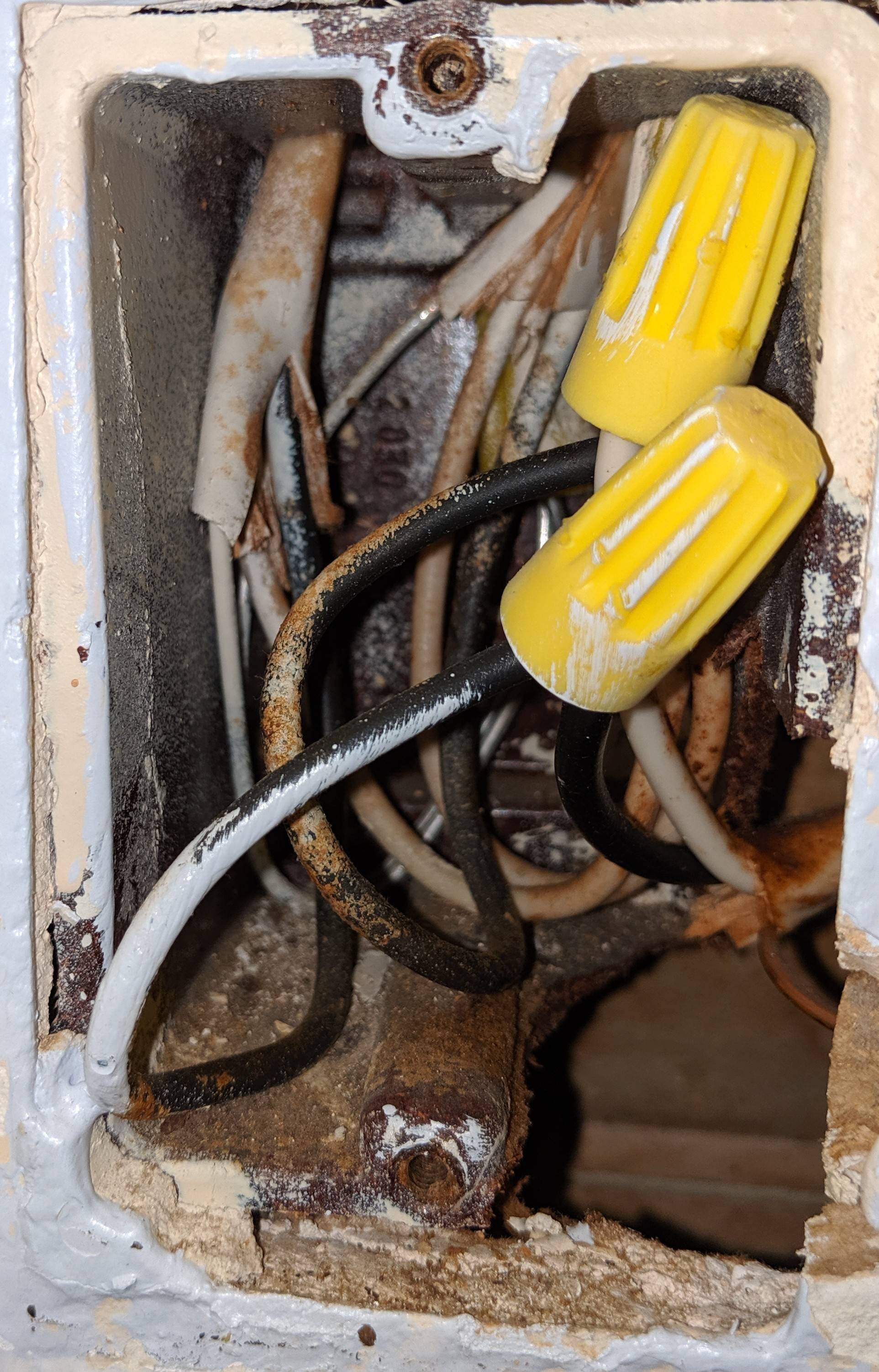 Here is a picture with the wiring moved out of the way a little bit. I am assuming now that the shiny metal wires in the back are the ground wires, is there any reason there are two and they are twisted together?! Also, not sure what the two white insulated wires are doing connected inside the box too, just wiring for down the line? 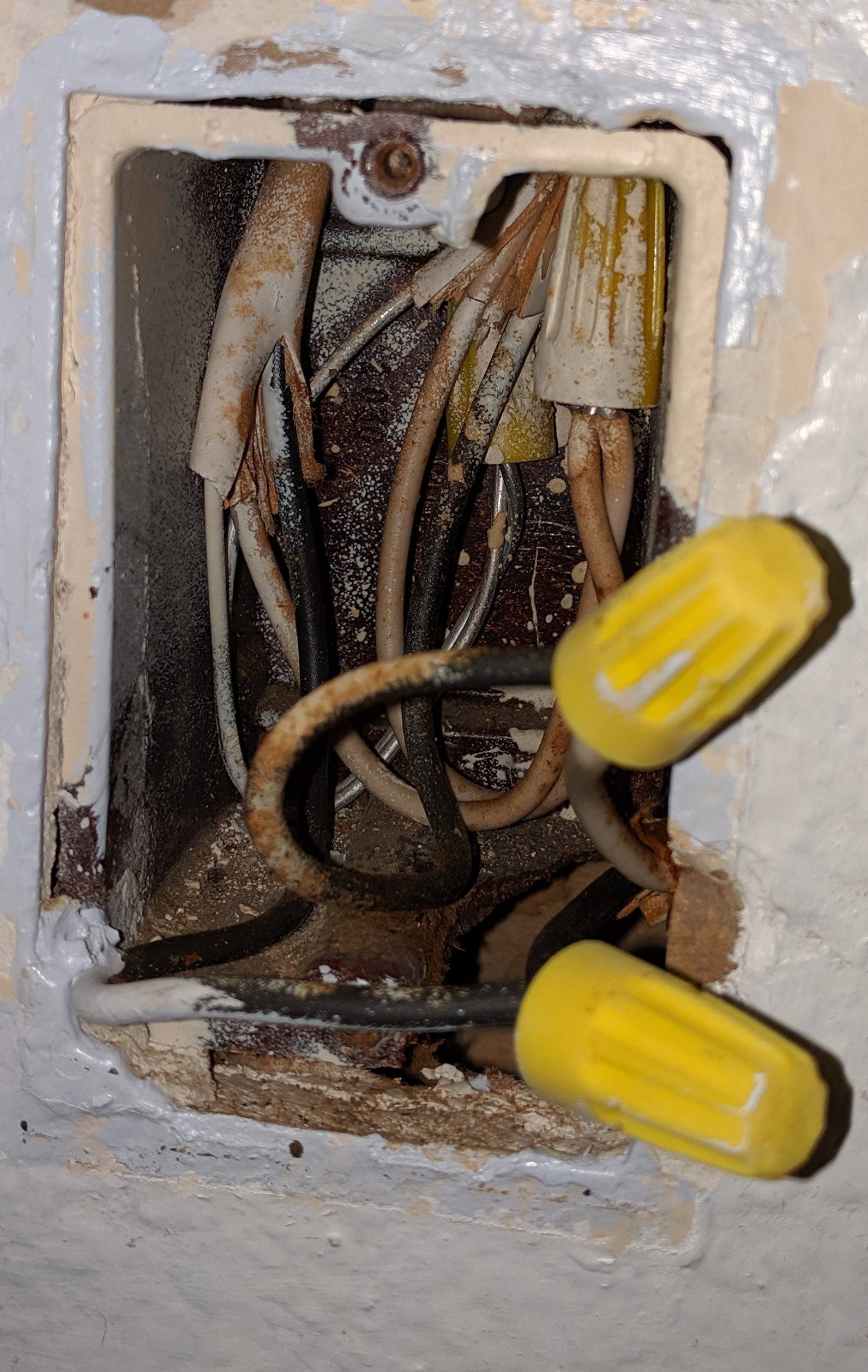 So I just tested the wiring with my non-contact voltage tester. After switching the circuit switches in the breaker box off then on, only one black ever came live, and it was the one twisted connected with the white. The bad news is that the circuit switch that turned it on was the 15A circuit for the downstairs bathroom fixtures and outlets. I guess I am going to need to just convert my 220V to a 120V as the most cost-effective solution. Thanks for everyone and their responses.

That junction box had a fire.

It melted the lower side of the box. Probably nearly burned down the house.

As for the cause of the fire, I see plain wirenuts and aluminum wires. Obviously this wire-nutting is contemporary to the fire, but the apple doesn't fall far from the tree, eh? This is probably the classic situation of faulty terminations on aluminum wires, but for all I know, the aluminum wires were innocent bystanders and this was an incompetent wire-nut job on copper wires. Aluminum wires need terminations rated for them. Not having those is what caused the problem in the 70's.

So replace that box with a metal one less likely to catch fire; I recommend a 4-11/16" square steel box with a 1-gang or 2-gang mud ring, as you need a lot of room for 4 cables, grounds+clamps, and a receptacle or two. (5 sq.in. Each). That box was surely overstuffed if it had a receptacle.

Evaluate wiring throughout the house

Particularly aluminum wiring. You want to see if wiring like this is typical in this house. If it is, we need to emplace some strategies ASAP to protect the house.

The first line of defense against shoddy wiring is AFCI breakers. These listen to the wires for arcing faults (like the one that started that fire). That classic GE panel is still fully supported (mostly; GE made some changes to bus stabs that might affect you; ask a new question about that).

AFCIs do not come in double-stuff breakers, so noting the use of a few double-stuffs, you might need to combine a few circuits in order to fit AFCIs. It's worth it.

I do not like the rust pattern on it. It makes it look like the humidity source is on the inside, and I would expect if you took that cover off, you'd find a sea of rust. Not cool.

Also, if this is a "Rule of Six" (six main breakers) panel, that is a showstopper. Get rid of it.

I would stay with GE, nothing wrong with it. However, if space is a premium, use Eaton CH or Square D QO (Eaton has cheaper breakers, but QO supports generator interlocks better).

Also, plug the humidity source! Probably a conduit pipe that goes outside.

There is no such thing as a self-grounding box. Boxes cannot reach through the mystical aether and obtain a ground. They can pick it up from ground wires, but here you have the problem that these are aluminum ground wires, and only a limited number of devices can splice to them.

It might be fairly naughty Codewise, but you could buy accessory ground bars for panels, cut them up, and then fasten them down in the back of a metal junction box. That may be cheaper than using an Alumiconn to pigtail to a metal box.

There are two potential issues I see here.

One, it looks like that box was mangled and another cable pulled in and tapped to feed something else. The mangled box should be fixed in any event. It may be a code violation (depending on your locale) and may very well overload the circuit if you add the washer-dryer combo to whatever was added.

Two, that looks like it might be aluminum wiring, in which case you'll want to be very careful working with it at all, and may be best off calling an electrician rather than DIY.

Your panel looks to be in rough shape is it attached directly to a concrete wall? I see ground wires in the box one is copper and another may be aluminum but it might be tinned copper close to the insulation out of focus their may be copper showing where the tin was scratched so you need to make sure of the type of wires first. The box is not metal so it is not self grounding.

I would get a 15 amp outlet that is AL/CU rated with back and side terminals , not a cheap house grade, use that for the junctions instead of wire nuts especially if any of those wires are aluminum. If you still require additional wirenuts make sure to get alumacons there are several different types but most are purple in color.

DO NOT USE STANDARD WIRENUTS ON ALUMINUM WIRES!

If there is aluminum and copper mixed using a al/cu listed outlet is a safe way to make the connections, alumacons or the purple wirenuts can be used to make splices within there listing sizes and types but I never felt as secure with them after having some failures back in the 70’s.

If your old fiber box is not in good enough shape to hold the receptacle securely I would break it up and install an old work box to house the splices and receptacle.

1
Wiring an outlet with two white, one red, and a ground
5
What's wrong with this wiring?
3
Can I add a 120v branch for a washer to a 240v dryer circuit?
1
Two Poles Three Black Wires and One White - Convert to 120 V Outlets
4
Splicing building wire cables to accommodate door
1
Solve washer/dryer closet outlet issue. Lacks 110v outlet, need to know my options
0
Is This Two-Phase Outlet Wired Correctly?
0
How can there be voltage in this electrical configuration. Is there a short?
0
Best way to set up new outlets in workshop