Help debugging this circuit, voltage across lights drops to half unexpectedly. Diagram in post

I fitted a PIR sensor at my parents' to turn the bathroom light on and off automatically last week but the lights are very dim. On inspection, there is only half of the potential difference across the bulbs and I have no idea why. I'm fairly electrically literate but I am at my limit here so hopefully one of you folks can give me some pointers.

Previously, when the lights were operated by a simple switch, the live was switched and the neutrals were connected in the loft above.

According to the wiring instructions for the PIR sensor, the live and neutrals should be a constant supply to the sensor, with a third feed that becomes live when the circuit closes (when someone enters the room). I have drawn a circuit diagram to illustrate how the circuit looked on the old setup (which worked the lights at full brightness/full 230V potential difference [I live in the UK]), and now, at 115V. 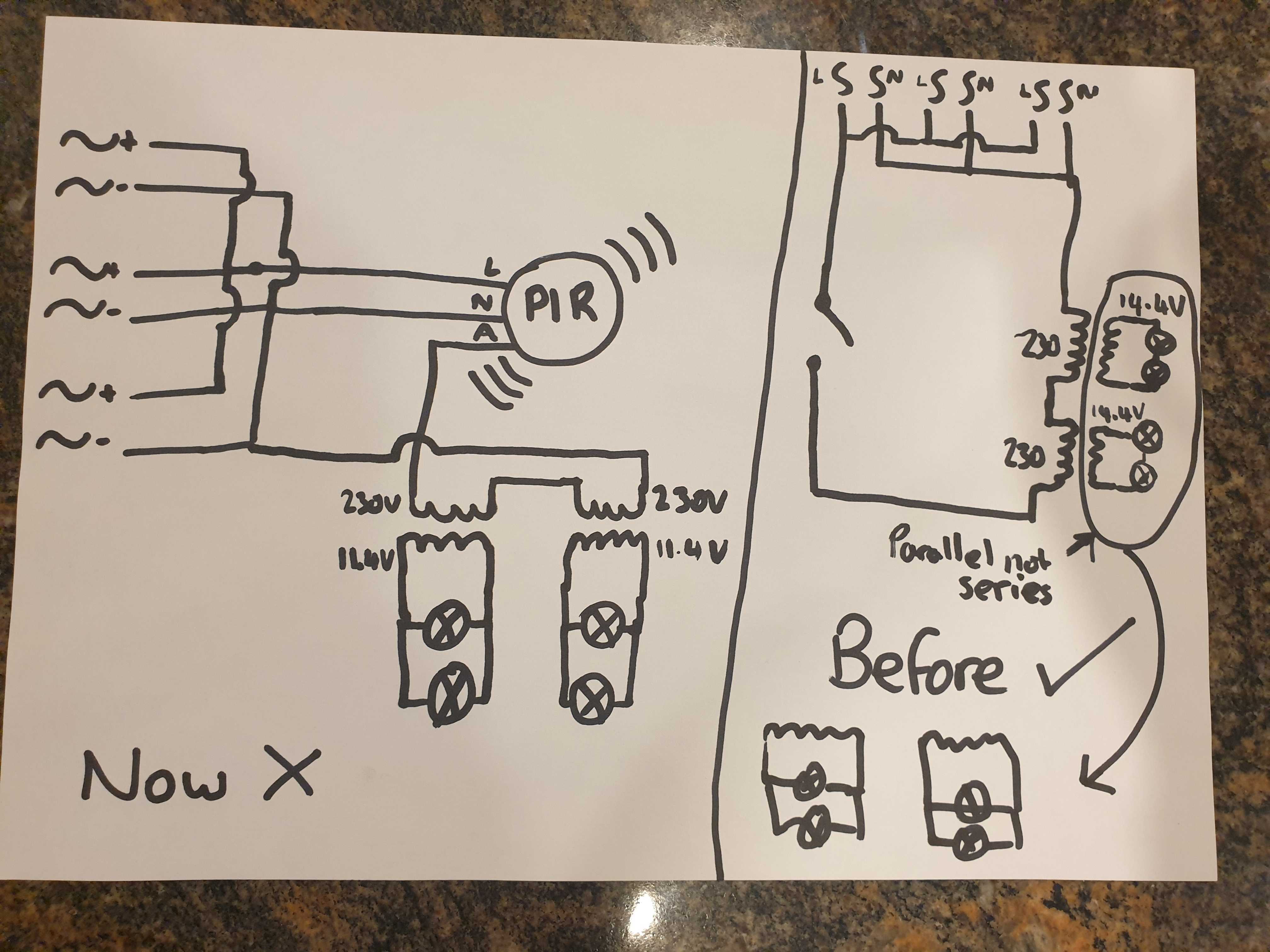 Before on the right, now on the left. Note that the bulbs are wired in parallel both before and after (I drew them wrong). This to me would be the first thing that looks amiss, however this was the case before and they worked just fine. The 3 feeds coming into the junction box are go off to different parts of the house's lighting main, unrelated to these lights.

I grabbed a voltmeter and took some readings across some noteworthy points in the circuit:

At the PIR sensor, the potential difference between the live and neutral terminals is 230V, as expected.

When the PIR sensor is closed (on), the potential difference between the output (A) terminal and neutral is 110V, not expected, should be 230V.

This issue is happening before we even get to the bulbs (which are 11.4V LEDs on transformers, I expect there are also bridge rectifiers built into the transformer modules), so the issue must be with my wiring, but I can't see anything untoward.

Any and all suggestions gladly received! TIA

To work out the problem I would recommend you temporarily go back to your exact "Before" wiring arrangement (including the manual switch) and verify that everything still works normally.

Then with that same wiring, connect the PIR power wires to the two input AC lines. Then test the PIR unit using a standard 220VAC bulb connected between the "A" line and the opposing AC wire you believe is correct. If that testing works remove the 220VAC bulb and connect up your transformers to the same wire points.

If you leave the manual switch in the circuit you would then have a backup method to light the small bulbs in case the PIR unit ever goes bad.

Not the answer you're looking for? Browse other questions tagged lighting low-voltage motion-sensor or ask your own question.

3
Low voltage on circuit after breaker turned off - induced or backfed voltage?
1
What thickness cable should I use to wire these outside lights?
0
electrical lighting circuit trip
0
Can replacing LED light bulbs cause electric faults somewhere else in the house?
1
Motion sensor with bypass switch?
0
Motion sensor issue