I have "recently" created an addition to my house here in CA. The original house had a 200 amp manual transfer switch for a backup generator, but this only feeds the old part of the house via a 100 amp subpanel, and I want to change things to feed the entire house.

The new part of the house also has a 100 amp subpanel. Each sub panel is fed via 100 amp breakers in the service panel and CU THHN/THWN(-2) wires.

If I feed the 200 amp transfer switch via a 200 amp breaker, ie remove the individual 100 amp subpanel breakers/circuits, is it a code violation to have the 100 amp breakers ONLY at the subpanels, aka downstream of the service panel?

I am looking at a cost effective way to allow the generator to power the entire house and I can't upgrade the transfer switch with additional poles or add breakers to it.

Thanks for any suggestions! 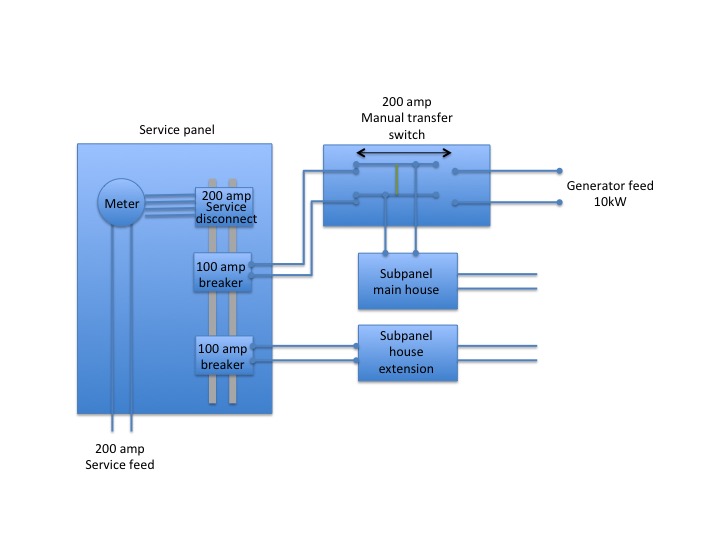 Connections are made from the load side of the 100 amp breaker to lugs in the switch using using CU THHN/THWN(-2) wires.

The same type of wire is used to connect the lugs in the switch to the orginal subpanel which is about 8 feet away inside the house.

Connections are also made from the load side of the other 100 amp breaker to the subpanel in the new extension to the house using CU THHN/THWN(-2) wires which is about 60' away. 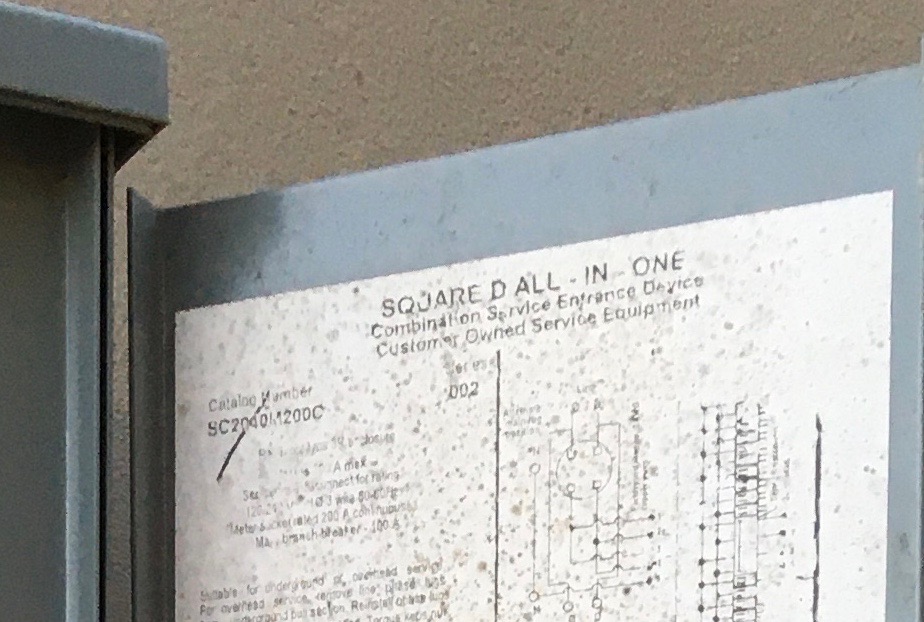 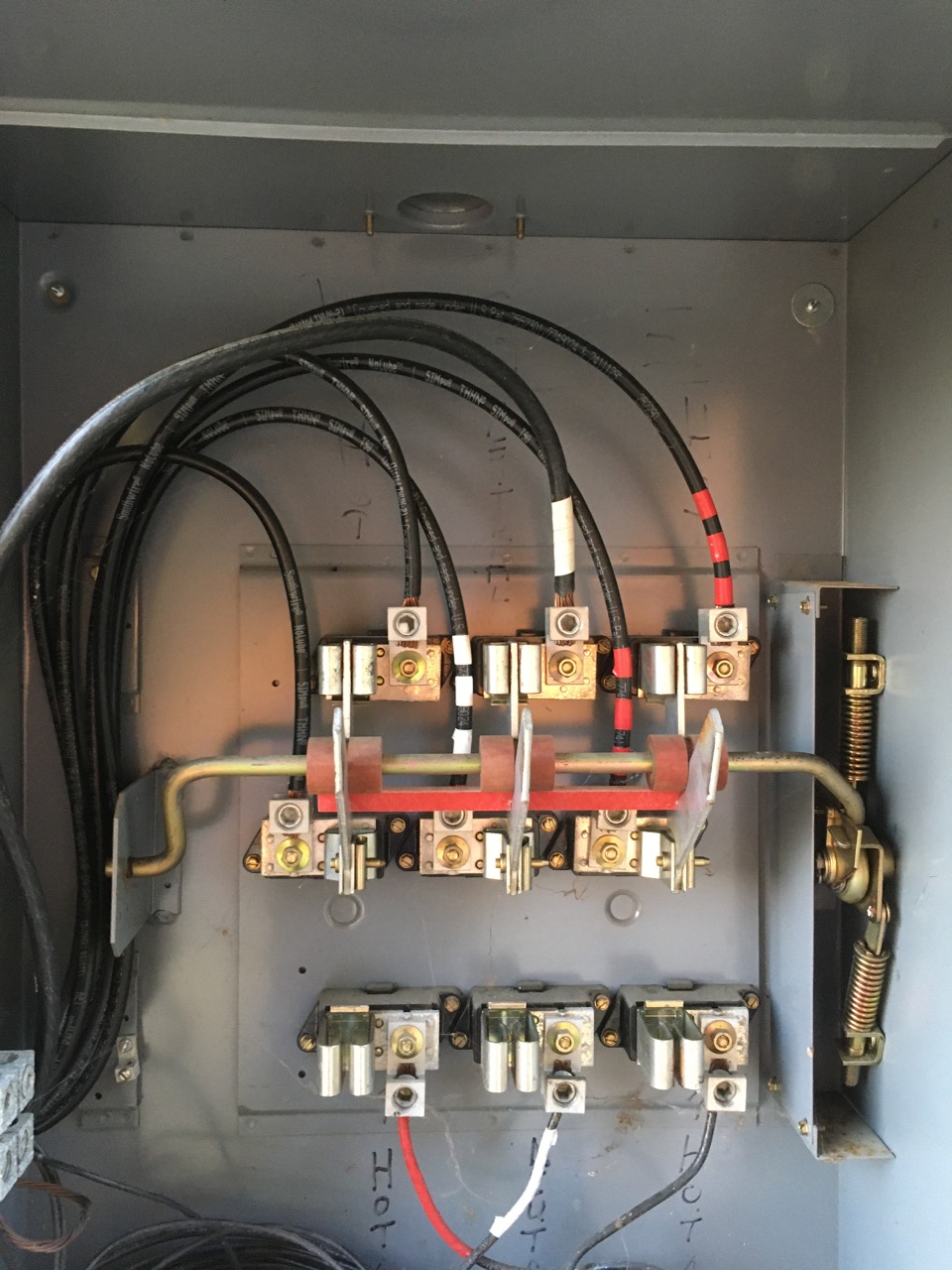 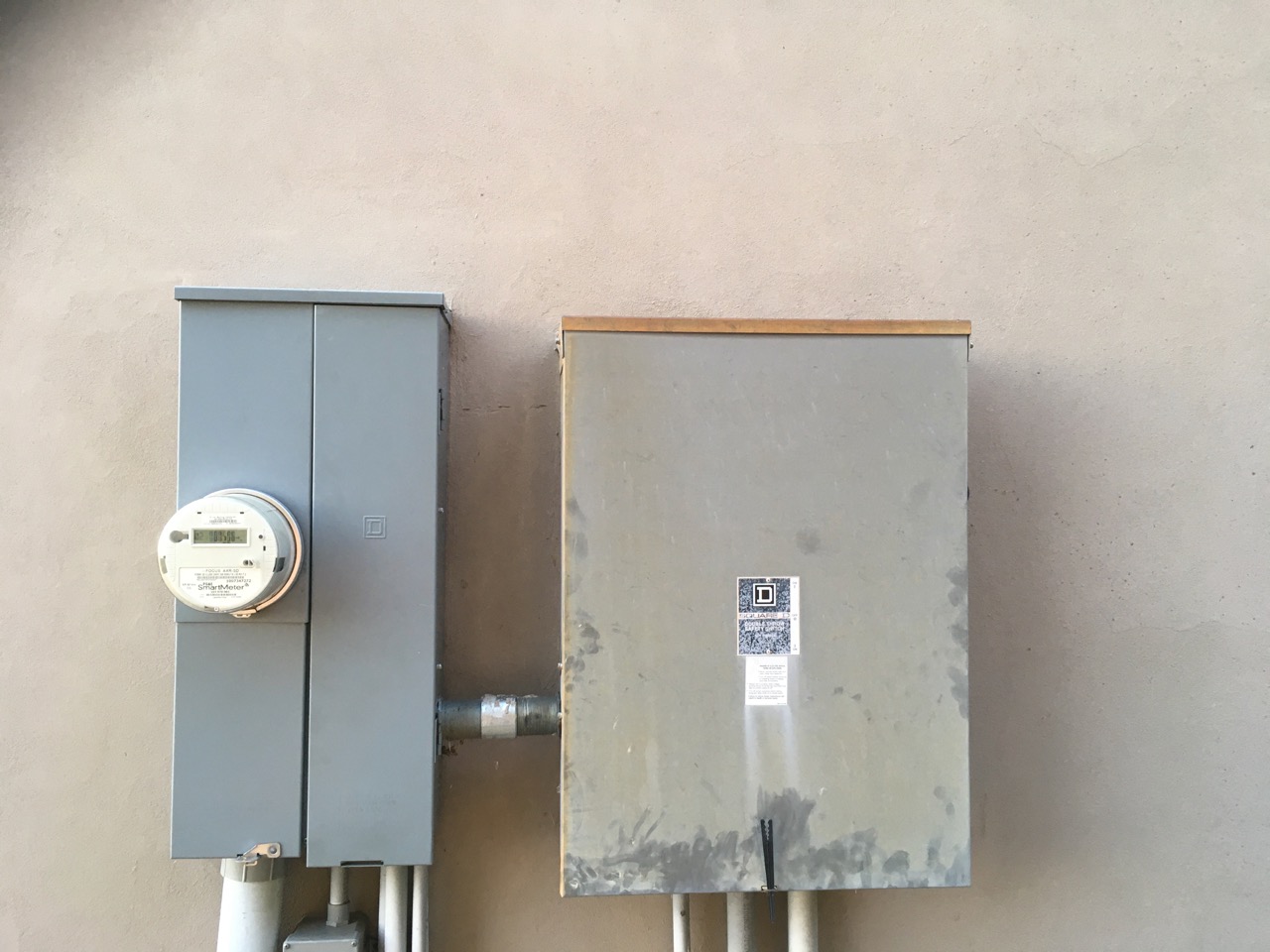 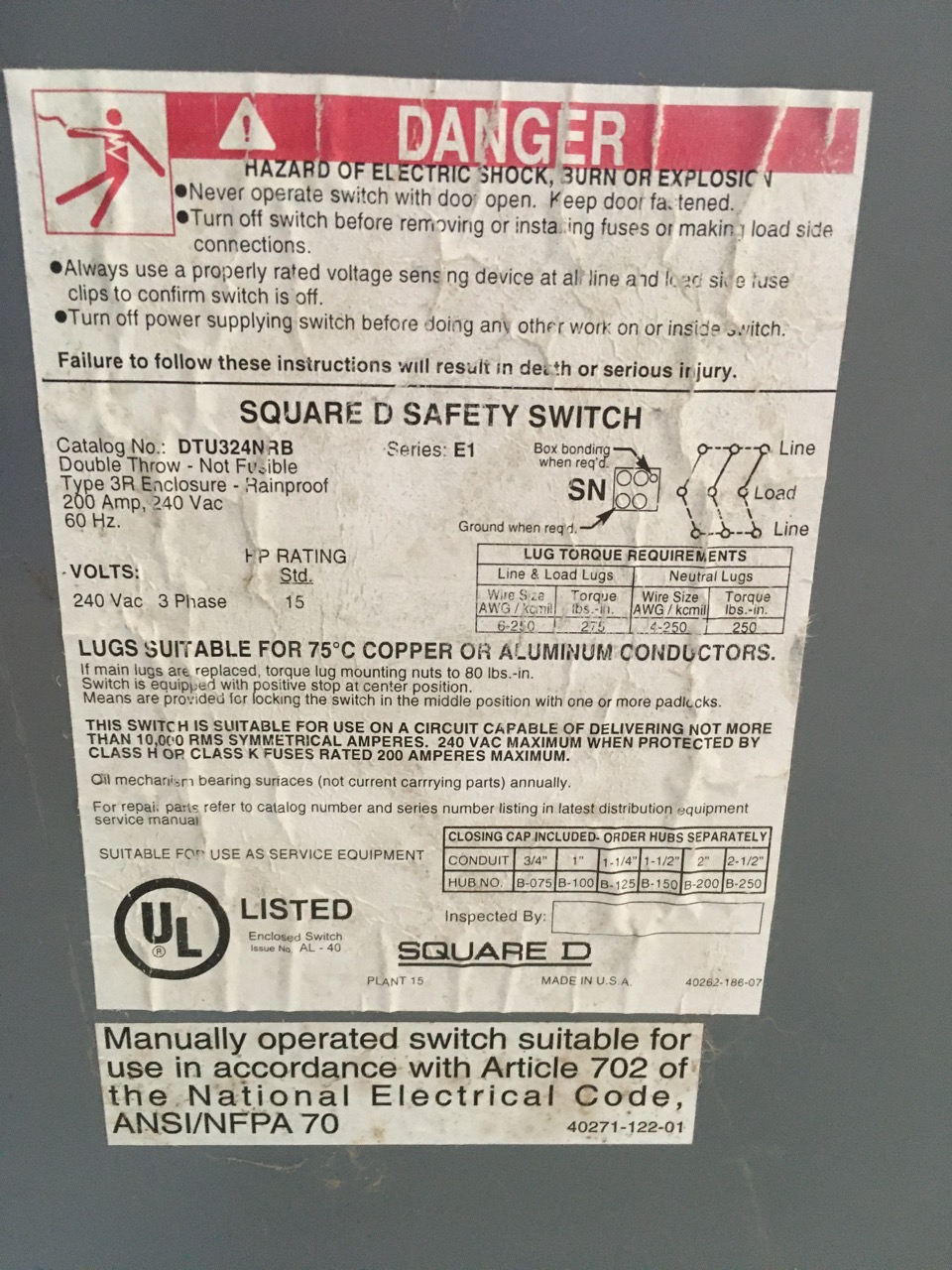 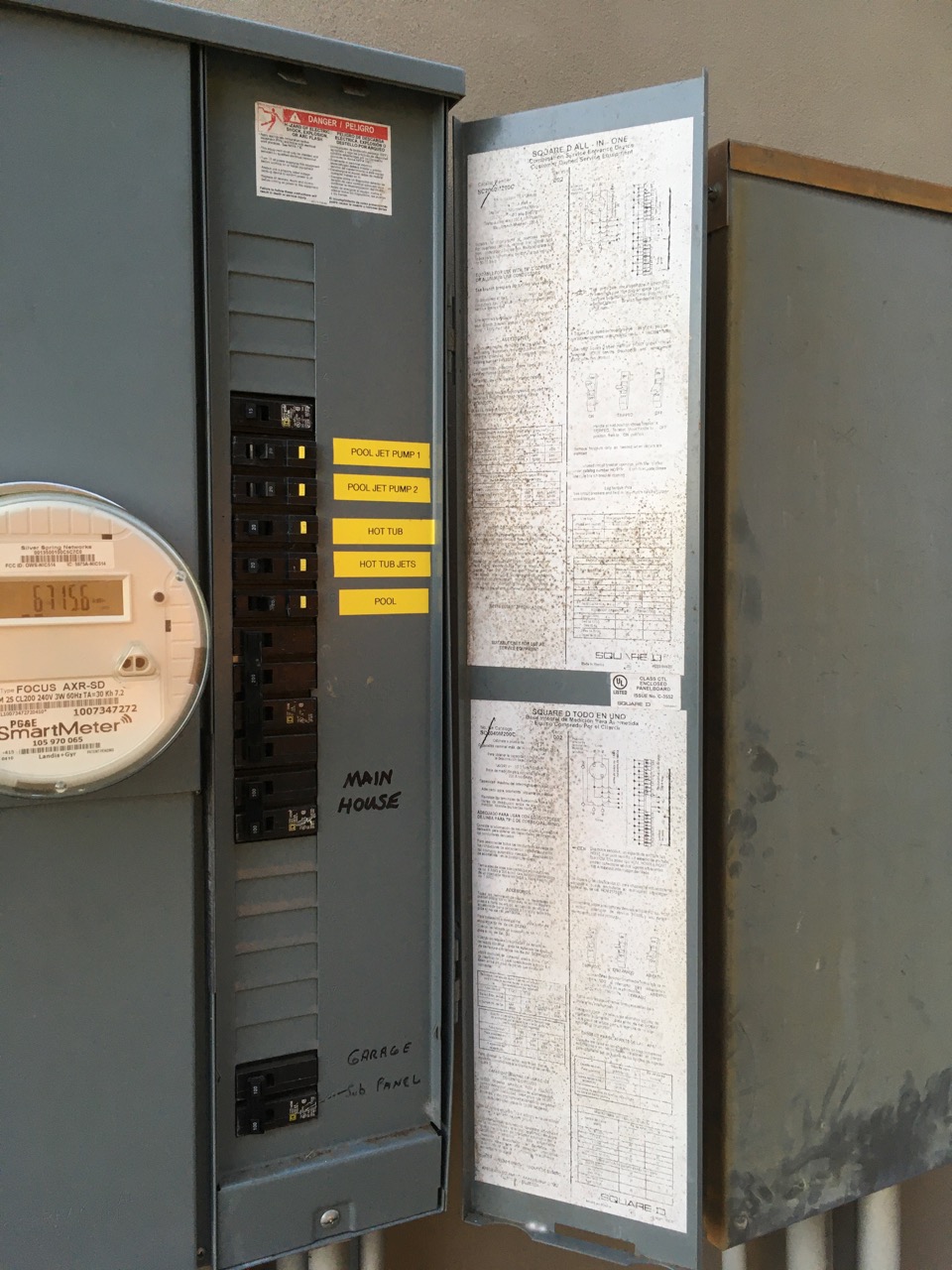 Often the stab rating of the circuit breaker mounting spaces are limited to less than the full rating of the busing, making it not possible to draw a single 200A circuit on the load side of the main breaker. I have seen combo meter panels that the meter feeds what is normal viewed as the load side of the main breaker and the stab connections feed the busing. Those panels usually have provisions for lugs at the top and bottom of the busing that could feed a transfer switch.

The conductors feeding both panels on the load side of the switch would need to be sized at 200A unless the length of wire satisfied one of the tap rules. An alternative might be to change the panel closest to the switch to a 200A, feed it with 200A wire and take a 100A load off it to feed the remaining 100A panel.

You can do this if the wiring from the transfer switch to each subpanel is rated for 200A. Because that wiring will then be protected by your 200A main breaker.

If the subpanels do not have 200A rated buses, then you will need a main breaker in the subpanel to protect the subpanel's buses.

However, all that seems a bit silly. What I would do is move the large loads - the ones you never expect to be able to power from a generator - to the main service panel so that they are utility-only. Then, have a 100A breaker in the main panel feed the transfer switch, which then feeds the two subpanels.

For now: put the transfer switch and both subpanels on the same breaker

For the time being, I would re-route the feeder to the new subpanel into the transfer switch, so that both subpanels run off the same 100A feeder breaker in the meter-main. Considering that your current meter-main cannot provide a 200A feeder to the transfer switch due to wire-bending issues, and that your house is lightly loaded (with merely a booster pump for large appliances, as all the major heating appliances run on propane and there's no air conditioner to worry about either), this provides the simplest solution for getting both panels on the transfer switch at this point in time.

I would run some 1AWG aluminum (2 hots and a neutral) through the existing nipple to jumper between the existing SER to the new addition and the transfer switch load connections. However, since there aren't any alternative lug kits available for your switch, and using lugs that aren't part of the switch's listing voids that listing, you'll have to use pigtails of 250kcmil aluminum wire from the existing lugs to some sort of splice that branches off to the two sets of load wires. I would use a UL listed (to UL 1953, category code QPQS) 3-pole power distribution block rated for 250kcmil line wires and 1AWG load wires for making this splice inside the switch enclosure; this block gets screwed to the back of the switch cabinet with ordinary sheet-metal screws, and provides a neat, stable point for making this connection at. (You should be able to find a suitable block at a local electrical supply house; if they ask for a part number, or you need to search online, the Mersen MPDB67013 works for this application and is relatively inexpensive/available.) Likewise, the cheapest/simplest way to make the splices between the jumpers and the SER in the breaker enclosure would be to use a similar splice block rated for 1AWG line and load wires (such as a Mersen MPDB63153); NEC 312.8(A) permits mounting power distribution blocks in switch and loadcenter cabinets, and the alternative (insulated mechanical splicing connectors) is both messier and more expensive.

For later: switch the service equipment out for something you can get 200A out of

The main downside to the former solution is that you're constrained to 100A to both panels; fixing this will require replacing the service equipment, due to the fact your existing equipment cannot supply any more than a 100A feeder to any one location, no matter how you try to slice or dice it. This is aggravated by the constraints your existing installation puts on the new service equipment:

This leads us to the Square-D SU816D200C; this meter-main complies with EUSERC specifications, with a single 200A main breaker feeding an 8-space, single-column loadcenter with feed-through lugs that allow the full 200A capacity of the service to be brought out to the transfer switch. However, it also provides a space for a 50A secondary disconnect tapped from the line-side of the 200A main breaker; this is fine for now, but can be problematic in the future due to a change in the upcoming 2020 NEC where the "rule of six" that permits such multiple-disconnect configurations is slated for removal, requiring all new service equipment to have a single main disconnect.

From there, we run 250kcmil aluminum from the subfeed lugs on the new meter-main to the transfer switch. If you wish to upgrade to a hardwired generator set (presumably propane powered) with an automatic transfer switch at this point, it would be an opportune time for such, or you could simply keep the existing setup and upgrade the generator later. From the load lugs on the transfer switch, we then run more 250kcmil aluminum in a 2" RMC nipple to the lugs on a HOM12L225PRB; the existing 1AWG feeders get connected via 1AWG jumpers run in the aforementioned nipple to HOM2100 breakers in this panel, along with matching LK100AN or LK125AN neutral lugs for the neutral bars in the new subpanel.

The conductors to the sub panels have to be sized for their upstream protection. You could, for example, drive a nail into them; downstream breakers won’t prevent a fire in that case.

If you don’t have space in the main panel for those breakers, you can put a sub panel right there to protect the run to the others.

Not the answer you're looking for? Browse other questions tagged subpanel generator or ask your own question.