Challenging wires in an outlet

We bought our house last year. It as built in 1974, and has a "low voltage" wiring system in it, that uses this kind of light switch: https://www.kyleswitchplates.com/sierra-despard-replacement-light-switches/

The house only had one owner before us, and he knew some engineers from Kodak, and they did some of the electrical work for him.

I have been replacing outlets around the house, since plugs were falling out of the old ones, and they have been consistently "half-hot", meaning there are 4 wires: white, black, red, and bare copper ground wire. I've been pulling the tabs off the right side of the new outlets and putting wires back in the same spots. This has been successful up until I got to one room. I pulled out the outlet, and it was a mess with pigtails that promptly "twanged" off and separated wires from their initial positions. There are the following wires in the box:

3 neutral wires (two of which have been clamped together with an third bit coming out, like an extension, and a third neutral wire)

The initial outlet was a back-stab type, as were all the rest, and have been replaced with screw-type. My first attempt at this was to use one of these: https://www.lowes.com/pd/IDEAL-In-Sure-100-Pack-Yellow-Push-In-Wire-Connectors/50101800

I figured, hey, all the black wires should probably go together, and then have one wire go from the hot connector to the outlet. Same thing with the neutral wires. So I rigged everything up, screwed the wires into the outlet, and went to the electrical box downstairs. Except when I turned the power on, the circuit breaker kicked off immediately. I've tried several combinations to try and get it to work, but it either trips the breaker, or there is no power going to any of the outlets in the room(s) on that circuit.

If I switch the light, I can hear the sound of the current (normal for all of this kind of switch, from what I've been told by multiple professionals) but still no power. I've included photos below. Most of the other outlets in the room have pigtailed wires in them, but they have stayed put and remained connected thus far.

It has also been suggested to me that the outlet is being used as some kind of junction point for the room next to the one I am replacing outlets in, which makes sense because it's on the same circuit and nothing works in that room either since this outlet got messed up. Any suggestions would be welcomed. I've included a couple of images of the offending outlet for reference. 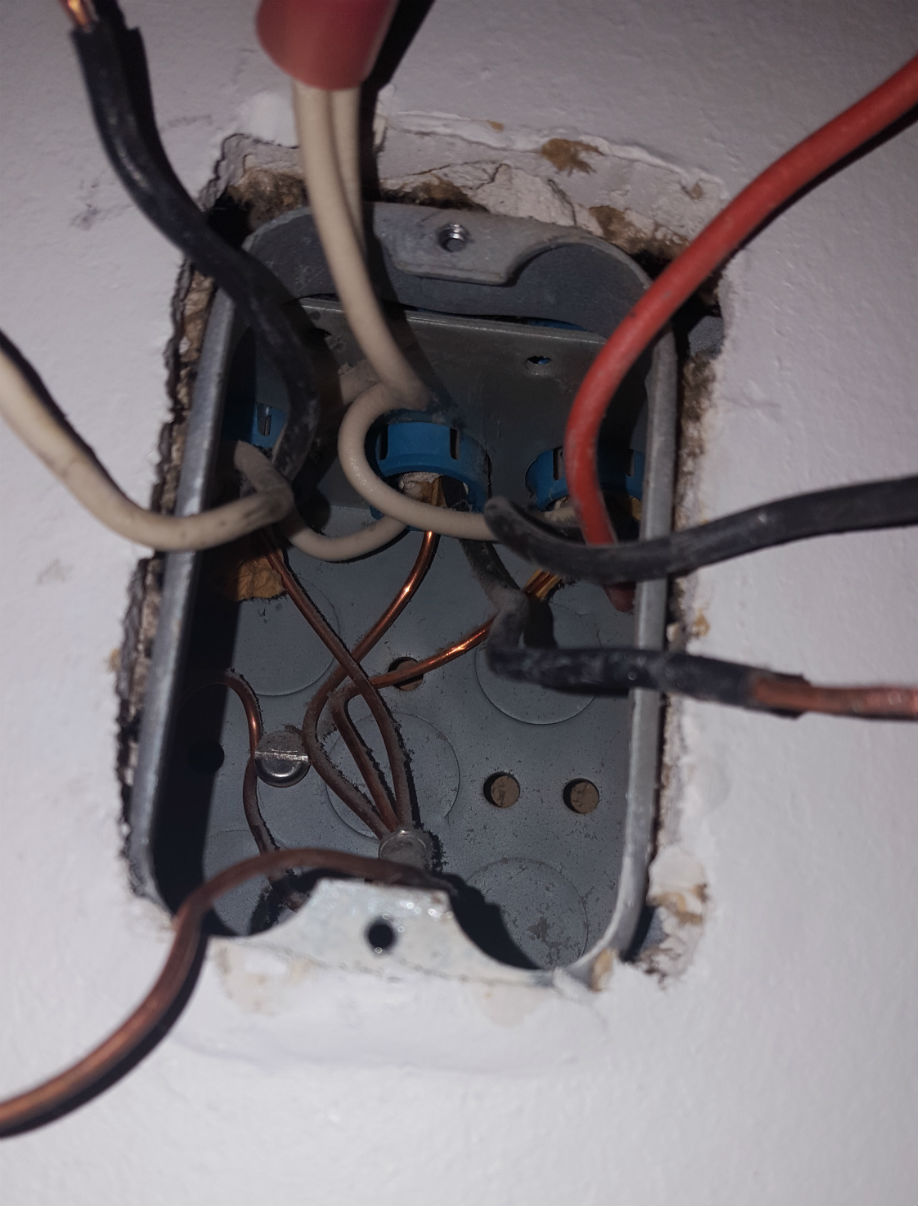 You don't want all the black wires connected together if this is a switch. You want the hot, black wire on one side of the switch...and the wires that lead to the stuff it is switching on, on the other.

A 4th wire (red in this case) is often used in 3way circuits (like where lights can be activated from either top/bottom of stairs). Look up 3 way circuits on YouTube.

1
Six wires in outlet box, from 3 different circuits; 4 are hot?
2
24v from a double circuit outlet
0
Added sconces to switched outlet run and made the outlets always hot, what do I do with the last outlet?
3
outlet not working but grounding screw is hot
0
Outlet Change with 4 Hot Wires
1
Outlet tester results for open ground on mixed circuit
7
Outlet with 3 sets of wires
1
Strange voltages from wires behind outlet, and smell from behind outlet