Concerned about 3 circuits interconnected in 1 box

My home was built in 1941. The wiring is a mix of original and some added updates. I recently went to wire in a bath exhaust fan and timer switch on the same circuit as the light-switch (they share a box now) I traced the circuit (14) to a nearby box with a ceramic light also on circuit 14.

This small octagonal box had 8 cables coming out of it. Using a voltage tester I determined circuits 10 and 12 also ran through this box. With all 3 circuits turned off I proceeded to separate circuits 10 and 12 into different junction boxes to free up room to tap off 14 for power - and I prefer not to have multiple circuits in the same box for reasons I am about to come to.

The voltage tester indicated voltage was not present, but when I disconnected a group of white wires I saw sparking and lights I know to be on circuit 8 went flickered and went out. I turned off circuit 8 (that's now four breakers off to cut power to this one junction box with light).

After separating all the wires for 8, 10, and 12 (14 was wired to itself and not interconnected like the other 3) I turned the circuits back on and found that both the black and white wires from circuit 8 were 'hot'. There are 3 sets of 3 and 4-way controlled lights on 8, but no switch position checked had any effect on either black or white, they always stayed hot.

This wiring has been this way for at minimum 22 years (my father may have added some of these wires between 1985 when they purchased the home, and 1997 when he passed, or the previous owners may have done this) Either way, in 22+ years it has been working, but I haven't a clue as to why it would have been done this way, nor if it's to code.

10 come from the panel to the box (what i thought was down-line circuit 10 is actually fed from a junction box on 8), 12 also comes from the panel, but has two cables feeding down-line.

Attached is a diagram showing the connections that concern me black of 10 to black of 8, white of 10 to white of 12 (not from panel), all 3 blacks of 12 are connected together, and the 'Hot' white from 8 is connected to the white on 12 coming from the panel as well as the white on the other 12 that runs down-line. 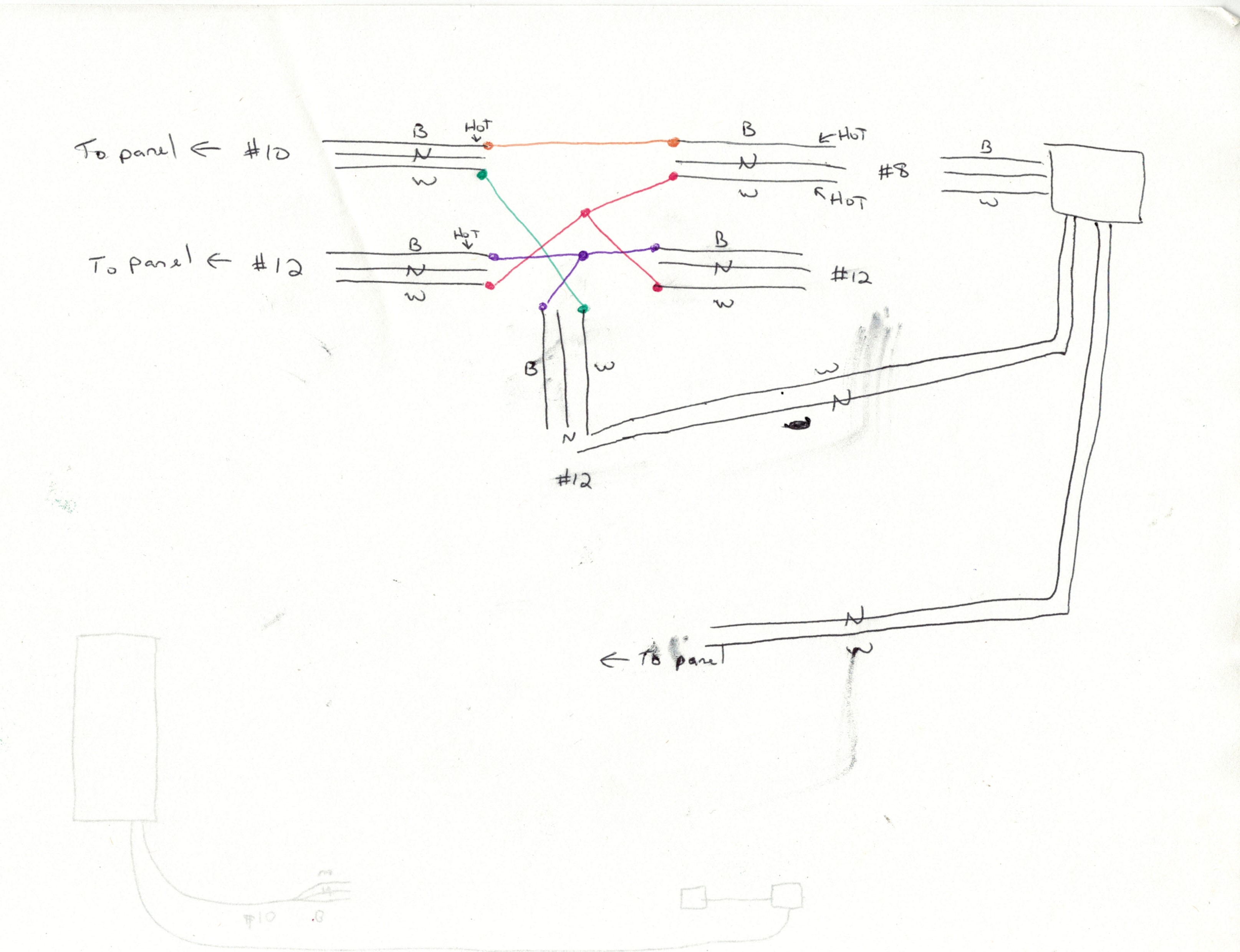 You're not supposed to disconnect wires with the power on. However, this can be a real problem in a promiscuous-neutral situation, where you don't realize another circuit is borrowing this circuit's neutral, thus putting current on it. It won't even show up with a voltage tester until you disconnect the neutral, and then whammo.

Don't let your guard down around neutral (or any other wire that's "supposed" to be safe); this is a good example of why.

Current flows in loops. That's why everything has at least 2 wires. Current is flowing out the hot wire, to the appliances, then returning on the neutral wire. If you disconnect neutral, it'll spark because you are interrupting current.

Further, the disconnected side of the neutral will measure out as "hot", because electricity is trying to flow from hot via the appliance back to neutral, but it can't get back. It's normal in this case to read mains voltage across the neutral gap. (in fact, this "lighting up" of neutral is a huge reason ground is separate!)

Your box's current wiring has neutrals sleeping with everybody. That's quick and lazy wiring, but it's very bad. Imagine you run three 20A circuits, that just happened to return all their current on the same neutral. That neutral will flow how much power? Anyone, anyone, Bueller? 60 amps, that is correct. Neutral wires don't have circuit breakers, so that's a huge problem. The neutral will set the house on fire and the breaker will never know.

There are ways to exploit split-phase or 3-phase geometry to intentionally share neutral wires (so that neutral handles only differential current), but you don't appear to be doing it here.

Currents must be equal in every cable or conduit

This is another rule that outlaws the promiscuous neutral. AC power kicks a heck of an electromagnetic field (EMF). When two adjacent wires have opposite flow, their EMFs cancel each other out. That's vital for safety - EMF causes eddy current heating, which starts fires, and vibration (which cracks copper and causes arc fires).

Imagine many ants running up and down branches of a tree. They never leap from branch to branch; they'll come down branch 1 and go up branch 2 rather than jumping. At the end of the day all ants go home. If you put ant turnstiles anywhere on the tree, you'd have exactly the same number of ants going out as coming back. Mains electrical is like that -- if you wire all your cables in tree/branch topology with each branch being 1 cable, currents will inherently be equal in all cables.

See how current is not equal in that 10-8-12 sequence. Current goes out the orange hot, but comes back on the red neutral via a different cable.

So pick and choose. For instance have green neutral go straight across to that cable orange hot serves. Then have red neutral serve the same cables that purple hot serves. This is mandatory and you should do it immediately.

When you have two disparate circuits in the same box, it's preferred to partition them. Or at least mark them with colored tape -- white and gray are allowable colors for neutral.

This may not solve all your problems, but at least this will be correct.

And to review: Hook up wires in order, and push them into the back of the box in order:

Update, the problem has been resolved. I (at my wife's suggestion) took stock and mapped out all the switches and receptacles in the house and labeled which circuits they were on (which revealed a few other minor issues which are being corrected) This also allowed me to better trace the cables that feed the circuits in question.

As it turned out, there was a 3-wire cable with the neutral removed (black and ground only) supplying power to circuit 8. To remedy this, they pulled the black out of another 3 wire cable (white and ground only) and ran it over to a junction box on circuit 12 which led back to the original box I was concerned about (so far this is what my original diagram showed - though slightly mislabeled). Circuit 8 also had some wires running through conduit along with wires from circuit 10 and then split off two junction boxes later. The black was solid all the way through, but the neutral was joined together with the neutrals from 10 at this second junction box. I’m guessing this was original to the 1941 construction as they were twisted neatly and soldered together then wrapped with cloth tape.

To remedy this, I separated the two neutrals from 8 from the 3 neutrals from 10. Then I ran a new 12/2 with ground from the panel to circuit 8 to replace the black and ground wire. I ran a new cable from the panel to 10 as well as long as I was in there and eliminated the junction and cross wiring in the original junction box altogether. After that I removed the Neutral and ground wire from 8 to 12 to get all 3 circuits completely separated.

I did have an electrician come out to verify my plan before proceeding, he said I was on the right track, but he’s the one that found where 8 and 10 were tied together (I had thought it was in a different spot). They were running a special, so it only cost me $100 to have him out, but saved me some time, and the reassurance was worth it in my opinion. Thanks all for the advice.

8
Can two circuits' neutrals be tied together (not a single neutral wire, but two that have been connected)?
2
In a gangbox with switches on two different circuits, how can I identify which neutrals are associated with which circuit?
0
Why does my switch trip the breaker after light fixture replacement?
2
Questions about re-purposing double gang electrical box with two circuits
0
Question about a bathroom wiring I do not understand
0
Replacing GFCI and found two hot wires
1
Wiring a receptacle from a ceiling box in a basement
0
Three Way Switch Weirdness
0
Hot Neutral Wires after breaker off
4
Wiring advice - two circuits wired to a single GFCI outlet