I have a 1000W GE "over the range" microwave (model JVM3160RF) that is now about 3 years old. Earlier this year, one of the interlock micro-switches failed (would not depress) which caused the breaker circuit to pop. First only if you opened the door while cooking, then eventually as soon as the cook cycle was started.

So, I replaced the failed switch. Then the circuit started blowing again maybe a month or two later. We tried to always remember to "Stop/Cancel" rather than pull the door open in the middle of a cook cycle. But the switch failed again. I'm on I think the third or fourth failure now, the last of which has occurred within a week of replacing the switch. 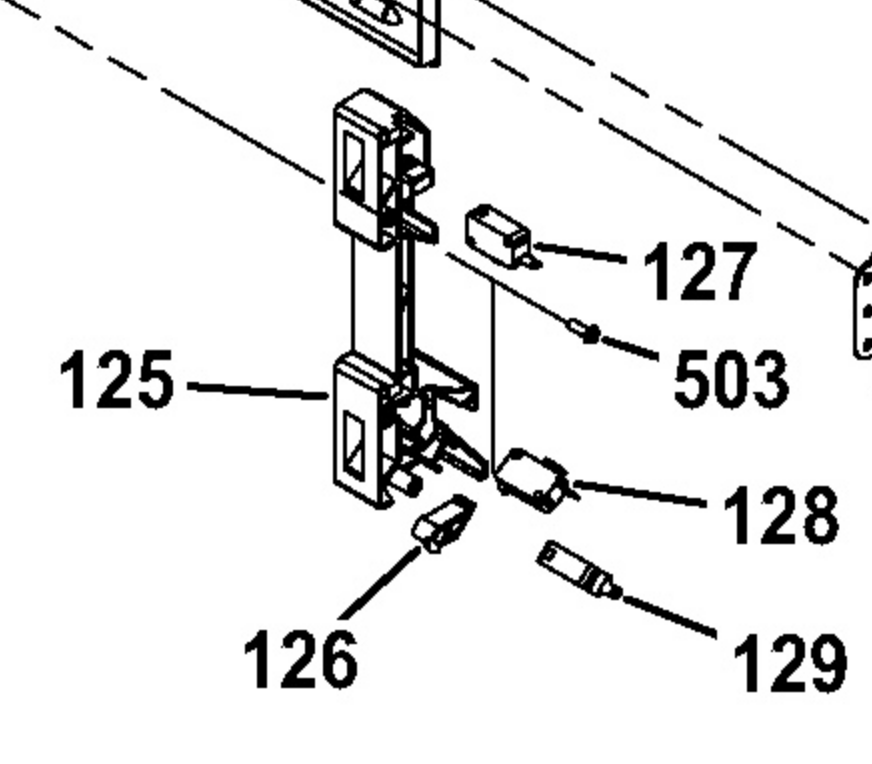 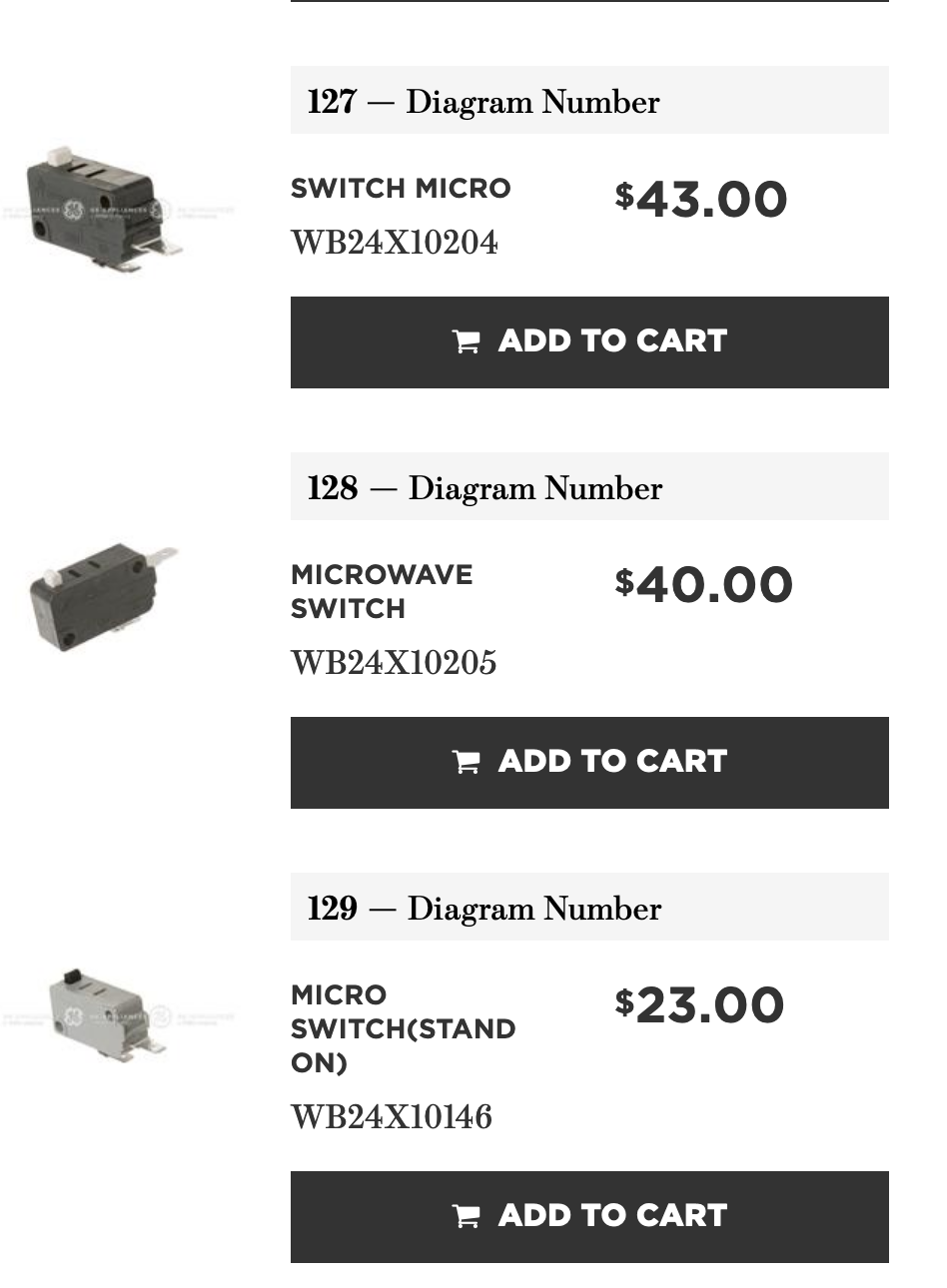 Now here's something that perplexes me: in the GE Parts catalog items 127 and 129 are both "normally open" switches. They look identical but have different part numbers. If you look at the zoomed in photo on each part's catalog page, they are both "K3WA" type that can easily be found on Amazon.

If I remember correctly, in at least 2 or 3 instances, the 128 part (middle, normally closed) switch has failed. And one time the bottom 129 NO switch has failed. Which switch ultimately fails may be irrelevant. As Michael K pointed out, they are probably failing due to the high current burning them out. The real question is why is the interlock shorting instead of simply stopping the cook cycle (the normal everyday behavior you expect when you open the door to stop the micro and get your hot food.)

Some posts have mentioned ability to adjust the position of the switch assembly. As far as I can tell, there's no adjustment between the plastic frame and the chassis, nor in the individual switch positioning.

I've also looked for warped or deformed plastic which would allow something to be out of place. Have not found anything suspicious there.

At this point I'm about ready to replace the microwave, although I am certain it should be fixable. The worst part is we will have to tear out at least some cabinet trim in order to remove and replace the microwave which makes it an enormous hassle. What can I do before I tear this microwave off the wall??

So I noticed on part 125 the latchboard the latch "ramps" appeared to have worn down a bit which might cause the switches to not all flip in the appropriate sequence. So I purchased and installed a replacement.

I did this mid-November and thus far we've had no more blown fuses. So fingers crossed! I will edit this answer if the problem reappears.

As said in a reply I made to one of those earlier questions that you linked some microwaves have the switches arranged so that they will short across the mains input voltage through the fuse if they do not sequence properly. This scheme allows a lot of current to flow through the switch contacts for those that perform the shorting function till the fuse blows. If the switches sequence correctly none of this current will flow.

It is possible that in your case this switch sequencing is not so serious that it pops the fuse and instead just runs a current spike transient through the switch. Repeated application of this transient degrades the switch contacts and/or over stresses the internal switch parts and makes the switch fail.

You should also heed the suggestions of those other answers and comments as to where you purchase your microwave switches. $30-50 for a switch like that is microwave robbery.

I removed the latch and put a dab of epoxy on the worn "lip" of the latch where it had clearly warn, upper and lower. The worn areas are easy to see if you remove the latch assembly, which only requires removing two screws and a little wiggling. I used a file on the epoxy after it had set up. It's been two months now and it works fine, although we are pretty gentle opening and closing the door.

Most microwave ovens have a physical interlock preventing opening the door while cooking (i.e. while the magnetron is running). This is to prevent injury to people, since being irradiated with ~1,000 watts of microwave energy is not good for your health. With the door closed, the oven should radiate no more than 5 mW, but with it open you'd get about 200,0000 times as much energy. In addition, opening a microwave with superheated liquids could cause serious burns. A microwave oven I used to re-boil water blew the door open in a steam explosion, but I was shielded by the door.

Something is wrong with the latch mechanism if you can open the door while the oven is running. As Michael Karas states, the switches act as crowbars to intentionally blow fuses if the door were to be forced open. After that steam explosion, I had to replace the ovens fuse, but it easily could also have destroyed the crowbar switch.

Fix the interlock solenoid that latches the oven door, or get a new microwave oven.

5
How does a microwave door interlock work and is a DIY repair feasible?
2
Microwave micro switches
1
Microwave oven blows internal fuse when door is closed

7
How to repair a microwave door with a broken spot weld
2
Microwave door switch comparison
2
Microwave Door Twisted
1
Why is my dryer turning off mid-cycle and staying off for 30-60 minutes?
2
Do I need both contacts to open/close on a centrifugal switch?
5
Ideas for rigging a light switch to a double bifold door?
11
What would cause a microwave oven to trip the breaker when I open the door during heating?