What are the RAL colors of “de Stijl”?

What are the (best matching) RAL codes of "de Stijl" many people know from Mondriaan? 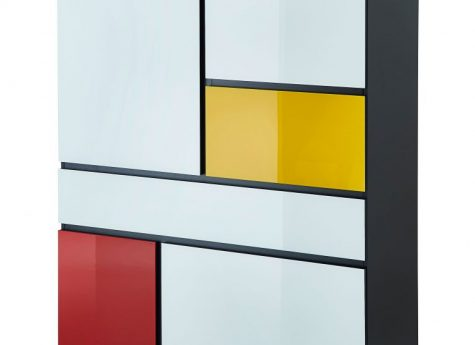 Don't count on it

RAL has a very, very small color space. Further, RAL is not an "analog" system - there's no way to pick RAL 1049.33185 if you need a shade in between. So forget it; no RAL color will match Mondriaan's choice, unless he picked from RAL in the first place.*

The eye can distinguish millions of colors; a thousand in the color space isn't nearly enough.

Honestly, RAL is just another Pantone. A system entirely intended to be trendy, and be used for new designs, and never intended to be a tool for historical matching. Of course they want you to believe that all past colors should be defined in terms of their system, and sadly, they sometimes succeed. However, your interest is as an historian means RAL and Pantone swatch books are ideal for leveling tables.

A critical limitation of Pantone is that it is defined in terms of ink ratios of Pantone inks; whose mixes are proprietary. In fact Pantone is trying to deprecate many of the something like 26 inks a Pantone printer must stock, so many original colors are being obsoleted. Yeah, that's just what we want in a color system.

For a proper match, you need an absolute color space such as CIE or Munsell. Munsell is an odd hybrid, it's a private company who makes a swatch book, but Munsell numbers are derived from absolute physical characteristics; for instance 7.5 BG 8/4 describes 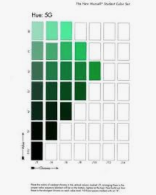 Munsell makes a swatch book with 40 hues x 8 lightnesses x 2-10 even numbered saturations. These are numbered linearly and are designed to be interpolated. So you can nail down a Munsell number for any reflectable color, like 8.1 BG 7.16/3.34.

One difference, CIE to Munsell, is that the Munsell company survives (part of XRite, who owns Pantone). They stock sheets of each standard swatch-book color. For fractional colors, they will formulate you you custom sheets for about $300. I'm sure in 1953 those custom sheets were loaded with chromium and lead; today they're organic. No dependency on ink formulas here!

There are also mail-order paint shops that collect color books, including Munsell and whatever books may exist for CIE, and will cheerfully mix you a sampler latex paint tin of any color out of that book for a few dollars. You can then thoroughly paint a piece of wood (3-4 coats to be sure of no print through) and take that to your local paint shop. They can then scan it and match up.

Don't even try to match off screens

Reflective/paint colorspace works so violently differently from additive/video display colorspace, that there simply is no comparing. I've tried to use digital photos and Photoshop to interpolate between two Munsell chips (i.e. reddish chip - exemplar - purplish chip) -- it totally does not work at all. It's as if the computer cannot even see the color; like it's seeing something else and it's just wrong. Anything you do to color-match via the computer, e.g. dropping a Jpeg of the art into Photoshop, will wildly mislead you. Don't even bother trying.

I would talk to the gallery. At some point in the history of time, I am sure somebody stuck a color scanner on Mondriaan's painting and lifted off the CIE or Munsell numbers.

* Which has happened. I was doing some industrial archaeology and was resolving Munsell colors, expecting a fraction and a $300 "send off to Munsell for custom sheets" sort of deal. I found the number not only to be an integer, but actually in the standard swatch book - dead nuts. Then I checked another. Again integer; again in the swatch book. It was perfectly clear the company had specced their colors out the Munsell book. That meant all the usual "wobble" from aged or sun-bleached pigment samples, ambient light color, you name it, just went away. It was ridiculously easy.

Not the answer you're looking for? Browse other questions tagged paint or ask your own question.