I might be buying an electric car soon and i was wondering if I could use my current nema 10-50 dryer plug for my 240v evse? The plug is not used since I have a gas dryer.

The receptacle was installed by the previous owners, it was run through 1/2 inch emt conduit from the main panel to the dryer (roughly 25 feet total run). I read nema 10-50 is supposed to have hot-hot-neutral, but it looks like this has hot-hot-ground since there is a red, black, and green wire (also verified at the main panel).

Can i safely convert this to a nema 6-50 receptacle since i've read nema 6-50 should be hot-hot-neutral anyways? The current circuit has a 30amp breaker with 10 awg cable for the two conductor wires and 12 awg for the neutral (green) wire. Is this wire gauge safe/code for 30 amps? Should the ground cable also have been 10 awg vs 12 awg? The evse is only 16 amps but i'd want to know the plug is safe for 30amps. Sorry for the long post and thanks in advance! 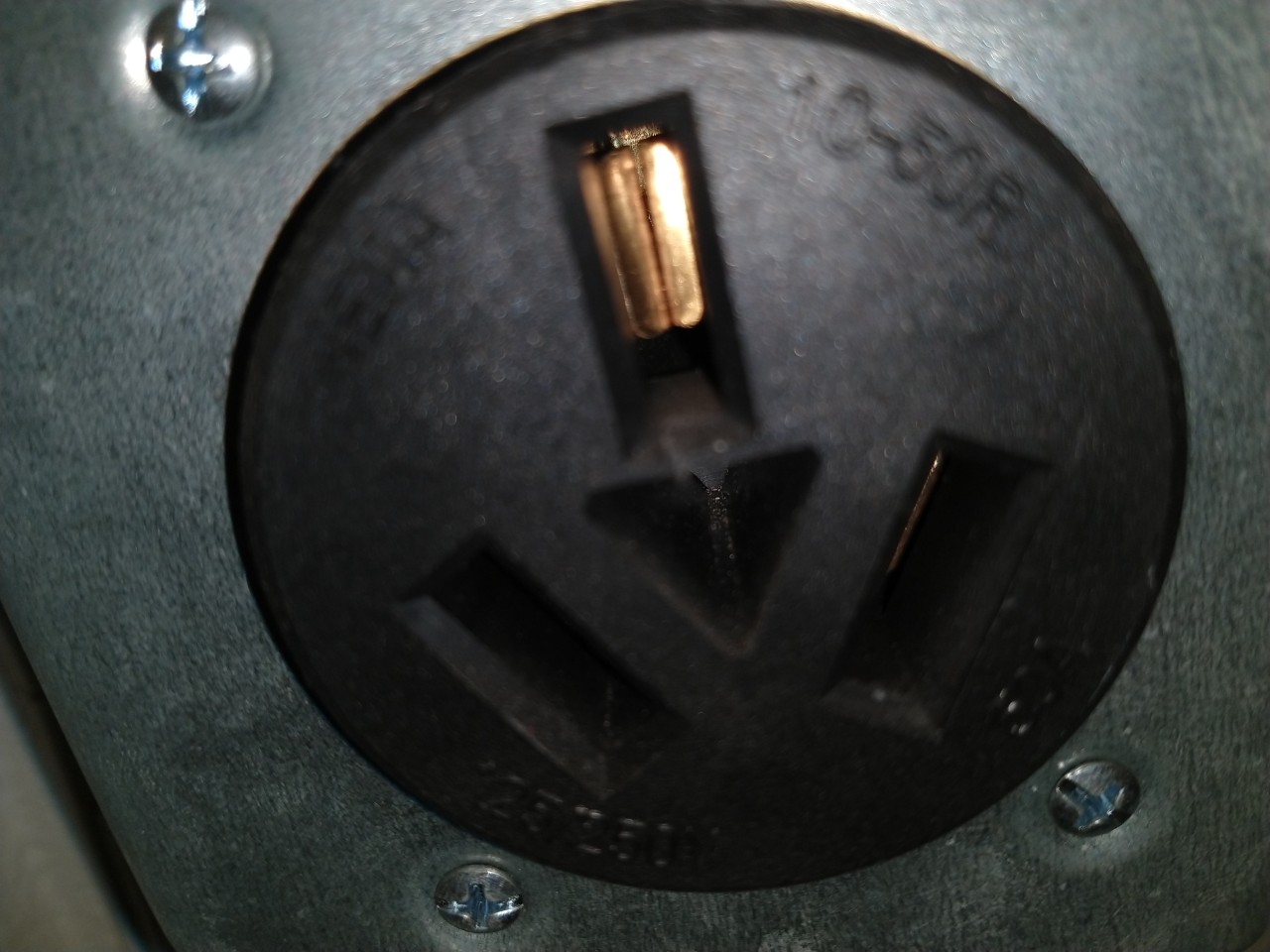 That socket is wrong, and was wrong at the time of installation. The person probably had a leftover socket lying around and went "whatever". I myself had a NEMA 10-50 in my stocks; I threw it in the trash rather than risk someone installing it.

You cannot ever use NEMA 10 except to repair a broken outlet in dryer or range circuits which predate 1989. Anytime you see a grounded with neutral location with NEMA 10, it was installed NEMA 14 and foolishly rolled back to NEMA 10 socket because an appliance arrived with a NEMA 10 plug. The proper procedure is to change the plug to NEMA 14.

Your all-metal EMT pipe has two #10 hot wires, a perfectly acceptable ground (The pipe itself) and a useless dunsel of a ground in the #12 green wire. Fortunately, redundant grounds are not illegal, so you can just ground it to the box and the panel and forget about it. Can't hurt, might help.

Your wiring can support any of the following connectors: NEMA. 6-15, NEMA 6-20, and NEMA 6-30, however you must change the breaker to the corresponding amperage. (Due to a special exception a 20A breaker is allowed on a dual NEMA 6-15 socket; however it's illegal to put a 6-15 plug on a 16A charger.)

Your charger, at 16A, is right on the line between needing a 20A plug or a 30A plug. Consult the instructions. Set your socket and breaker to match.

You could connect a NEMA 6-30 (not a 6-50) to the #10 hot conductors, but the Equipment Grounding Conductor needs to be minimum #10 also. If the conduit is intact and not connected to a co-centric knockout then it may satisfy the ECG, but it would be better to use the #12 as a pull wire to pull in a #10. The receptacle ground will need to be pigtailed to the box, the cover screws do not satisfy the requirement.

Also note installation of new NEMA 10 circuits has not been code compliant for more than 20 years, and that NEMA XX-50 receptacles require 40 or 50 amp circuit.

You should not need to modify the existing connector. If your car's manufacturer does not have an adapter to fit your charging cable to the existing NEMA 6-50, look around Amazon and/or electric car supply websites.

I own a Tesla and was able to find any number of plug-converters compatible with the Tesla cable.

Not the answer you're looking for? Browse other questions tagged electrical electrical-panel grounding or ask your own question.