How do I fix this toilet flange?

Basically there is a PVC flange that was glued to the inside of the pipe. The problem was that the metal flange that was on the outside was so completely bent that the bolts no longer stayed inside. So I wanted to remove the metal flange and replace it with a new one, but I didn't know the PVC was glued in and long story short wound up breaking it. What is the correct way to fix this? I have replaced several toilets before but never had this problem before.

Picture of toilet flange now (note - that metal ring is the NEW one): 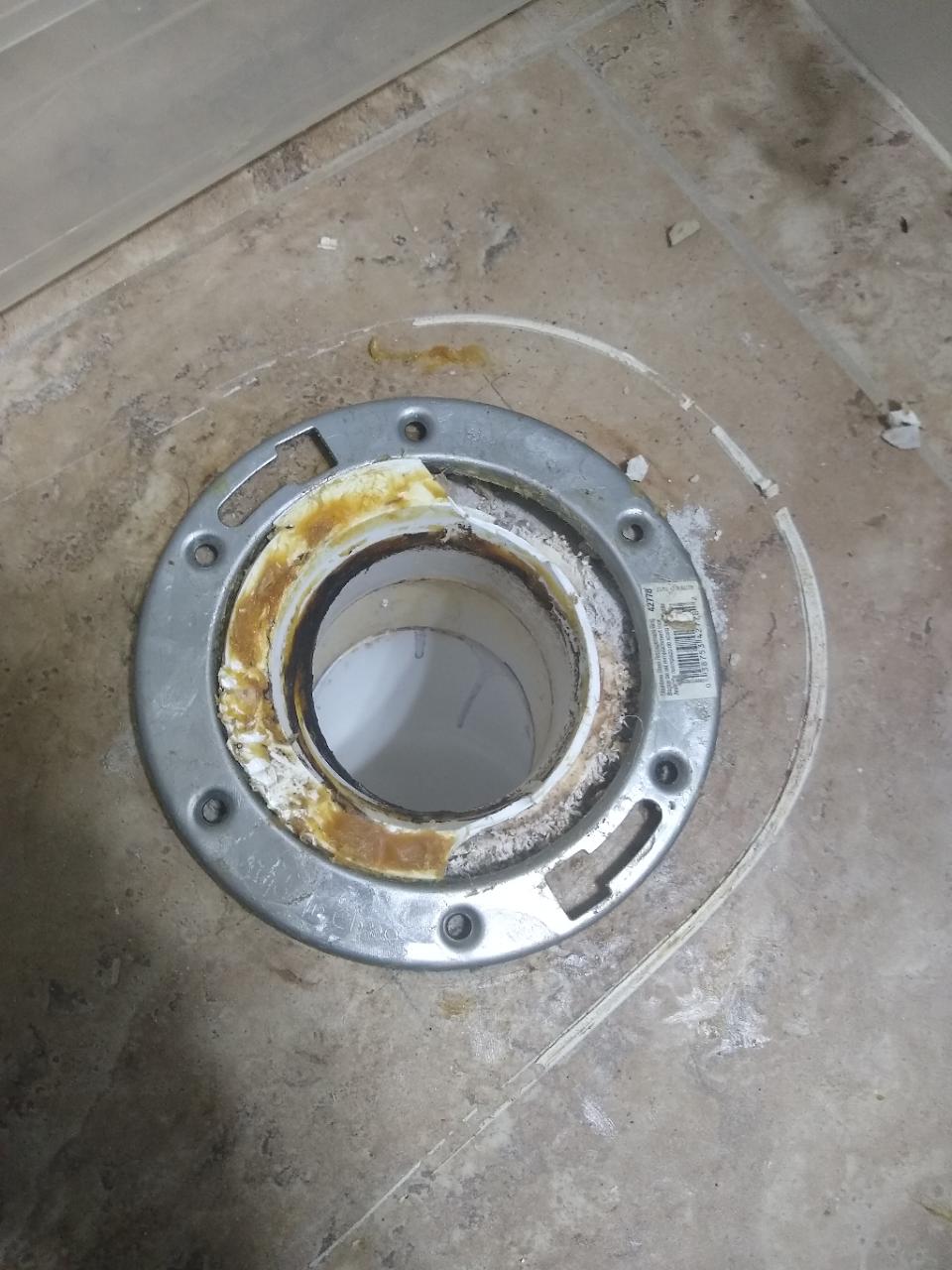 Will a wax ring like this just go over it and seal the hole? Or do I need some kind of gasket? Something more? 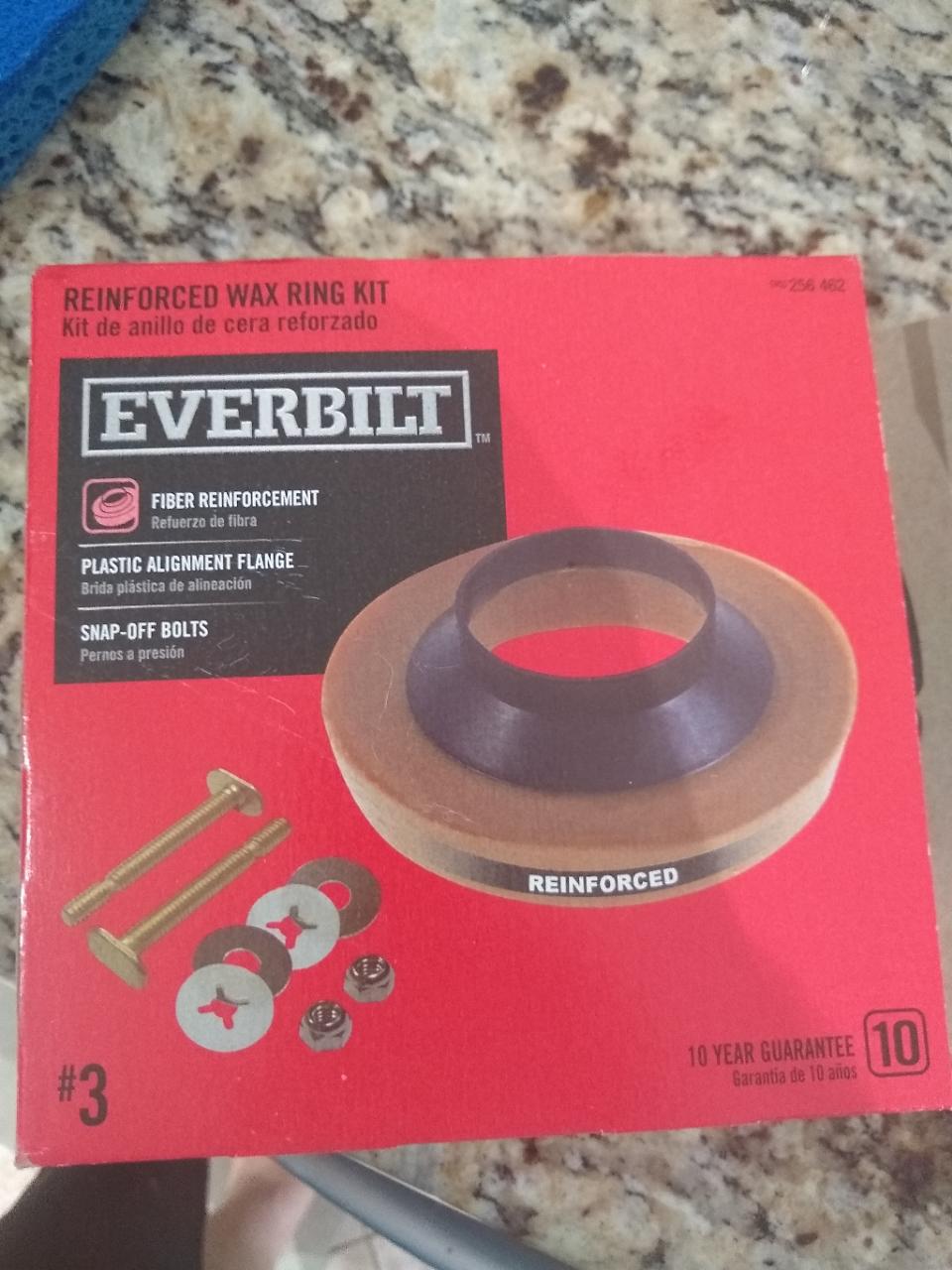 The metal ring (in fact the whole flange unit) looks like it was perfectly fine... until you got to it. The exception is that it does not appear to have been screwed to the floor, which is necessary for stability.

I think your problem of "the bolts no longer stayed inside" may have had to do with misunderstanding how closet bolts attach, rather than a damaged ring.

It will be very difficult, at this point to remove the remains. I strongly recommend that you screw the ring directly to the floor, as it should have been originally, and go ahead and install the toilet using that wax ring you have. Make sure you understand how to properly use those bolts to attach the toilet.

If the floor beneath is ceramic tile on concrete you would need to drill into it and use appropriate anchors for the screws (I would use lead anchors and stainless-steel screws). If it is vinyl tile (or ceramic tile on plywood or backer-board) you could drill through it to the wood subfloor and screw into that.

If I were doing it, I would buy an extra wax ring and pack wax into the voids between the plastic flange body and your new ring (warm the wax in the sun or with a hair dryer).

Since the PVC flange is glued to the inside of the pipe I'd try to remove it. Cut some slits into the flange pipe the depth of the pipe and about a half inch apart with a hacksaw blade and try to break out the pieces. Shove a rag down the pipe to prevent the pieces from going down the drain. Then you could just install a whole new flange that would make for a great seal with the wax ring.

I see the original poster resolved his issue, but no one mentioned how this repair should happened.

It’s common for the steel ring in the toilet flange to be damaged by rust. The minimally invasive repair is to removed just the steel ring and replace it with a split repair flange made for this purpose. Obviously you’ll need one that can fit the PVC portion left, but at least in the US, there are dominant brands where they’re similar.

Often, the original is rusted enough to be easily removed. Sometimes it’s rusted a lot but needs to be carefully cut away. A dremel tool with a cutoff blade works well here.

Then you clean out the grooves in the pvc for the new ring, and attach the two pieces around the pvc, securing with the new closet bolts. (Note that on each side of the flange you end up with one nut holding the flange ring together, under the toilet, and another on top, holding the toilet itself.)

And just as was done with the one piece ring above, you screw through it into the subfloor before mounting the toilet.

0
What do I do about re-seating this old flange?