How to increase light from a vanity cabinet?

I need to seriously increase the amount of light from a bathroom vanity cabinet. The picture below is a little blurry because I didn't have a tripod handy, and it took a 1/10 second exposure to take a picture of a powered-on light bulb: 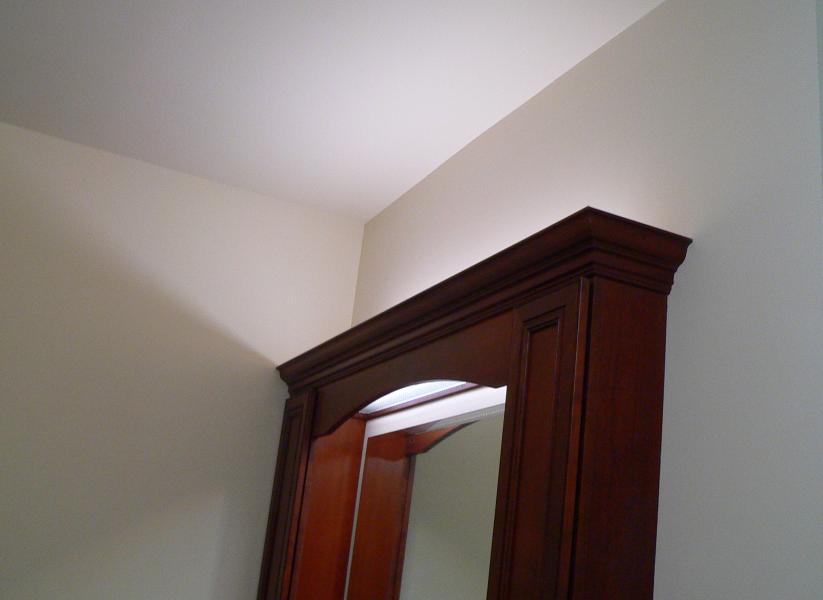 The light is produced by a simple strip fluorescent tube fixture mounted to the wall behind the top of the cabinet. It was originally a 36" fixture centered over the open area in the middle with the mirror. I replaced it with a 48" fixture. Downward light from most of the extra length is blocked by the side cabinets, but it adds some light toward the ceiling.

I could line the top front of the cabinet with aluminum foil to reflect the wasted light, but that won't come close to what's needed. A double-tube fixture would double the light output, but would be wider, so the top of the fixture and upper bulb would be visible over the top of the cabinet. That also wouldn't add a lot of downward light.

I contemplated cobbling together two single fixtures, each with an LED fluorescent-replacement bulb. They're very directional, so it would require one facing down to light the sink area, and one facing up or diagonally up for the ceiling. That will take a little engineering to deal with mounting brackets, the ability to replace the bulbs if needed, etc.

There's a second, matching vanity and cabinet on the same wall, so I will need to duplicate the solution there. I also hope to avoid a "remodeling" effort, installing different fixtures in other locations.

Before inventing a new light fixture, I was hoping people here might have a better idea on how to get seriously more light in this area.

Cram more tubes in there. Don't use T12 tubes, they are too bulky. You can get four T8 tubes in that space if you really cram them tight. Better still, use T5 tubes, which are almost half the size of T8. All are equally bright to the old T12.

48" (45-something for T5) is a good length as this will be the most common tube and ballast.

You need ballasts matched to the length and T-code (which is the diameter in eighths of an inch).

Using low voltage LED strips, you can out an essentially unlimited amount of light in there - just a case of how much 12/24V power you want to supply. The low voltage LED strips are cheap Chinese but they are unlikely to give any trouble. Use a UL listed power supply such as a GE or Meanwell.

Have you thought about some trac lighting with a few led flood lights angled slightly away from the wall and a couple led spots directly downward?

4
How can I convert my under cabinet lighting from halogen to LED?
3
How do I deal with a loose lightbulb socket on our ceiling fan?
1
How can I add a ceiling light fixture to my apartment?
1
Light fixture emits a high pitch sound with no bulb
0
Will many weak bulbs be more luminous than one bright one?
2
Do fluorescent fixtures rated for "Through Wiring" exist?
1
How directional is LED strip lighting (with a diffuser)?