Insulation from electric meter to panel is rotting

The electric line in from my meter to my panel is rotting, or rather the insulation is. See this picture (below). Is there some product I can purchase to temporarily wrap it until I can get it completely replaced by an actual electrician? I thought I had found a 3M product, Scotch cable jacket repair. But not sure if that applies.

Any advice is appreciated. 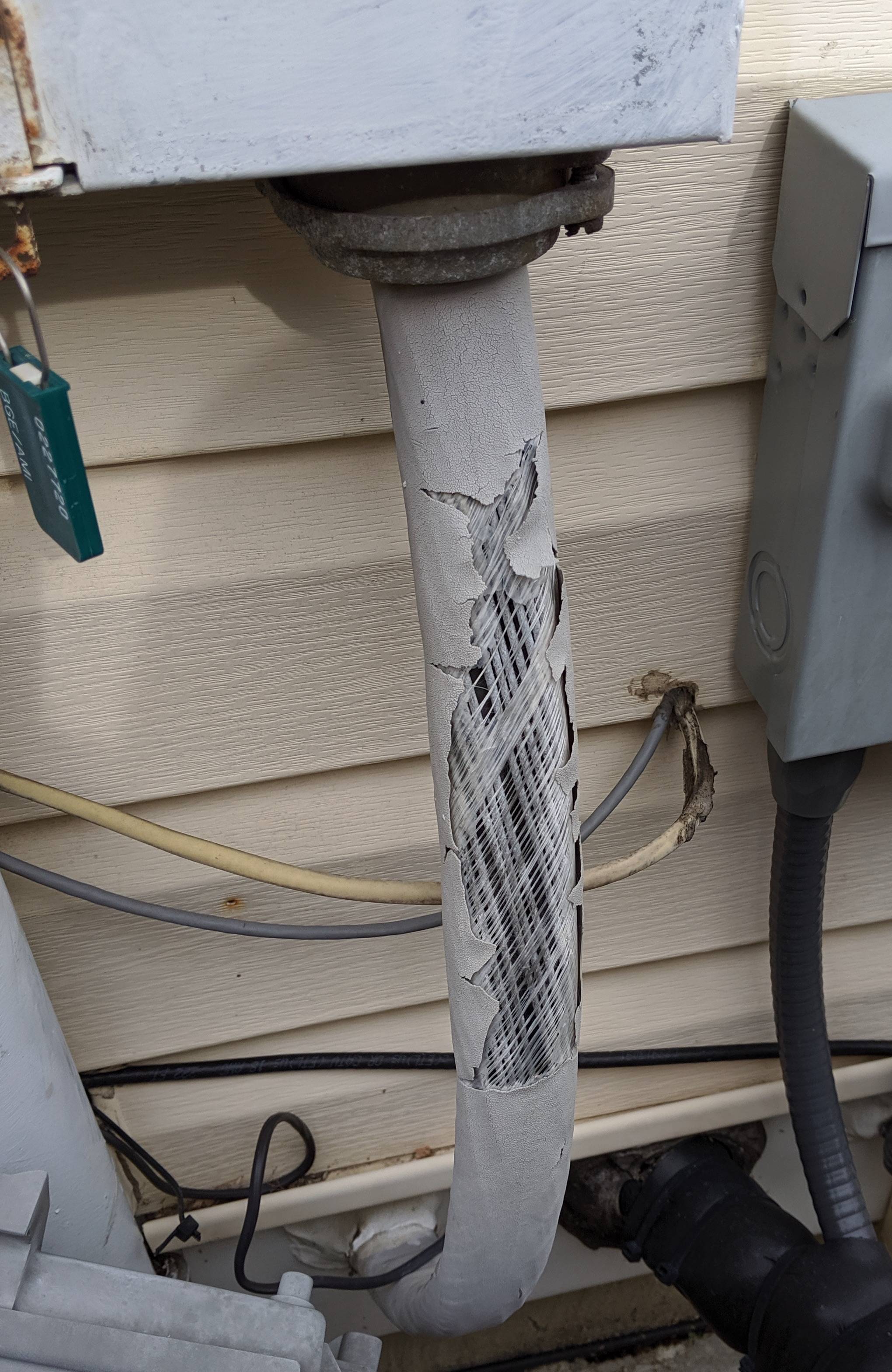 I'd echo the previous suggestions. To directly answer, either electrical tape, or they make a butyl tape that is 4" wide and would cover faster (Gorilla makes an Outdoor tape). The purpose there is to protect from further UV degradation and moisture incursion, with minimal abrasion protection of the conductors and insulation inside.

For long term, yeah, that should be in a conduit to protect from damage and inadvertent contact, I'm surprised that is passed code. The sheathing isn't meant for UV exposure outside and needs to be minimally protected from that, but because it's technically in a traffic area, should have a conduit from the structure to the box. Not expensive on parts, PVC would likely be acceptable, but even rigid would be meager for that length of run. You should pull new wire, but as it will be enclosed in a conduit, you would use separate connectors rather than a bundle. (Technically you could reuse the wires if they reach once separated from the sheathing, if they pass code requirements.)

The expense and time is having it inspected, as it would likely involve a meter pull and the inspect before popping your meter back in, and power company would likely need to re-tag the meter. (Hard to tell from the pic. If that is off of a sub-panel off the side of the meter, with a main in-between, then you may be able to avoid the above.)

And in some municipalities, once you modify in any way, you could lose the grandfathering of the prior NEC under which it was installed. A licensed electrician for your area would be the best source of info on this, this is only unlicensed opinion from vary stale experience in electrical contracting.

A 3” (or so) pipe (personally I would use a UV resistant pvc or plastic pipe, even painted to match) sliced open lengthwise that would clip over it and give excellent protection...

Have to open it out at the bottom though.

If it were mine, I would:

Enclose the cable in 2" or larger galvanized conduit. Of course, to do that you will have to call the power company and have the meter base pulled temporarily. I cannot tell from the photo, but this appears to be going into a basement/crawlspace and therefore at vegetation level. Would hate for someone to hurt themselves getting into it with a weedeater or other tool accidentally.

Not the answer you're looking for? Browse other questions tagged wiring repair electrical-panel or ask your own question.