I'm attempting to wire a generator to my main panel. I was expecting a separate grounding point and neutral in my panel. It appears as though there isn't separate connections for each. It looks as though both the grounds and the neutrals are connected to the same terminal. I have read that this is acceptable in the main panel. I just wanted clarification before going further. Should both the white and bare wire be connected to the same vertical terminal while the remaining wires connect to the double pole?

Note - the generator is being connected in the bottom left position... See picture for details. I will be adding an interlock to the panel to prevent the main from being on at the same time as the generator. Its a predator 8750. The main is 200. 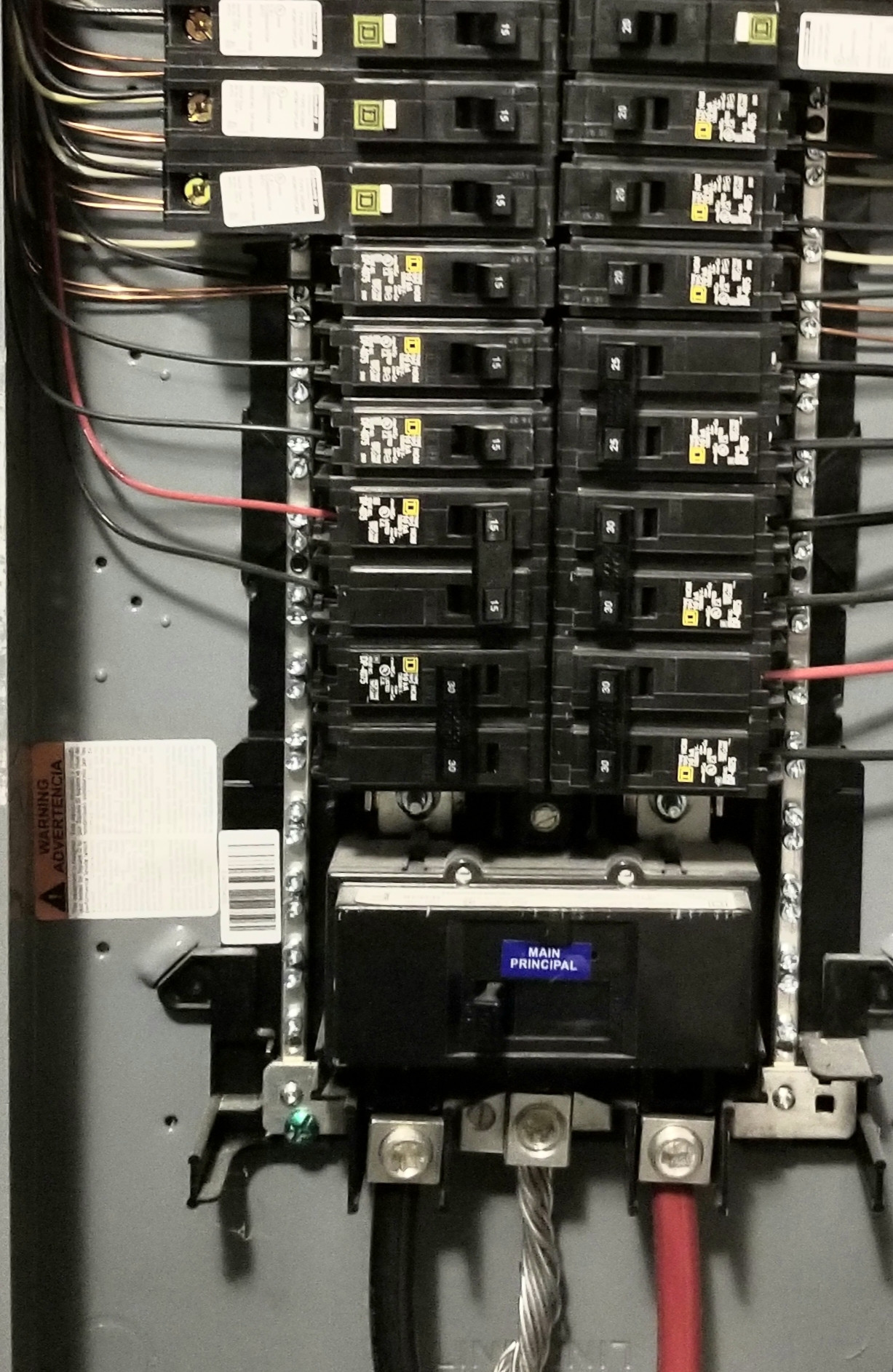 The 4 Rules of Standby Generator Hookups

There are four rules that must be followed in order to have a safe and Code-compliant generator hookup:

It appears that you have 1 and 2 taken care of, and 3 is not hard (just use the proper inlet box if you don't already have one, it's not that hard to find), but point 4 is where your plans are running aground, in more ways than one.

There Can Only Be One (Neutral-to-Ground Bond)

One of the fundamental rules of grounding is that there must be one, and only one, place in a typical building's electrical system where neutral and ground are connected, or bonded, together. In most houses and other light-duty buildings, this is done in the main panel; as a result of this, most main breaker panels, yours included, are shipped with their bonding means factory-fitted, and futhermore lack separate ground bars.

As a result of this, both wires can be connected to the same bar, right? Well...it's not that simple. You see, your main panel provides a neutral-to-ground bond for your house, as it should. However, your generator also bonds neutral to ground (aka the frame), so that it can provide a properly bonded electrical system when it's being used as a standalone power source, such as on a jobsite.

This leaves us with two options for dealing with the problem. You can either

Afloat in a sea of neutrals

The first option is to remove the generator's neutral-to-ground bond, thus making your generator a floating neutral generator. This makes the generator less useful for portable use (as you'll then have to have a way of supplying the neutral-to-ground bond when using it as a portable generator, such as through a L14-30P with a 10AWG wire jumpering N to G that is then plugged into the generator's L14-30R when used as a portable), but would let you use it with your interlock setup (the correct interlock for your panel is a HOMCGK2C, by the way) with no further ado.

The downside here is that you'll need to have your generator spend some quality time with a qualified generator serviceperson for this to happen, as your generator's manual provides neither a wiring diagram nor a procedure for removing the N-G bond for standby usage, and technical support was of no use in that regard either. Of course, you could return it and get a generator that provides better support for such usage, for that matter.

Giving the neutral the switcheroo

The other option you have is to set up your standby system so that it can work with generators with bonded neutrals. However, this requires switching the standby neutral between utility and generator power, so that the standby loads are only connected to one neutral-ground bond at any given time. This is something ordinary breaker interlocks cannot do, as ordinary circuit breakers don't switch the neutral; in fact, there is no such thing as a switching neutral breaker in Square-D Homeline, never mind that Square-D simply does not make a main breaker which switches the neutral wire.

As a result, you'd need to use a separate transfer panel for this route; the XRC0303D (now replaced by the XRK0303D) from the Reliance Panel/Link X series is probably the simplest choice for your application if you want to go down that road, as you can simply transplant your existing Homeline breakers into it for the circuits you wish on generator power. It does require some rewiring (using a fat nipple between the two panel enclosures and a bunch of THHN to route circuits between the two panels), but would let you use your existing generator, or really any portable generator of suitable wattage, in its factory-stock/unmodified configuration.

Not the answer you're looking for? Browse other questions tagged wiring generator or ask your own question.

1
How do you connect one generator to two separate boxes?
0
Getting full power from my backup generator to my electrical panel
0
Tripping of generator GFCI 30amps breaker
1
Can I back feed my panel with a lower amp breaker than the service inlet?
3
Can I power a two-phase home service with a single-phase generator?
2
Connecting 240 volt generator to Main Panel
1
Can you have neutrals on ground bar only bonded through main panel body
0
Generator Transfer Switch for 2 Panels
1
New Generator Help Please