How to prep spruce treads for staining

I ripped out carpet for my stairs and there's 2X6 spruce wood underneath.

It's in pretty rough shape. Had lots of staples. Some paint. Some spilt varnish.

My question is are these stairs salvageable, I would like to stain these stairs but they aren't oak. Wondering what I should do. 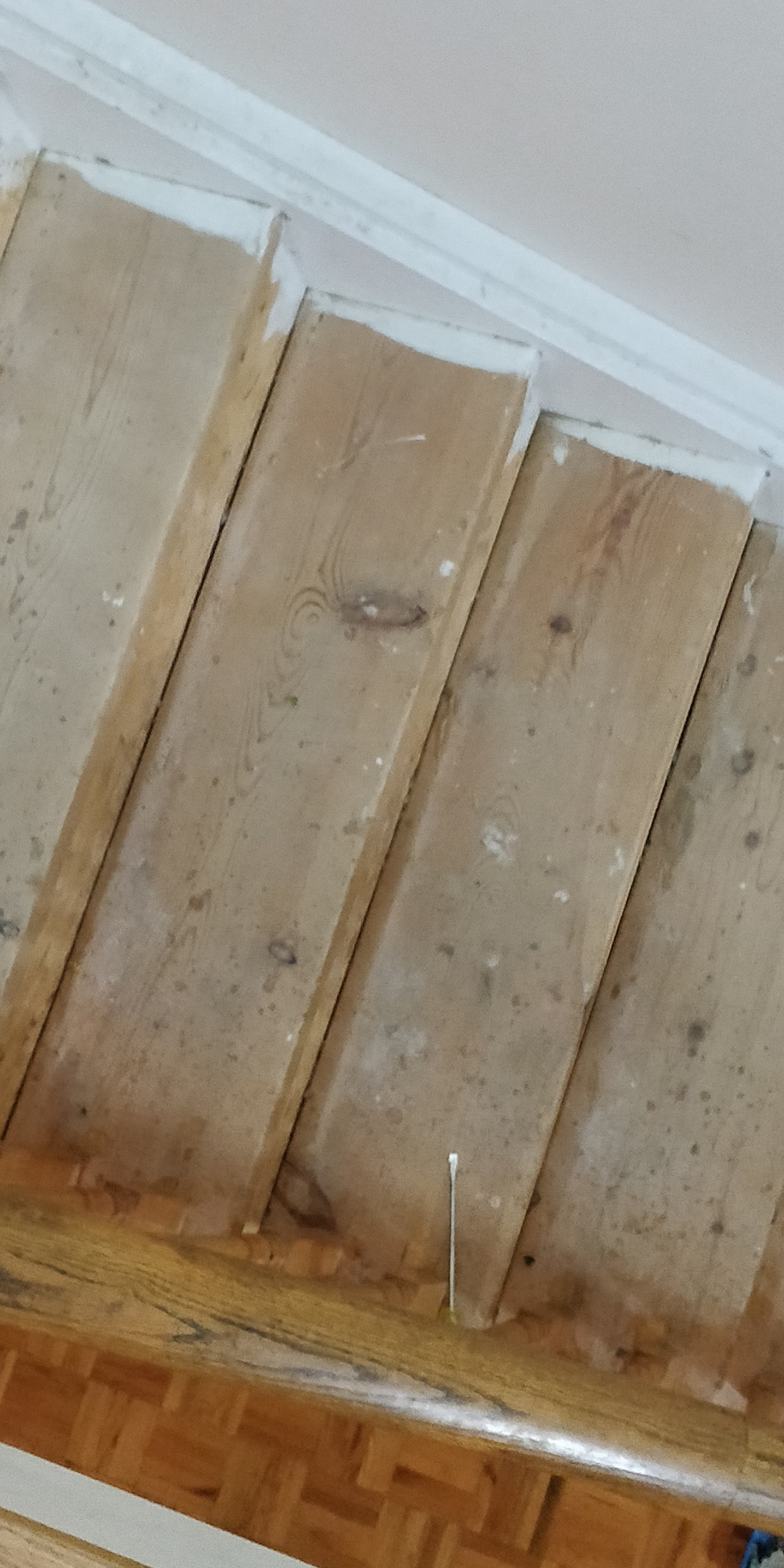 If it were my stairs and I had the budget for it, I would remove the handrail and balusters, pop the 2X treads and replace them with oak treads. The would eliminate the need to scrape off all the paint at the skirt board area and the clear coat around the balusters. It is a trade off on where the work is done, but in my opinion, it will give a better product once done.

Some of the treads appear to be open on one side, new treads can be purchased with the returns already added, simplifying the install. The new treads can be stained before install, making the finishing easier. The skirtboard at the wall will need to be touched up where the original 2X treads were because the new treads ill be 1/2" thinner. This will also affect the balusters when they go back in, since the handrail should be lowered 1/2" to keep the balusters in the original position. You could simply move them forward, but I feel that would put them too close to the nose of the new treads.

I would also use a 1/4" paint grade plywood to reface the risers as mentioned in another post, and return that with a "stair riser bracket". This would help disguise the end grain of the plywood riser better, by mitering the riser bracket to the new riser covering. 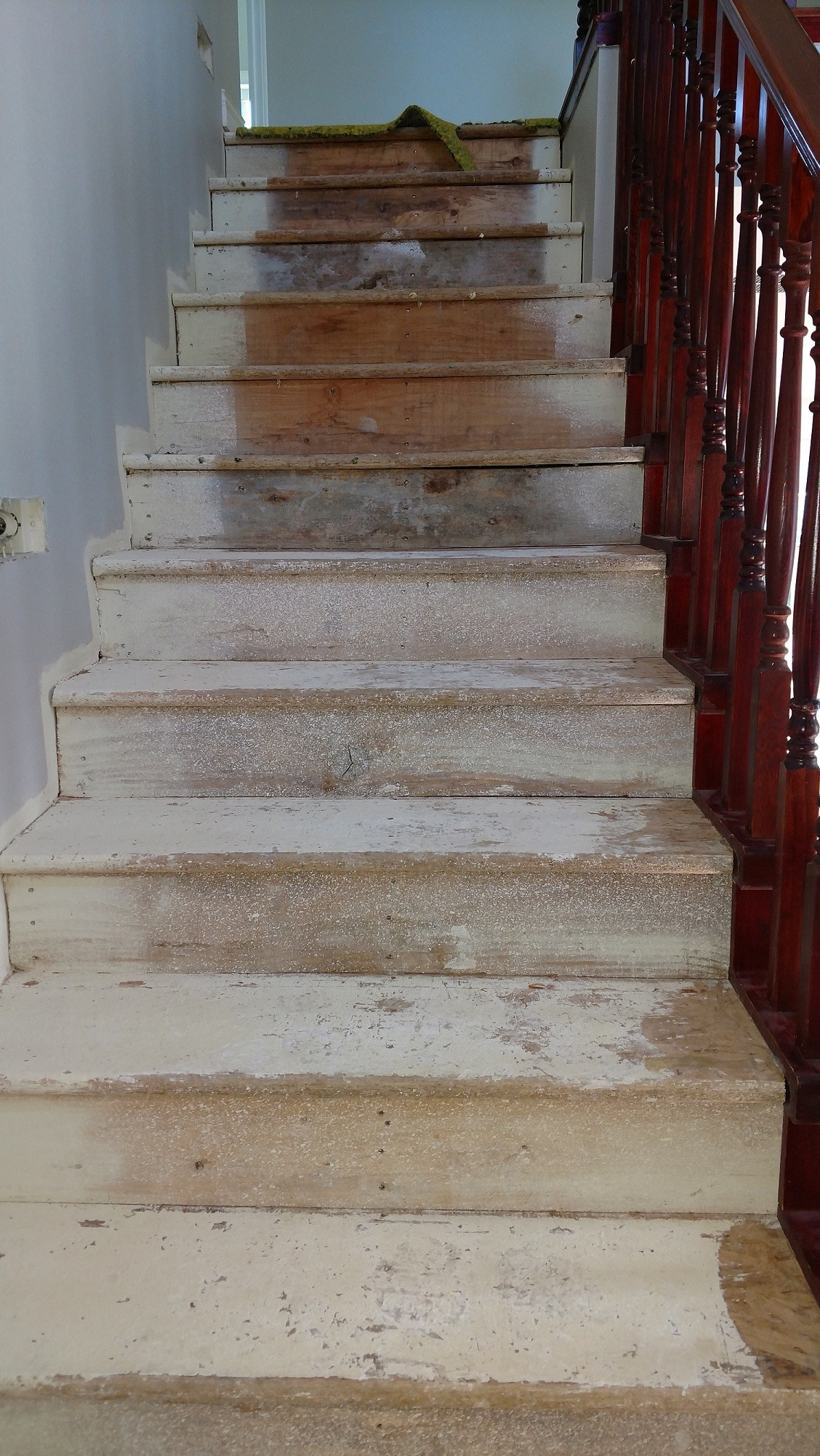 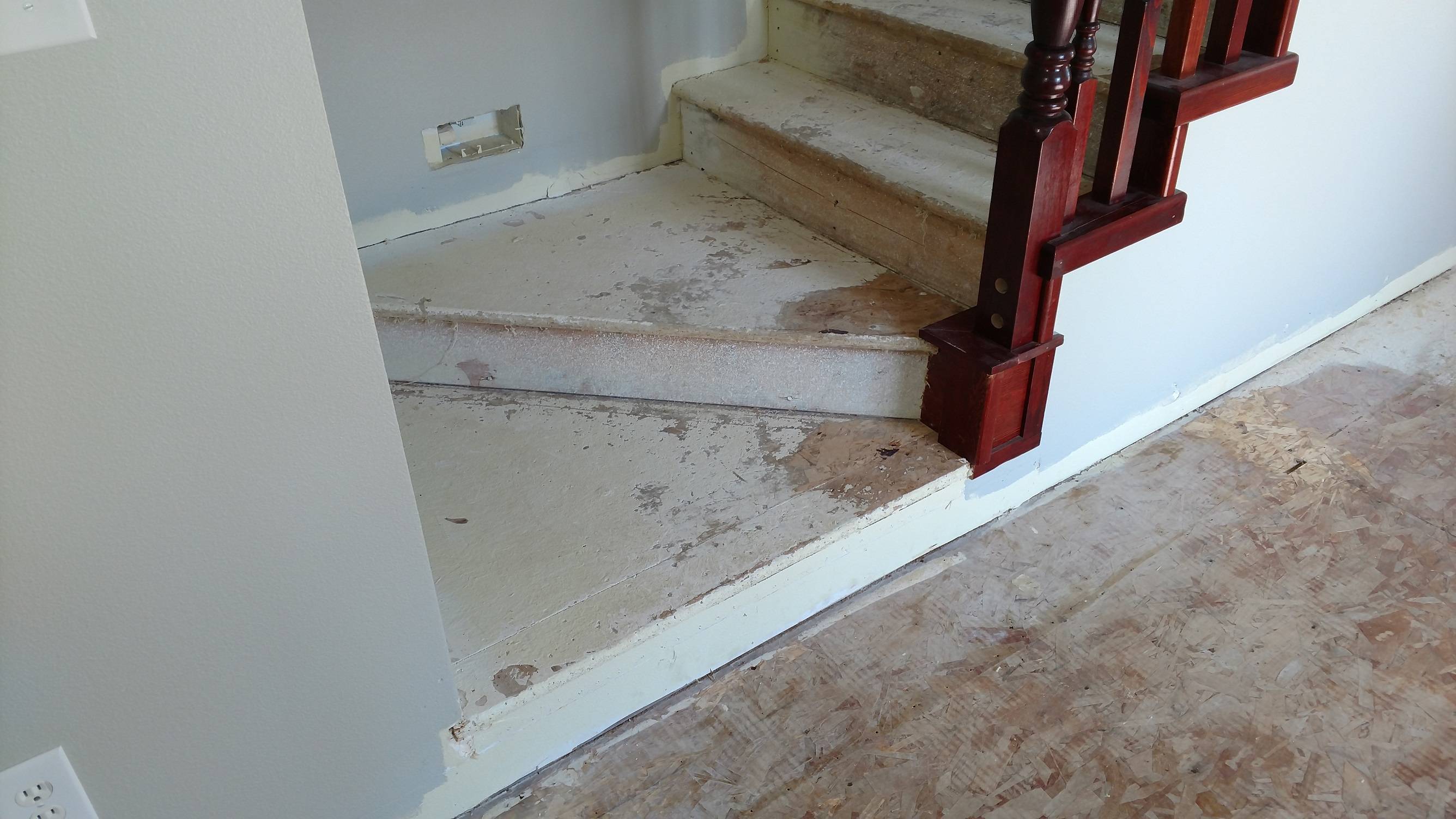 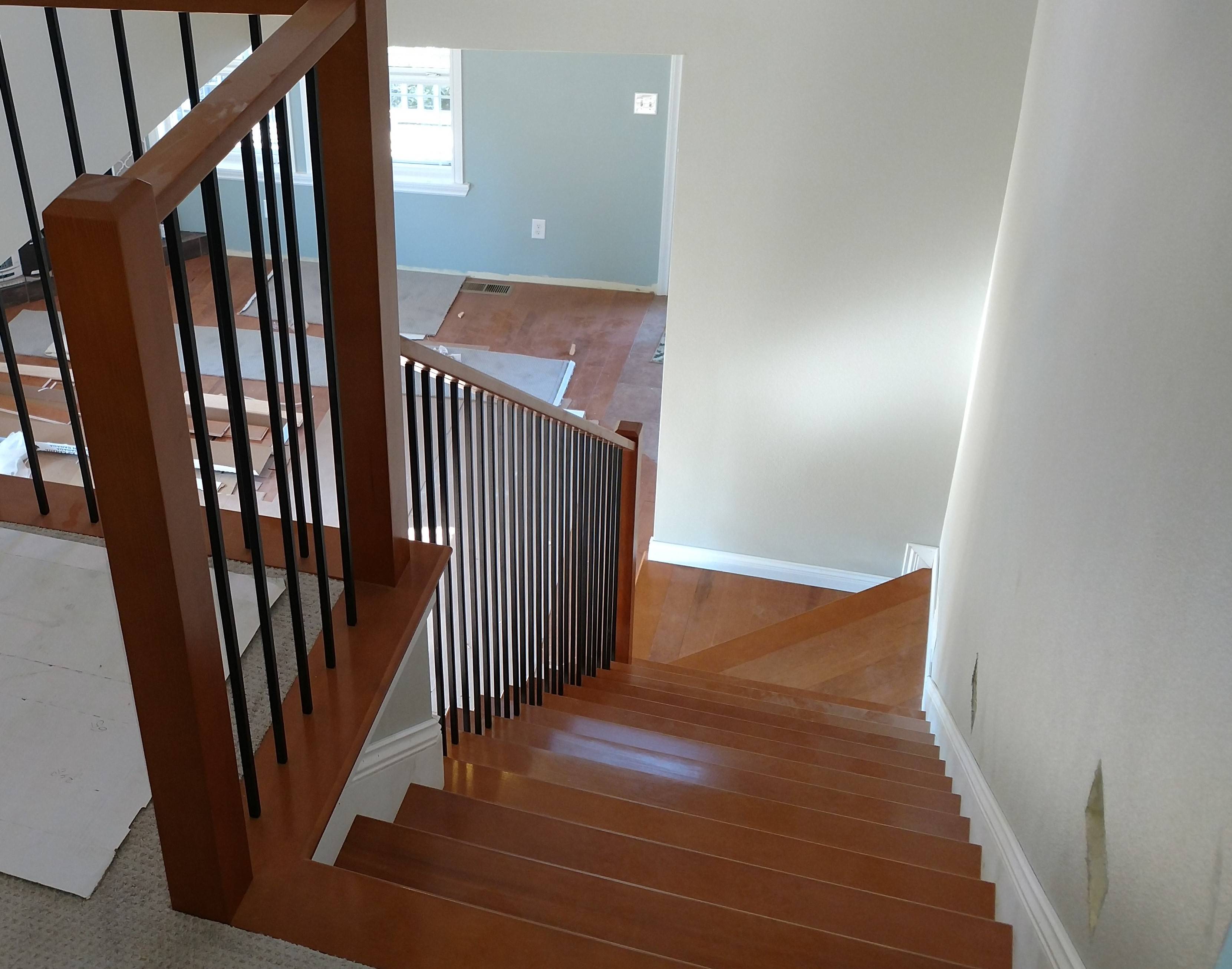 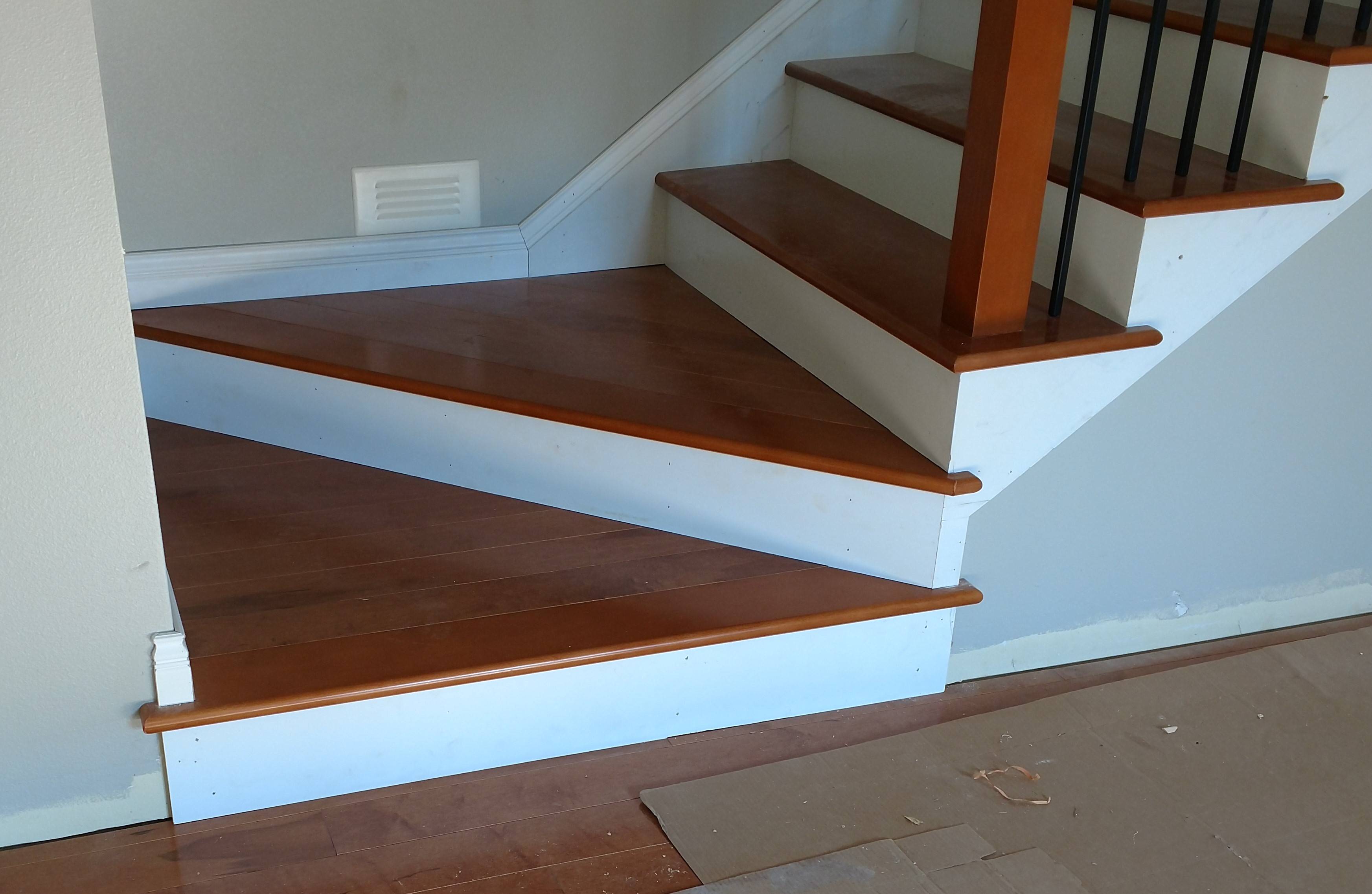 I could only find example of stair riser brackets that did not show what i wanted without copyright infringement but a Google search will fill in that part, so I hope.

This link is for a scraper that will remove the paint along the edges of the skirt boards and in between the balusters. The pros use a still smaller version of this, about an 1 1/2" wide, this is 2" and should still get in the tight places. The wider the scraper the better for a newbie, it will be more stable and not as prone to gouging out on the edges, but still may. A little care at first will help you get past the learning curve. The blade in this one is carbide and is not resharpenable unless you have a diamond stone and that takes time too. You will want to get a pack of replacement blades to get you through the whole task. You could get another type with a tool steel blade that is resharpenable with a file, that is the kind I seen the pros use, then you need to learn how to sharpen them. The replaceable blades are the best choice, unless you know how to sharpen the tool steel type already.

After the edges and around the balusters are done, a random orbit sander will get the rest in the middle. Start with 80G to get the rest of the paint off, then remove these scratches with 120G and make a final pass with 180 or 220G for staining. I would still use the 1/4" plywood for the riser with the return done with a stair riser, a simple one, could even be a piece of lattice to cap the end of the plywood.