Why do gas water heater exhausts have an air gap before the chimney?

Every conventional (i.e., non-direct-vent) gas water heater I have seen has a roughly 1" vertical gap between its exhaust port and the exhaust vent (or "chimney"). See photo below. What function does that gap serve?

How does the gap not pose a danger? I assume that we never want combustion byproducts potentially venting into indoor spaces. But if the chimney were to become blocked, or during any air pressure imbalance between the exterior and interior, this gap seems guaranteed to vent CO2 into the living space. (And if the burner is not functioning properly, the exhaust could include carbon monoxide.) 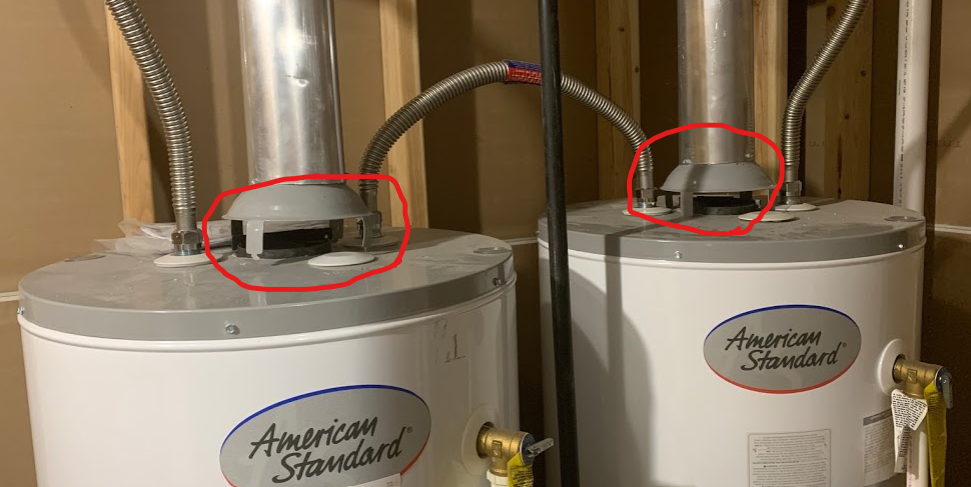 This is a draft diverter.

If the heater was connected directly to the chimney, the hot flue gas would rise, creating draft in the heater. While that is a good thing, the amount of draft would depend on the particular chimney configuration in that installation, amongst other things.

Excessive draft can cause problems, such as too much air being drawn through the heater by a tall chimney, which would lead to dilute combustion causing lower efficiency. In extreme cases it could even blow the flame out.

The air gap avoids such problems, because the pressure at the outlet of the heater only depends on the heater itself, and is independent of the particular chimney configuration. So long as the chimney is at least a couple of times larger than it needs to be, the system will find a natural balance, where amount of air drawn in increases until the frictional pressure drop matches the bouyancy draft of the chimney.

It also allows for an occasional downdraft, which could occur if a gust of wind hits the chimney. Yes, you'd get a small puff of combustion products into the room, but a cleanly-burning heater doesn't emit much if any CO, and that's better than blowing the flame out.

The actual amount of combustion air - i.e., air flowing past the burner to provide oxygen and leave with less oxygen but more CO2 and possibly other combustion byproducts - is very little. The gap allows additional air to flow in and the combined air, if the ductwork is designed and installed properly, flows through the ductwork and out of the house.

If you did not have the gap, the amount of air naturally flowing through would often be too little to flow at a decent speed and would instead be more likely to sit in the ductwork. Hard to explain, but it just wouldn't work right.

Now furnaces and hot water heaters are so efficient that there is a different problem - the exhaust air, which you still want to get rid of because of CO2 and other potential problems, is too cold! So it doesn't rise as well on its own. That places a lot more rules on how to vent the exhaust, to the extent that where in the good 'ol days you would replace a furnace or hot water heater and reuse almost all the exhaust ductwork, now there is often a lot of work involved. But I digress.

manassehkatz covered a lot, but the simple answer is constant air flow

The draft will change in the chimney as exhaust vents towards it – especially when going from cold air to hot. A draft hood is placed above the upper most part of the gas furnace to draw air into the chimney and makes it possible to draw more or less air through the chimney as necessary to create a constant flow.

This makes it possible for the burner to enjoy consistent air flow without any wind gusts or sudden temperature spikes or drops. Hot air, if not put through a draft hood would create a strong air flow through the burners.

A draft hood cools the air as it is released by the burners from 500 degrees F (260 °C) to between 300 degrees F and 350 degrees F (150 °C - 180 °C). The cooling needs to be carefully calibrated to avoid condensation build up in the chimney however – a problem that occurs when the temperature gets too low.

Not the answer you're looking for? Browse other questions tagged water-heater gas exhaust-vent or ask your own question.