What are the legalities associated with mounting splicing wire connectors?

There are some situations, such as those involving large junction or pull boxes that serve as central takeoff points for many-plexed homeruns or homerun banks, enclosures that form central splice points for control wiring, or situations where a panel cabinet is converted to a junction/pull box, where there are so many similar wires and splices that using free-floating wire splices edges towards the verge of no longer being "neat and workmanlike" to the standards of NEC 110.12.

While these sorts of problems are commonly encountered in the industrial controls world, the solution they use over there (namely, terminal blocks or terminal strips, whether they be of the NEMA style sometimes sold in hardware stores or of the IEC/DIN style used more commonly in industry) is not applicable for field mains wiring, as terminal blocks are only available in the form of UL recognized components (to UL 1059, Category Code XCFR2). Furthermore, UL listed power distribution blocks (to UL 1953, Category Code QPQS), while legal in this application, have several drawbacks: they are large and relatively expensive relative to normal connecting means for 14-10AWG wires, while the available configurations are not conducive to single-sided tapping and splicing or to connecting large numbers of similarly-sized wires.

As it turns out, though, there is such a thing as a mountable splicing wire connector: ILSCO (NIMBUS PBTM aka PBTD-M) and NSi/Polaris (Polaris IPLM(D)) make mechanical screw-type connectors that have mounting holes for bolting to a chassis or enclosure, and, more importantly, Wago makes DIN rail carriers for their 221 and 222 series splicing connectors (the 221-500/221-510 and 222-500, respectively). This appears to be all well and good, as the underlying splicing connectors are all UL listed (to either 486A-B for the mechanical screw splices/taps, or 486C for the lever-type splicing connectors), until you stop and check the definition of "splicing wire connector" found in UL 486A-B-C and ZMVV.GuideInfo:

So, does the act of permanently mounting a splicing wire connector to an enclosure using a manufacturer identified mounting facility void the listing of the connector, putting me back where I started? Or does this situation simply mean the AHJ must make their own determination of acceptability, instead of being able to say "that's listed, so you're good?" What applications are these mountable splicing connectors even intended for, if they cannot be used in applications where a UL listing is required?

Mounting a splicing wire connector turns it into a pumpkinterminal block

We know that by definition, as per ZMVV.GuideInfo:

, a device listed to UL 486A-B-C as a splicing wire connector is intended to be free-floating in a box, not mounted to a surface. When we mount such a thing to a box, though, it then provides a set of wiring terminals, with the mounting means becoming a supporting block for said set of wiring terminals. By definition, as per XCFR2.GuideInfo:

This category covers assemblies of wiring terminals and supporting blocks intended to provide a means for the connection of wiring. These terminal blocks may employ terminal connectors, wire-binding screws, quick-connect terminals and similar friction fit terminals, which are intended for factory-wiring and/or field-wiring connections.

, we now have a terminal block, which as per UL 1059, is not rated for field installation, as the creepage and clearance distances (spacings) and short-circuit current ratings on terminal blocks must be further evaluated by UL in the end application. Furthermore, it cannot be a power distribution block, listable to UL 1953, because as per QPQS.GuideInfo:

, the individual connecting means in a power distribution block are considered terminal wire connectors, which are defined by ZMVV.GuideInfo:

Terminal connectors establish a connection between one or more conductors to a terminal plate or stud, or to any similar device by means of mechanical pressure. They are fixed in position.

to be mutually exclusive from splicing wire connectors.

What can you use a terminal block for? Control circuits, that's what!

So, if you cannot field-install a terminal block into a mains circuit, what are they good for, then? The answer, as it turns out, is control circuits that fall under NEC Article 725. First off, wire connecting means generally must merely be identified, not listed, as per NEC 110.14:

110.14 Electrical Connections. Because of different characteristics of dissimilar metals, devices such as pressure terminal or pressure splicing connectors and soldering lugs shall be identified for the material of the conductor and shall be properly installed and used.

This, by itself, does not prohibit us from using terminal blocks for mains wiring. What does prohibit that usage is the listing requirement for power distribution blocks, found in NEC 314.28(E)(1) (with similar wording in NEC 376.56(B)(1)):

But, there is still hope!

If one wishes to join 14-10AWG mains circuit wires en masse in a tidy fashion, though, without resorting to the rather unnecessary bulk of power distribution blocks, there is still an option on the table though. Some manufacturers make enclosed terminal block assemblies that consist of a UL 1059 recognized terminal block whose terminals are considered "suitable for field wiring" that has been factory mounted into a plastic or metal enclosure (junction box). This assembly is then UL listed (as a trivial UL 508A control panel) as an assembly, which means that it can be used for field mains wiring without having to worry about the precise approvals of the terminal block itself.

Furthermore, while these boxes do not ship with grounding bars by default, one can add a UL 467 listed grounding bar (such as a Penn-Union NA-414) to such an enclosure to provide a central grounding point, thus saving the terminal block's terminals for current-carrying conductors (hots and neutrals), as per the Exception to NEC 314.28(E):

Finally, if you cannot find a suitable assembly prefabricated/stocked, you can ask a local industrial control panel shop with the appropriate certifications to custom-fabricate such a thing for you and get it approved under their UL 508A listing, although at a not-inconsiderable cost compared to a prefabricated unit.

What if the wires are mounted while the splices remain floating? The wires could be bent and fixed neatly as one might do when setting up a terminal block, but then instead of using a terminal block, use a splicing connector.

The following products are made by Advanced Cable Ties. In order, these are anchor mount, mounting base, mounting hole cable tie, and fir tree cable tie. They say they make products that meet UL Type 21S, though it wasn't immediately clear which of those I've pictured below might be included in that claim. Would it be legal to use devices such as these to organize the conductors in a large junction/pull box? All styles could be fixed to the walls or rear of the box; some styles could be stacked on a field-installed screw/post or fixed to a field-installed divider mounted in the box. 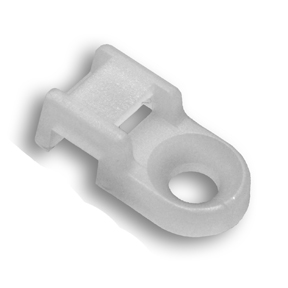 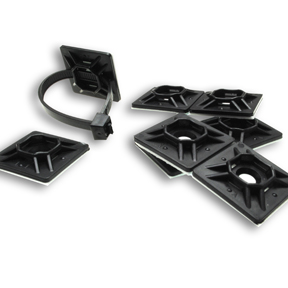 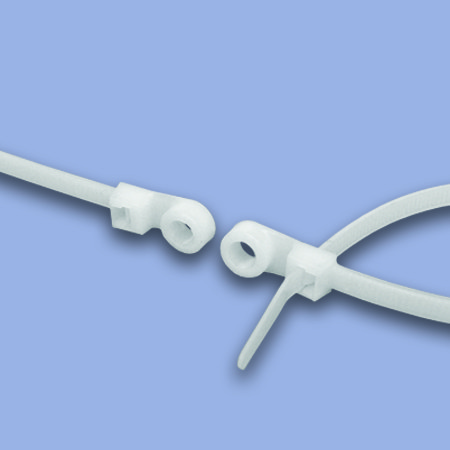 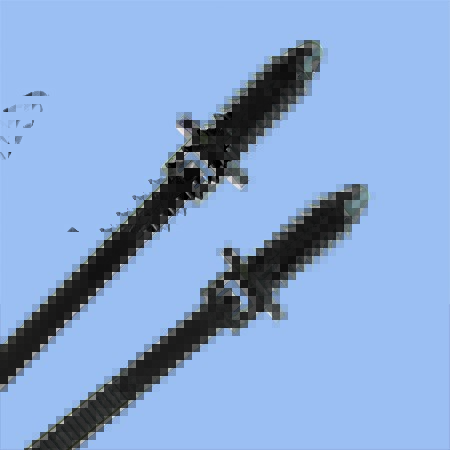 38
Are push in connectors up to code?
2
What are the pros/cons of different wire connectors on a switch/outlet? OR How can push-in wire connections fail?
4
Safest Way to Contain Spliced Lamp Cord
26
Is twisted and taped splice on cable, objectively any less stable than wire-nuts or terminal blocks?
3
Do Scotchlok connectors meet code?
1
Can a UL 1953 listed power distribution block be deployed in a panelboard cabinet?
0
DIN Rail Splitter?
0
Stranded wire gauge too small for push-in connector(USA)
1
How to wire this 4-wire range terminal block with pin style connectors?