Thought it might be the problem with the flexible venting that was crushed, but I've replaced it all with solid 4" venting and it for sure blows hard outside so maybe something else is wrong.

I tried an experiment while running it with the door open: I set it to low heat and waited for the element to turn off, which only took about 2 minutes. Then I cranked it up to medium and then to high heat. I was expecting the element to come back on, but it didn't... it stayed off.

I've been trying to understand the wiring diagram for the temperature selector on this model, maybe starting to get it now. The fabric selector switch is shown in the diagram with the switches in the "high heat" position. For "medium heat" they also close 3-4. And for "low heat" instead of 3-4 it's 4-5. So that switch ultimately only connects the L1 hot line to the "thermostat heater" if it's got low or medium selected. Didn't really click until I was typing it out for this post but I guess the temperature control really works by heating the thermostat itself to make it seem hotter, which means my original experiment was actually completely flawed. 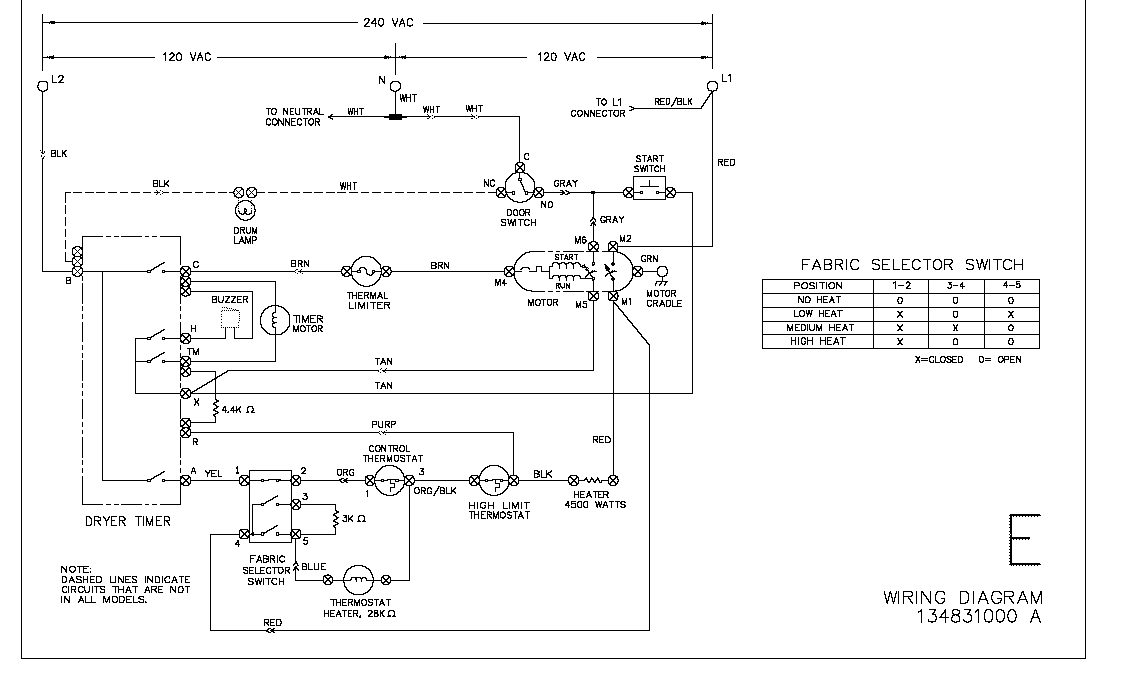 So I planned another quick experiment to test it, to simply measure the time before it switches off in low heat vs high heat setting after cooling in between. I've now completed that experiment and the dryer seems to take a consistent 90 seconds to shut off the heater, regardless of the heat setting that's selected.

Not sure what else could be wrong, pretty sure the unit used to dry faster than it does now. Hit me with any other advice you have. Hoping to troubleshoot this as much as possible without accessing the back of the dryer (it's a pain to disassemble/tight space). I can remove the front panel fairly easily and have a multimeter.

Browse other questions tagged dryer or ask your own question.

2
Why did my dryer shut off in the middle of drying a load?
1
Clothes Dryer will not heat up
2
Is a 4 Ohm reading on a dryer heating element bad?
3
Why do the wires to my dryer's thermostat keep burning off?
1
Short circuit in dryer?
1
Clothes Dryer Stops Heating
1
Why did the high temp thermostat in my dryer fail when I disconnected the buzzer?
0
How to test dryer components
0
Gas clothes dryer not heating