We've been living in our house for 10 years, and a few years after moving in our sewer line began backing up every 6 months or so. Each time, we'd have to pay a plumber to come in a "roto root" or snake the line, and they would pull up all sorts of roots and growth that had seeped into the line. As it turns out, our line was made of orangeburg (basically, tar paper!) which was popular back in the 60s and 70s which is the era our house was built. This orangeburg apparently was starting to fail and allow roots from a nearby tree to grow into it, but was also structurally failing and beginning to collapse in on itself. Every time we've brought in a plumber to snake the line, they've reported worse and worse deterioration in the line. So two days ago (after kicking the can on this for nearly 7 years), we finally bit the plumbing bullet and ordered a septic service to replace the line entirely.

They did good work, but because the line was so severely deteriorated they decided to drill a new hole through our foundation from which to run the new line. The work was done and over with in just over a day, and we were happy with the work they did. No complaints.

However, its been raining all day and I just went down to the basement, and the whole entire area surrounding where the sewer line leaves the house is now leaking rainwater in from around the cinder blocks (yes, cinderblock foundation): 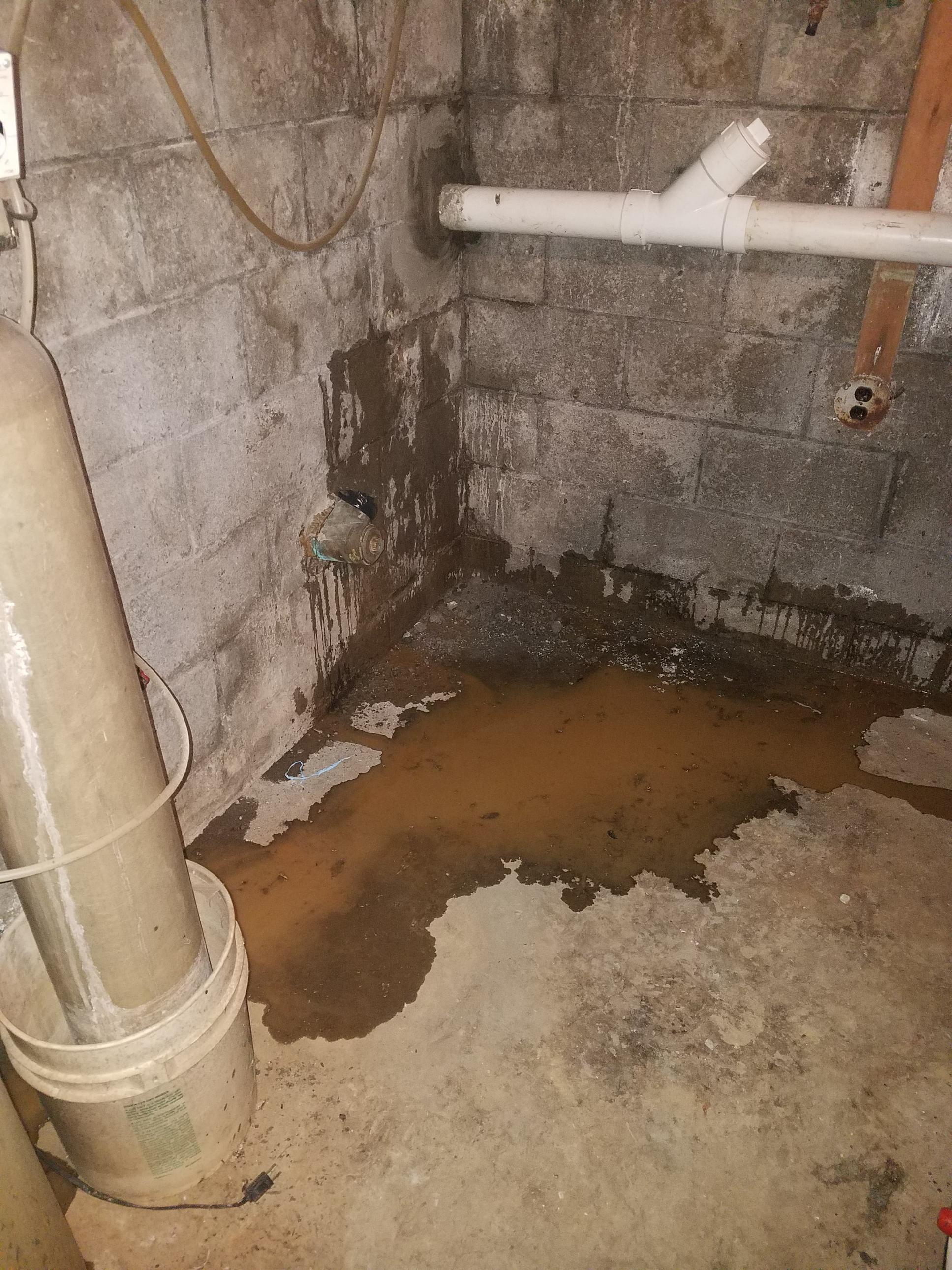 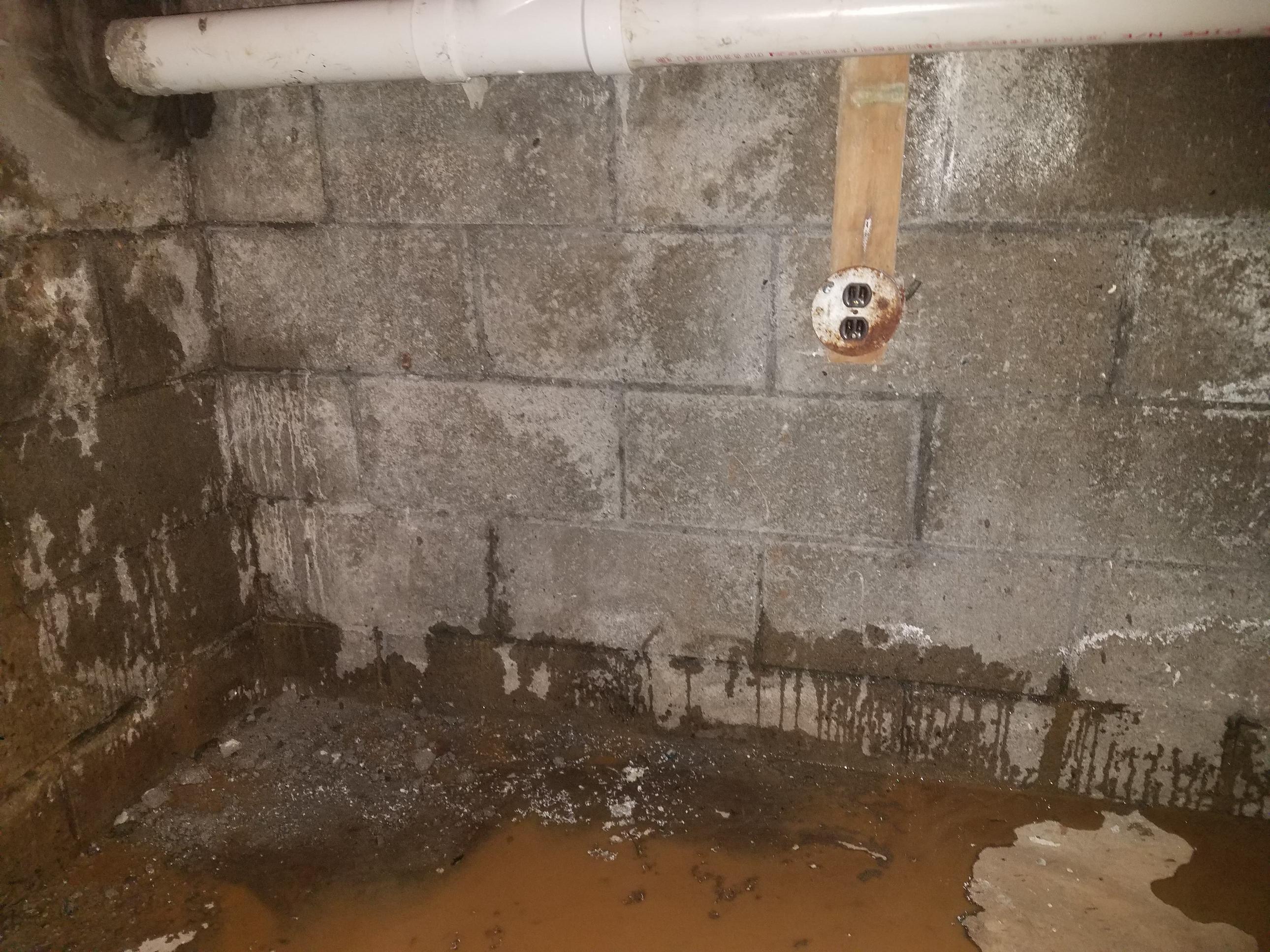 If its not obvious, the white PVC pipe going into the wall is the new sewer line. Previously that white PVC coupled into a copper pipe and then angled down to the old connection which you can see is a few feet below (capped off with black tape).

A few noteworthy items from the pictures above:

I can think of 3 possibilities as to what would cause this:

I'm looking for a solution here. My first inclination was to just parge the inside (basement) of the foundation to prevent water from getting in through the cracks. But after reviewing the play, I don't think that will stop rainwater from getting into the cinder blocks, and once that freezes this winter, expanding + contracting will start to bust those blocks up and totally ruin our foundation...

So, here's what I'm proposing, and I'd love to hear feedback and better suggestions from this community if anybody has any to offer:

My thinking here is that the trench drain will stop 90% of the ground water from ever reaching the cinder blocks that are leaking, and the < 10% that does make it there will hopefully be stopped by the parging on the outside of the block. The parging on the inside is just yet another line of defense but is admittedly probably not necessary.

Given all the information I've provided, is the solution correct, only a partial solution, or totally outlandish? What is the correct solution here? Are there are aspects of this I might not be considering?

Block walls are not waterproof, in fact solid concrete ones are not all that waterproof either. The way to prevent what you're seeing has 3 components:

At least one of these has changed and the worst culprit in most cases is item 1. Check your drainage and your downspouts. Is anything discharging water near the foundation? If so, fix the problem so that all drainwater is routed away from the foundation. Is any water pooling? Fix that.

There should be a foundation drain at the bottom of your wall that allows water to drain away from the foundation. Is there one? Is it blocked? Anytime the water pressure outside the wall exceeds the ability of the wall to block it, the water will infiltrate and flood the basement.

A block or concrete wall should be sealed from the outside. I know there are inside seal products marketed but these are like band-aids over a major injury. They don't solve the problem they only mask it.

As far as fixing this, if this were my home I would do it right. Yes, you'll need to dig it out to the bottom and either find/repair the existing foundation drain or install one if it's missing or damaged beyond repair. Best case you go all the way around and install a pipe that carries the water to a storm drain or other place where this water should go.

Then I would seal the outside since you have it exposed. There are products on the market that seal and provide a weep-space for any infiltrating water to drain down.

Finally refill the trench and grade it away from the foundation.

Is that a lot of work? Yes it is. But you have a major problem that will eventually ruin your foundation.

Not the answer you're looking for? Browse other questions tagged basement foundation drainage septic flooding or ask your own question.

2
What is involved in replacing leaking iron drain pipes in a house with a concrete foundation?
0
Waterproofing weeping tile inside vs outside
2
Does this foundation wall crack justify immediate corrective action?
0
Best way to parge exterior stone foundation wall
1
Is a too-shallow foundation allowing excessive water into my dirt crawl space?
0
How far out to install French drain so water can't pass underneath it and still get into house?
0
(Temporary?) remedy for crack in poured concrete foundation
3
Basement flooding from backwater valve pit groundwater... but why now?