Can I add a second disconnect main breaker load panel from the meter trough?

I am wanting to run power to my new shed and I am thinking of running 10-3 with no ground at a distance of 82 feet so that if in the future I maybe be using 220 volts. My new load center would have its own main breaker rated at 100amps would be at the inside of the shed. I currently have a 200amp load center in my basement which is not using all of the circuits in the 200amp panel. I will be installing a ground rod at the shed and the cable will be inside of schedule 40 1" conduit buried from the house to the shed. The local power company here has never checked my meter seal in the 12 years I have lived here, I know this for certain as it has been broken since I moved into the home 12 years ago and we had a tree that took out our power for 1 week and tore the weatherhead and meter socket off of the home and nothing was ever done about the seal being broken. I have on several occasions removed the meter to power the home with a very large generator for weeks when a storm has come through downing trees and power lines. I am wondering if this is a good practice for adding power to my shed or do I need to go another route? Thank you for any comments or advice to what I am proposing to do!

Removing the meter will protect from back feeding but would not be a normal code compliant method of using a generator A 10-3 feeder will only provide 30 amps of power no mater what size the sub panel is.

The best plan is to have a code compliant transfer switch or interlock kit. I know several people that have been back charged for years because of new wiring and a cut seal. They went back to the date on the wire and said the owner modified the meter that was out of calibration. I was only able to help the 1 home owner that I had cut the seal and made a new connection. Back then I had seals but they did not match the electric company’s data so they went back to the date on the wires + 10 years prior, I just replaced the panel with a better quality , permitted, the other 2 had to pay thousands, so don’t think you are getting away with anything and any changes if not permitted and done by a electrician. In the old days I had several sets of seals given to me by the power companies, I put the tag numbers on receipts and permit cards that I did. I would not want to make a change without making sure my customer is protected, it used to never be questioned, but after having seen several people get thousands of dollars back charges for changes (and I doubt they messed with the meter) were charged because the seal was broken and the date they could prove a change was made. Hope this helps but after seeing this I would be careful and not try and cheat because someone may cheat you in the long run.

Your load center inside the shed can have any size main breaker you please; there, we're mainly concerned about the number of breaker spaces so you don't short yourself and run out of spaces later. (there is simply no good reason for that to happen).

As far as running no-ground, that doesn't make any sense. In that case you're relying on dirt as your conductor to return fault currents of 100A or more so you can get the breaker to trip promptly, and that's just not going to work. Grounds have two reasons for existing, one is to arrest natural electricity like lightning and ESD, and the other is to assure a ground-fault in human-generated power results in a breaker trip. You need both a ground rod and a ground wire. If you wanted to violate code and omit one, I'd omit the ground rod.

Wait. What protects the 30A wires?

As far as tapping the meter trough, Where's the breaker? There needs to be a 30A breaker to protect the long run of #10 from the meter pan to the shed.

Cable in conduit. People do that because cable is the only wiring technique they are familiar with. If you insist on running 1 cable in conduit, the conduit must be 38% wider than the widest part of the cable. (with 2, you must add the widths - it makes the size prohibitive). Look into THHN/THWN-2 type individual wires; that's what you want in conduit. It fits much more compactly. (However it can't be stapled to a joist, it needs conduit or raceway protection everywhere it's used. You can switch from THHN to cable in any junction box, though.)

Joining the 30A wires to the main wires 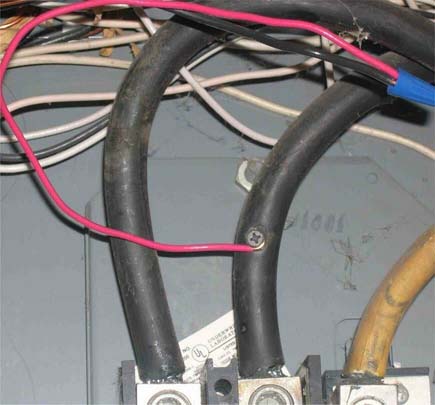 :) (this is here for comedy, it's an appalling example of what NOT to do).

If you were splicing these, you would need to either change the lugs to double-lugs, or have a nice fat Polaris connector that splits you 3 ways. And a stepdown, since a 4/0 Polaris won't take #10.

However, you can't do that because there would be no breaker protection for the 30A wires. Unfortunately the only option to branch from here is to fit a mini-service panel here. It can go two ways, and I'll say "House Amps" for the non-discounted ampacity of the house cable, and 30A for this #10 cable.

Honestly, all this seems like a big enough pain that I would evaluate whether to feed the shed from the house instead of here. It really does monkey-wrench things to change a service lateral into a feeder.

As far as dealing with breaking seals, my SOP is to call the power company that same day, and say "Due to an emergency repair (details here), I needed to break the seal on the meter. Please come out and re-seal it." Now, you are CYA'd, and I really do not know nor care whether they actually do come out. It's in the system that you called; what follows is on them. As far as I'm concerned, while not a legal way to do it, saying "I pulled the meter because I needed to backfeed my house with a generator and didn't have a proper interlock" ought to warm their hearts, because they know you did it to look out for their linemen. You should teach that technique to the suicide cord crowd.

If you want to go another way with the broken seal, good luck. Honestly I think the quickest way to become a magnet for punitive action is if they see poorly done work in the meter pan.

3
Why doesn't my electrical service panel have a main disconnect breaker?
1
How to run second disconnect/load center from meter
0
Does code allow a main-lug-only panel connected to the meter lugs?
3
Can I use a 225A main panel with a 200A meter?
2
How do I connect a Type 1 SPD to this meter main / service disconnect panel?
0
Can I add a breaker to outside main disconnect box?
3
Splitting 320amp service to two 200amp panels with the meter base 200ft from the house
1
What size SER and XHHW-2 do you use with a 200A meter base and a 225A load center (panel)?