Wattage of adapter for LED strip 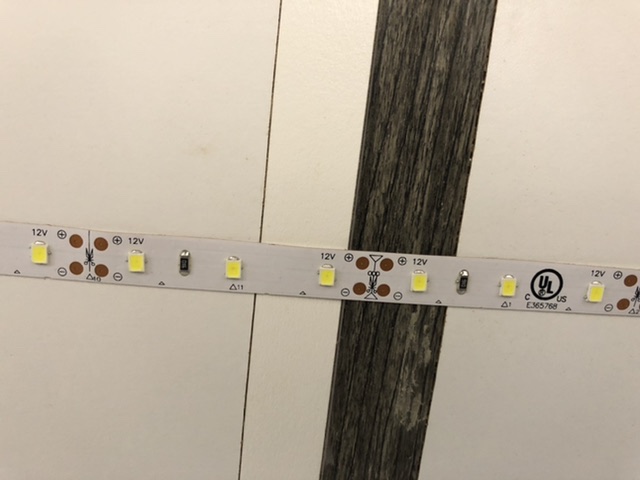 I have LED strip lighting under my cabinets in the kitchen. Recently, they started flickering with noise. Worked fine for a couple of years. I believe it was the adapter that was faulty. Unfortunately, I lost the adapter somewhere so I'm unable to order another without knowing how much wattage should it have.

Here are my queries:

Your LED strip has one resistor per 3 LEDs, which is the standard for a 12V strip. Each group of 3 LEDs is wired in series, with the resistor setting the appropriate current. All groups of 3 LEDs plus resistors are then wired in parallel.

For a strip, the resistors set the current, so you don't need a constant current driver. You need a standard 12V constant voltage power supply.

If you don't fancy getting electrocuted, an enclosed power supply is better than an open frame or naked PCB. I like Meanwell so I'll shill for it. They also make IP68 waterproof models.

If you have a 12V DC wall wart lying around somewhere, that can also work well.

Am I right that the adapter caused the flickering and the noise or it could be the LEDs?

If a group of 3 LEDs fail on the strip, perhaps one LED is dead in that group, or a solder joint cracked.

If one half of the strip fails but the rest works, then the copper trace which carries 12V is broken somewhere around the transition between "works" and "doesn't work."

If all the LEDs are off, or all blinking, then it's either the power supply, wires, or connection between wires and strip.

(My previous experience with LEDs is that if they failed, all of them fail)

If they are all wired in series like in some lightbulbs then yes, one single LED failing open will open the whole circuit, but this is not how strips are wired.

Flickering is caused by the voltage conversion “driver” The driver sets the correct voltage and current level. The problem with today’s led’s Is they can be just about any voltage. For instance I have some 4’ strips that fire at ~40v but need ~60v for full brightness, so you really need to find the specs to get the proper driver for your lights. But yes flickering is a sign of the driver overheating and or starting to fail. I did look closer at your strips and they show 12v so then you would need a supply large enough in watts or amps at 12vdc to light them up.

Unfortunately 3528 is simply an industry standard package name. It means the LED components are 3.5 by 2.8 mm with a specific "footprint" that describes where the terminals and solder should go on a printed circuit board.

We can see in your photo that the polarity and voltage are specified and there are markings where the tape could be cut. There are three LEDs and one resistor (the black component) in each section. That makes sense: white LEDs often have a forward voltage around 3.4. Three of them in series should require 10.2 volts; the resistor performs the role of limiting the current. A regulated 12V supply is all you'll need. The supply doesn't need to control the current for this type of LED tape.

As to the current or wattage capacity you'll need.. If you have an ammeter you could measure the current drawn by one or more sections and multiply up to accommodate the whole setup -- if not, then make a guess. This site claims LEDs in the 3528 package are typically operated about 20 mA per series string.

This appears to be a fairly standard monochrome LED strip using 3528s. And I apologize, but I'm going to use Metric units because that's how they're specced.

Wow, that was easier than I expected.

As always, when dealing with Chinese stuff, you should overspec your power supply by a factor of 2 or 3. So if you figure out 20 watts, get a 50-60W unit. Meanwell is a good brand that you can drive closer to spec.

3
What voltage adapter do I need for a 5 meter 5050 LED strip?
1
LED strip lighting joining cuts?
1
One Big Power Supply vs Multiple Smaller Ones
0
What do I need in order to install under cabinet lights?
0
LEDs bulbs flicker when 3rd added
2
Flat Iron Causing LED Lights to Flicker
0
LED, 2 way switch wiring not working
3
Several LEDs and LED bulbs in my house are failing at the same time and way before their estimated lifespan