My current set up is that I have a switch on the kitchen wall with power from the panel at the switch. Then a 12-3 runs to a box under the sink, where there is a half hot for the plugged disposal. The switched (red wire) feeds the top of the half hot. The always hot wire (black) from the 12-3 feeds the bottom (always on) of the half hot and also is spliced to a GFCI that is on the end of a kitchen island. (The sink is in the island.) (Neutral is also spliced too at the under sink box to connect to the unbroken side of the half hot and the white wire leading to the GFCI.)

So, at the switch box, there's a 12-2 from the service panel, and then leading out there's a 12-3 to the box under the sink. And then from the under-sink box there's a 12-2 to a current GFCI that I want to replace with USB/duplex.

I want to replace the GFCI in the island with a GFCI-protected outlet that has USB chargers in it. I can see a couple of ways to do this. I could probably just put a two-gang box in under the sink and install a GFCI outlet after the half hot and and then put the 12-2 running to the box that will hold the USB on the load from the GFCI. Then I don't need to touch the switch box.

What I'm wondering though is whether there's a way to put a combo GFCI/Switch device at the switch and then be able to run to a switched outlet (for the disposal) and to feed the USB on the load side. I've read a bunch of old questions and have read the Leviton instructions for the combo devices and I'm very confused. I'm ok with the switched receptacle being GFCI, or, as I understand the code, it doesn't need to be for a disposal.

Edit: Still confused about how to wire using existing wiring with a switch gfci combo and the 3-wire romex leaving the wall box. A picture of my best guess here with ground wires omitted: 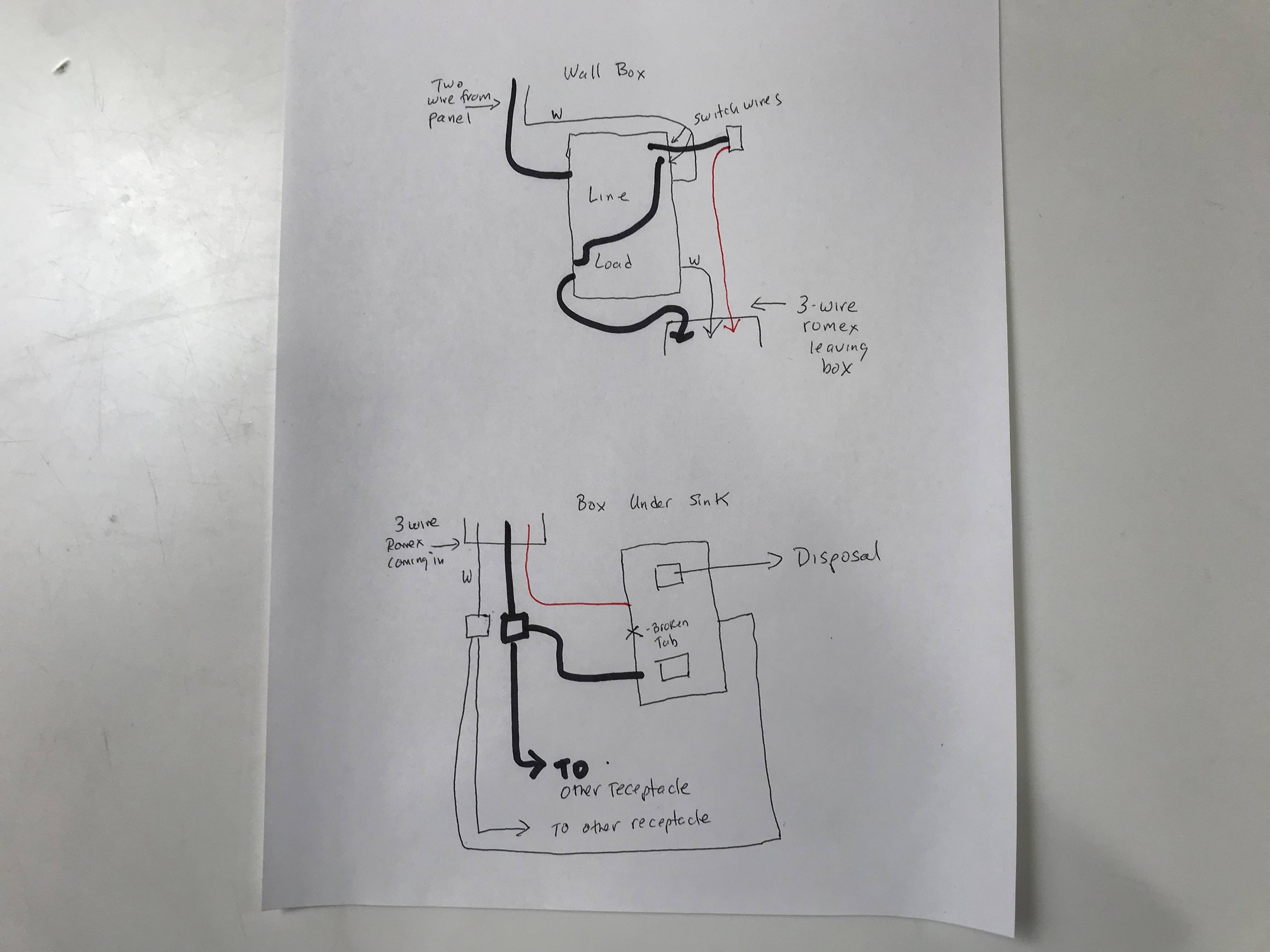 Given that you are splitting power to disposal and dishwasher, you cannot "split" and have some things be GFCI and others not. You have to put the works on GFCI, which will be annoying.

Putting the GFCI under the sink in a 2-gang box is out of the question; the reason is GFCIs must be accessible. Your options are:

Put the entire downline on the GFCI+recep+switch

...including the switch itself.

8
How do I wire a GFCI/Switch Combo?
4
How to add GFCI to a box with one outlet controlled by a switch?
0
Upgrade from outlet/switch combo to GFCI + outlet
1
Should a switch near a sink be on the load side of a GFCI outlet?
2
GFCI outlet/switch combo installation?
1
Combination switch wiring
0
Wiring a switch/outlet combo device and GFCI
1
Wiring for GFCI with 3 cables
0
Wire Line to GFCI Switch Combo to Outlet
0
Replacing a switch from switched outlet with duplex receptacle