How many wires can safely be secured in a Marrette 33 wire nut?

I need to secure four 14 AWG solid copper wires and I have black wire nuts stamped Marrette 33, which look something like in the following photo except that the spring is copper: 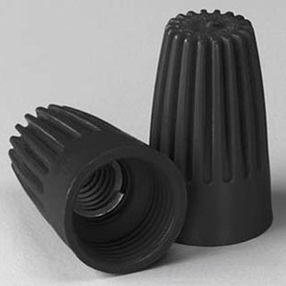 Should it be ok? I don't have the packaging, and I have not found information on the wire limits. There seems to be a new color scheme now on newer wire nuts and wing nuts.

My impression is that four 14 AWG solid wires seem really at the limit, possibly past it. The four wires seem tightly secured in that I can't pull the wire nut off. When I undid the wire nut to check on the wires, they are quite indented by the wire nut's screw, but they did not twist together. With so many wires, they also don't go in as deep, so a couple of millimetres of the stripped part of wires is still visible below the edge of the wire nut. The wires were stripped to the same length as the textured portion of the wire nut. I estimate the wires are about 1 centimetre into the wire nut screw.

For context, this is an "inherited" situation at an outlet which has four 14/2 cables coming into the box, plus a two wire light fixture mounted to it. They are the line in, continuing line to the rest of the circuit, cable to the switch for the light fixture, plus another line to an outlet next to the fixture. This is in a bathroom.

Previously, there were up to five wires (four solid copper and one stranded wire from the fixture) attached together with solder, wire nut, and electrical tape. I have reorganized slightly by replacing the cable to the adjacent (formerly "razor only") outlet with 14/2 cable since the previous one had no ground wire, and removing it from the switched circuit. Now only 4 wires are at any connection.

I have not soldered the wires, and have just used wire nuts. Especially given how packed the box is, I'm a bit uneasy about any exposed live wires, so either I'll get larger wire nuts if these ones aren't suitable, or maybe just use electrical tape with the existing setup. Aside from not having larger wire nuts handy, I'm also hesitant due to the space constraints in this box.

Here is a catalog from Thomas & Betts, the makers of Marrette connectors. Pages 14-15 cover the black high-temperature wire nuts including the Model 33.

Don't reuse old nuts, or ones of indeterminate origin.

Aim to use nuts near the middle of their working range

Not at their extremes. Black is not a new code, it's a older minority color code for a smallish nut, like most people's orange today. I use orange for binding 1-2 #18 + a #12 inside fluorescent fixtures, or 2-3 #18s; blue is ideal for the latter but orange(black) will do.

Nuts are cheap, so don't scrimp. I've searched electrician forums for what nuts they think are the best, the large majority prefer Ideal.

Not the answer you're looking for? Browse other questions tagged electrical wire connectors or ask your own question.

2
How to connect 6x12 AWG wires?
2
Attaching Three Copper Wires Together Without Using A Wire Nut?
0
How critical is it to use the correct wire colors within the same electrical outlet?
1
Ceiling box has 2 black wires and 1 white wire
2
Can I use multiple wire nut splices on a single wire in a wall can?
0
Use grounding bar in place of wire nut
0
Wire nut use safety/legality with dangling cord?
5
How to determine range of wires that can safety fit into wire nut?
1
How many wires per connector, why is a black wire connected to a white wire, how to install brace bar without attic access?