Well pump runs, but bladder tank is empty, and we have no water 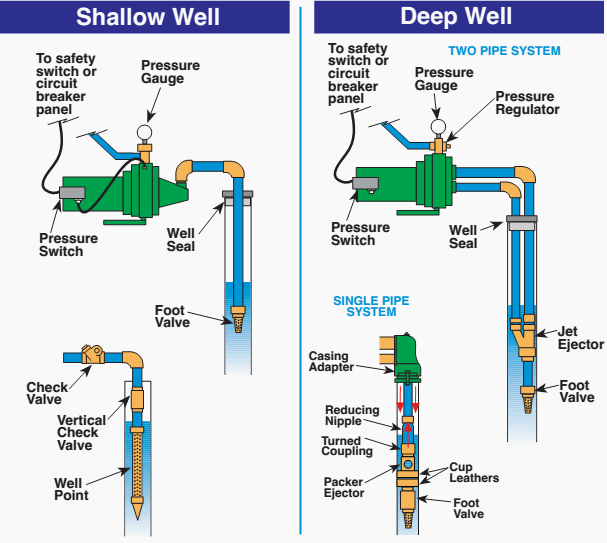 A centrifugal pump doesn't work when it's full of air. Some of them can self prime with very small differences between the pump and the water level (trash pumps, typically) Normally they are 'wet' all the time. The foot valve keeps the pipe to the pump full of water between cycles.

If the foot valve fails, then all the water in the your water system drains back into your well. (Normally you would have a check valve on the out put of the pump too, which would at least slow this down.)

A failed foot valve is a cheap fix, although a nuisance to do.

However the foot valve may just have stuck. You can try repriming the pump. There is usually a bolt on the top of the pump casing you can open and fill with water. You need to do some arithmetic to figure out how much water it will take. 1"pipe runs about 30 feet per gallon. 1.5" pipe runs about 15. So dump 5 gallons of water (go to a neighbour) and see if the problem goes away.

If the pump is still full of water, then you have another problem.

Break the output connection, and BRIEFLY run the pump. If you now have a gallon of water on the floor, then you know the pump works. If it doesn't then fix the pump. This could be simple: The impeller is no longer attached to the shaft, or it could be that the impeller has died of old age.

Note: If you have a pressure gage on the pump, then if it says you have pressure, you can skip the 'break the connection and make a mess' paragraph above.

If you have water at the pump, but not at the house, then verify that every valve between the pump and the pressure tank is actually open. YOU may not have closed them. But I can just see some 12 yr old turning off the water while a sibling is in the shower... (I know. I did this to my sister. Except I turned off the hot water.) If everything is open, then inspect the ground carefully between house and well head. If you have a wet spot, you know where to start digging.

Water at the pump may also be true with a broken impeller. Water is present, but no energy is being transferred to it by the impeller. This will show as no mess/no pressure.

You've got two lines now, and enough depth that there may multiple sections of pipe.

Submersible pump. (not shown on illustration)

These are usually trouble free. Good thing. Pain to replace. A failed foot valve doesn't affect the supply of water, except that it can put a slug of air into the system, and,in a deep well, give you some awesome water hammer. (Air pressure only will support a 30 odd column of water. So without a foot valve, the water in the pipe up to the check valve will fall back into the well, leaving a pretty good vacuum behind. When the pump next starts, you have a rapidly moving slug of water that travels up the pipe, slaming into each corner it hits.)

In both of these, you need to pull up the pipe string, and see what's wrong. Note that a deep pipe string is not light. This is something that you can do with a helper, but...

If you determine that the problem is the pump, then in the interest of family harmony, you may want to just go buy an new pump. THEN fix the old one. This will get water and the resulting clean dishes, food, clean kids, flushed toilets etc in play. If the old one is fixable, great. If not, then watch the sales and buy a spare.

(I'm paranoid: I replaced a sump pump because it was making weird noises. I thought the bearing was going. Kept it though. It sits beside the sump, with a hose clamp ready to be swapped. I also have a non-float switch pump on 60 feet of 1" line in the garage, which may buy me time to replace the sump pump. I also have a 12v pump mounted on a separate line in the sump that can keep up with the flow in all but the worst conditions when the power is out. It has a battery with a smart charger on it.)