How much weight can a 2 by 4 support in this configuration?

It is just a 4 foot by 8 foot rectangle with a center vertical piece and a center horizontal piece.

There will be a caster/wheel at each corner were the weight is transferred to. 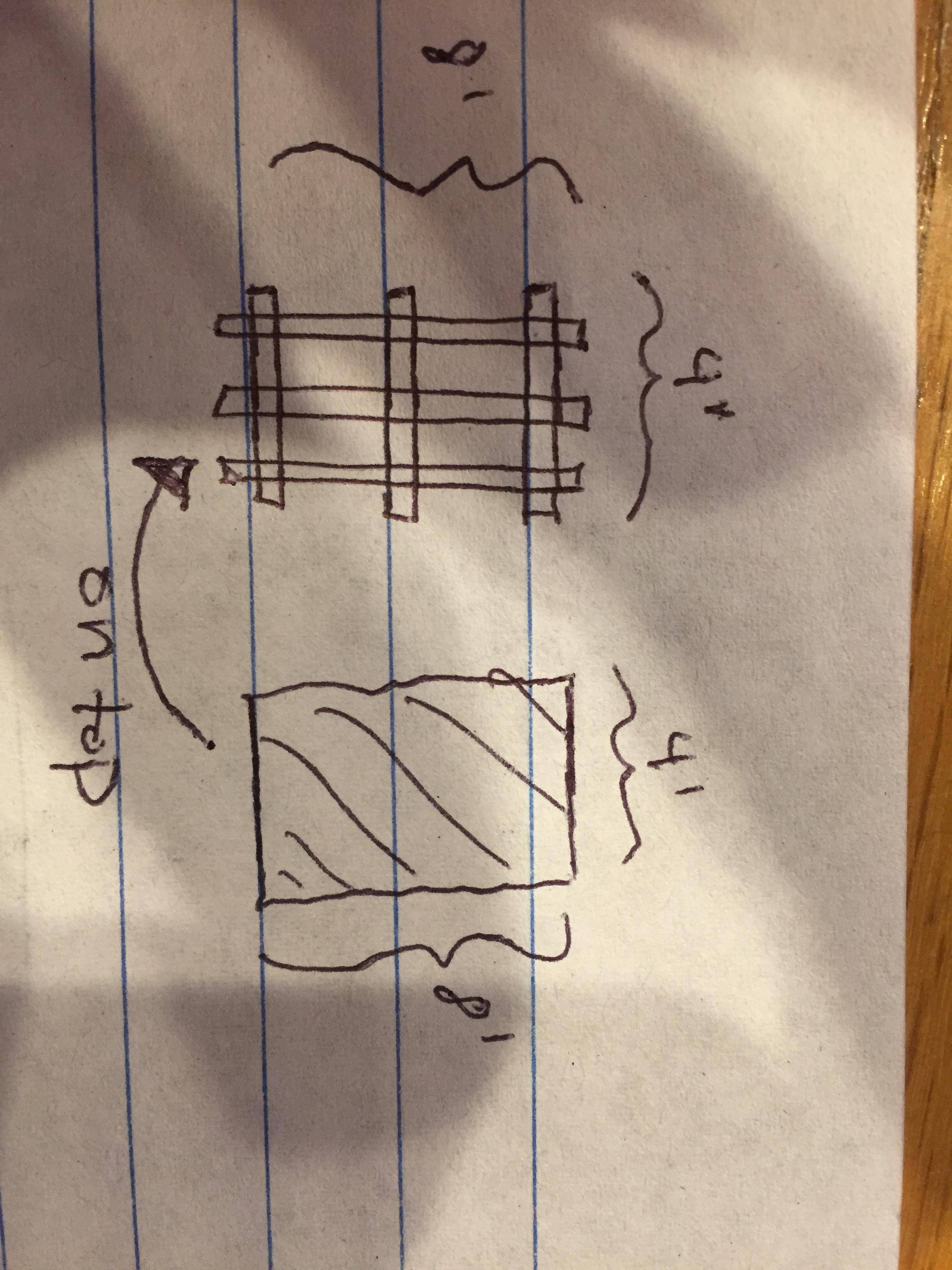 The 2x4's are also the problem. You want to support this from casters only on the corners. That means you need an 8 foot span, as well as a 4 foot cross-span, and you need to keep all this rigid so it doesn't spread and lose strength.

Half of the structure is the wood to carry the weight. The other half is to keep the first half from twisting or spreading when the weight is applied.

2 by anything isn't going to work lain flat. You'll need to stand these tall and I would go with 2x6 myself.

I would create two box structures on either side of the frame running the long way. How do I describe this?

Under load, these beams will want to twist, spread or lay over. We don't want that. So we put stuff between them. Spacers made out of more 2x6 material 8" long. In the middle we set those vertically, making a tall "H", except we need more than one cross-spacer. Near the ends, different deal. We lay the spacers horizontally - and this is what we attach the casters to. We can position these spacers up or down as needed to set the desired height for the platform. Got it? We build two of these.

Now we get two 4' 2x6's. These will become the end caps. Lay the box structures parallel so their outsides are 4' apart, and attach them to the end caps.

That leaves a big, thin 2 foot by 8 foot rectangle in the middle with no support whatsoever. Another 2x6 joist would suffice there, or even a 2x4 if weight is a worry.

Now the framing is done.

The top plywood is very important. It's not just a hole filler. It also provides structural stiffness to keep the whole thing from skewing or spreading. So 1/4" will certainly not cut it. Given that we now have joist support every 12" or so, 1/2" will probably do.

The 2x4s are not the problem. The plywood is the problem. I would go for a minimum 1/2" plywood, possibly even 3/4". That will make it a lot heavier - but also a lot sturdier. Since you are putting it on casters, the weight of the plywood should not be a big deal but also make sure the casters are rated for the total weight (1,000 lbs+).

Note: Bending means how much it can support if you don't care how much it will sag. L/360 - L/180 are measure of stiffness used if you were going to use it as flooring vs. roofing.

@isherwood is correct in saying if the load is structural enough to be able to transmit the weight directly to the 2x4s without bearing on the plywood (e.g. a cabinet), then all the plywood is doing is holding the 2x4s square.

However, I would still use 5/8" just in case anybody stepped on this thing.

BTW going to 2x6s will not help in this situation.

Also I believe you will need six casters. one at each end of the bottom 2x4s. 8' is a long way for three 2x4s to span without sagging a lot.

I would use two 4x4s in the long dimension, or maybe 2x6s if you can stand the height. The 4x4s have more width and will be easier to attach casters to.

Definitely not 1/4" plywood, it has no structural strength at all. It is used for cabinet backs and similar applications. You want at least 5/8".

Unless your floor is really smooth, there will be a lot of stress between the lower and upper structural members when you roll it and hit a bump. They need to be connected very well. 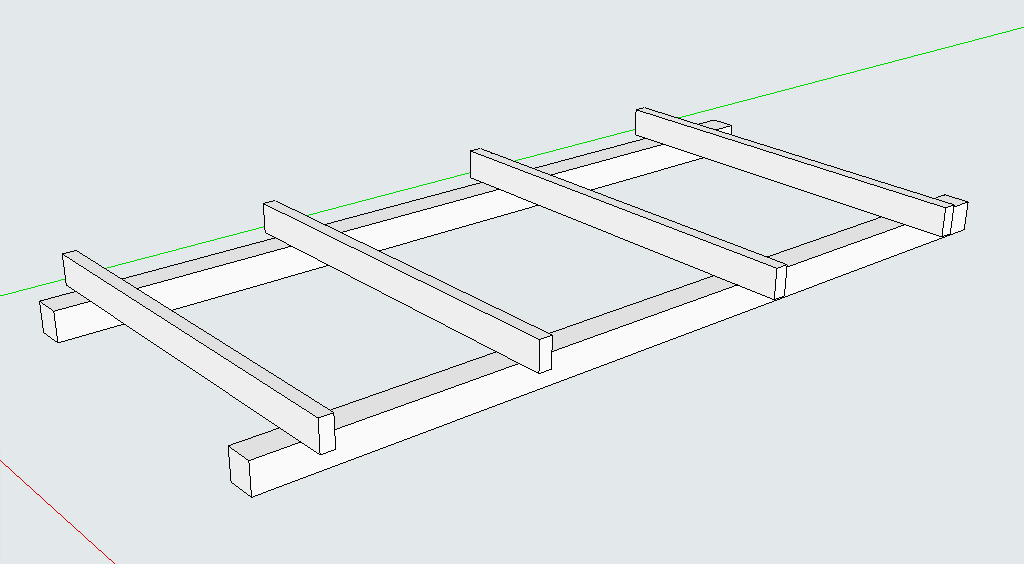 Edit: calculation for one 2x6 flat. I wouldn't want much more than 1 inch of deflection, you can decide how much is acceptable to you. I am an Electrical Engineer, not a structural engineer, never risk your life based on what I say. My qualifications (besides general DIY): I got an "A" in Statics 40 years ago. I strongly recommend measuring the deflection yourself as others have said in the other question. 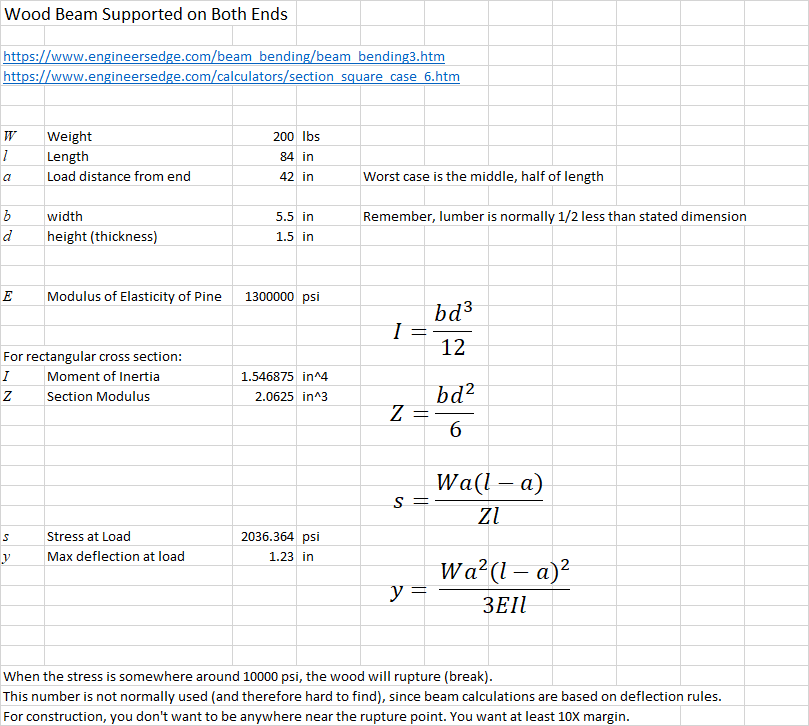 Not the answer you're looking for? Browse other questions tagged woodworking lumber or ask your own question.

-1
How much weight will this structure hold?

2
How can wood be bent this way?
5
What is this type of traditional adjustable shelf support called?
8
How do I understand this description of lumber?
0
How do I support shelving
2
Will 2x6 cedar be ok for monkey bar rails?
1
Can I use LVL 2x4 outdoors (pergola roof)
1
How can I support the bottom of a long, open cabinet?
1
Will a horizontal 2x4 support my body weight?
1
How far can a 2x4 or maybe 2x6 support over a 10' span?