Is there a code-compliant way to label a wire where the conductors are not wired in the expected way?

This might be an X/Y problem, so if there is a better solution, I'm all ears. I have a 3-gang electrical box in my basement that is already overcrowded. It has

I intend to introduce three more wires, and cut out 1 as I'm replacing the basement lights with 4 dimmable zones. I have open access to the wall (the other side is the utility room). I know that the simplest solution would be to move the doorbell and smoke detector wires to an intermediary junction box, but that only gets rid of two wires and I'm still planning on adding three more. I'd like to if possible have a carrier(s) between the two junction boxes for the light zones as well

I'm thinking the below (stupidly complicated) diagram is the easiest way to get it all done with the least space used in the actual switch box if I introduce a secondary junction box above it. Please note, in the below diagram, common is indicated by blue wires (it's hard to show white wires on a white background).

I'll have three sets of wires running between the two junction boxes, 1 to carry 120VAC, the other two to individual dimmer circuits plus ground. My main concern is that I'll be using white wire to carry a hot voltage between the two boxes. Is there any way I can label this to keep it to code, or do I have to run all four light-zone wires to the lower box? For code reference, I'm in the US, kansas to be exact.

Edit: As per the diagram, tan boxes are shielded NM wire, grey boxes are wire nuts/splices, the two large black boxes are the electrical junction boxes (blue plastic), and the lower large box also shows how the switches would be wired. 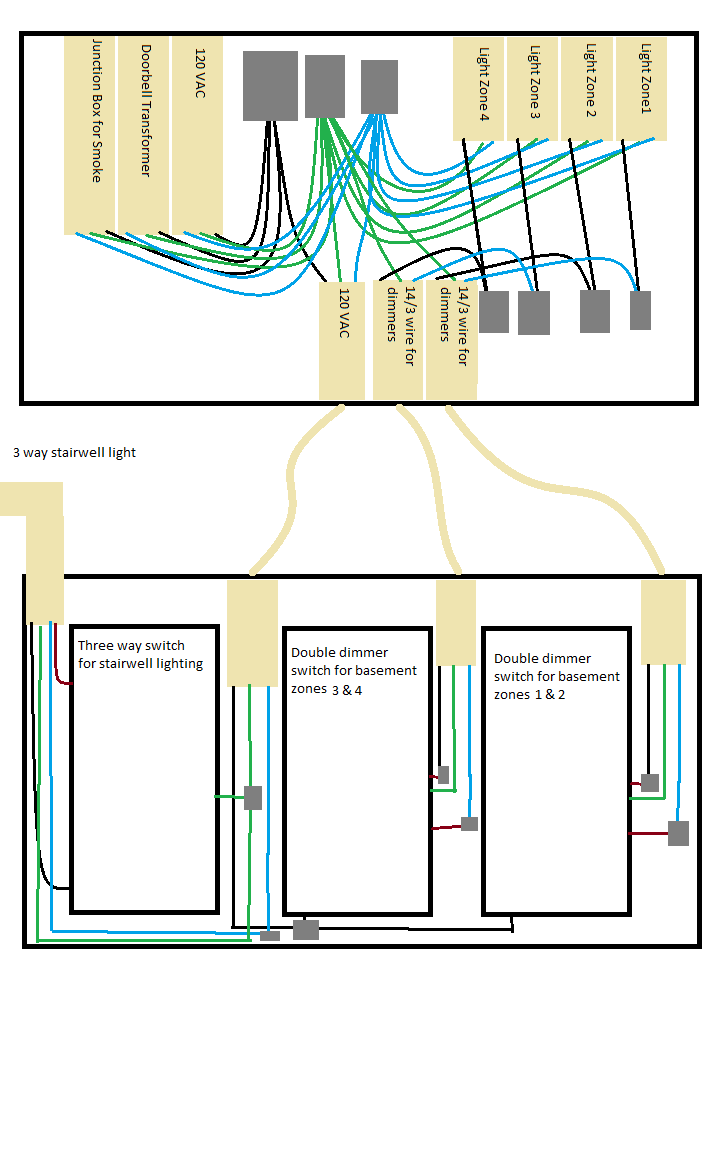 Nope, you can't loop power out one cable and back the other.

The rule is that currents must sum up to zero (be equal and opposite) amongst all wires in each cable or conduit.

That means your idea of 3 cables - one for hot+neutral and two more for four switched lines - is a non-starter. You would need ONE cable that is /6. Or alternately, conduit and individual THHN wires. (No, you can not strip NM's sheath and use the individual wires, unless they are marked, and they're not.)

As such, the three cables are useles, and this has an effect on the landscape.

You can't eliminate the stairwell switch

Code absolutely requires stairwell switches at top and bottom. So that one needs to stay. The alternatives are motion sensors that are positioned correctly (hard), or lights left on 24x7.

Go back to your original plan

Look at your plastic junction box, they are pretty big so good shot.

If that doesn't work, you'll need to change to the conduit wiring system so you can splice all those neutrals in a seeparate third box. But the problem is those plastic boxes don't have entry points for conduit.

Your better bet would be to change the plastic box for a metal one, and let the switches ground through their yokes. All grounds are free, but that doesn't mean they don't take practical space. If your metal switch box then fed to a metal junction box nearby with metal conduit between, all that conduit becomes the ground, and the NM cables only nee to tie to ground wherever they enter the metal piping system.

All of the current-carrying conductors in any wire need to have their currents algebraically sum to 0, or in other words, from the viewpoint of any given cable exit, current out needs to equal current in. As a result, using one cable to carry hot + neutral and the others to carry only switched hots won't work, at all. However, there are two options still available here. First, you can partition neutral in the ceiling box, which lets you use actual 14/3 NM (the cables you are saying are "14/3" are actually 14/2 as the ground wire doesn't get counted) for the dimmer runs, but requires more care in wiring to avoid violating the aforementioned rule (a consequence of NEC 300.3(B) and NEC 310.10(H). The other option would involve changing to individual stranded THHN wires in a type of conduit known as ENT (Electrical Nonmetallic Tubing, aka "smurf tube"); this keeps everything together, and makes the wiring easier overall, but is something that appears to be a new skill for the OP to learn.

In order to use cables here, you need to have power from the dimmer zones return back to the switch box in the same cables that carried it out from the switch box. In practice, this means that you use actual 14/3 W/G NM for the two dimmer leg runs, with the red and black wires as the dimmed hots for each zone and the white wire as the neutral for that pair of zones, branched in the switch box. In the ceiling box, the hots wire as normal, but the neutrals for each zone-pair get flagged with white tape to distinguish them, and more importantly do not get bundled with the main neutral that corresponds to the always-hot coming into the box. As a result, the ceiling box gets divided by an invisible "firewall" between the always-hot and its corresponding neutral, and each zone-pair and its corresponding neutral, only ever penetrated by ground wires.

(As an aside, while this is theoretically possible to do with switch loops, I'm not proposing this because it'd require 14/4 cable aka more box fill, and would not mitigate the hazard of cross-coupled neutrals, simply moving it to the switch box instead.)

The other option here is to ditch the NM cables between the switch and junction boxes entirely in favor of using conduit, as Harper mentions. While there are a variety of conduit systems out there, with different advantages and disadvantages, the one that makes most sense in a residential environment where plastic boxes are in play is called Electrical Nonmetallic Tubing, or ENT for short. ENT (also known as "smurf tube") can be installed without special tooling, fished through walls much like a cable can, and is versatile enough to be used for mains wiring or data cabling, albeit not both at once. Furthermore, a 1/2" ENT can hold 11 14AWG THHN wires, which is enough for just about any residential wiring job.

In your case, once you run the ENT between the boxes, you will need to pull 7 wires through it -- an always-hot, a neutral, a ground, and the four switched hots, which you can make any color you wish other than white, grey, or green, as those colors are reserved by the NEC for neutral, neutral, and ground, respectively. I would probably use yellow, red, blue, and either pink or violet, unless not distinguishing them isn't an issue, in which case you simply use all of the same color, such as red. The nice thing about this is that you can use stranded THHN wire in conduit, which makes the installation quite a bit easier.

Not the answer you're looking for? Browse other questions tagged electrical code-compliance dimmer-switch multiway-switch or ask your own question.

6
How do I wire these dimmer switches? The current wiring is crazy
1
Replaced Outlet and Switch, Now Light Won't Turn Off
0
How do I wire up my ceiling fan?
2
Ceiling junction box has 6 wires?
3
What is the correct way to wire a 3 way switch where power comes into the middle switch?
1
Can 14/3 wire, with all three conductors hot, be the only cable in a switch box?
2
Replacing 3-way Dimmer with Smart Dimmer