I've read a lot of variants of this question but I still haven't quite figured it out. I'm adding a 3rd bathroom to my house and I want to make sure I've got enough water flow to run 2-3 showers and an appliance (e.g. washer) at once, if necessary, without a problem.

My best guess at what would provide optimum flow:

Other details, if relevant:

I have a couple of questions:

My basement is currently unfinished, and the 3rd bathroom would be in the finished basement. I have (pretty) easy access to replace this line right now, and it would become harder later - it's going to have to be cut up anyway to feed the new fixtures. .

Three showers running simultaneously with a hypothetical flow of 2.5 GPM plus an unknown appliance sum to about 10 GPM. To explore the effect of up-sizing the PRV I consulted the spec sheet for an arbitrary PRV -- in this case, the Watts LF25AUB-Z3. It included a graph showing pressure drop vs flow curves for several sizes of valve. I've drawn lines on the chart to show the pressure drop incurred at 10 GPM flow through the 3/4" and 1" valves. It looks like about 12 psi for the 3/4" and 9 psi for the 1". 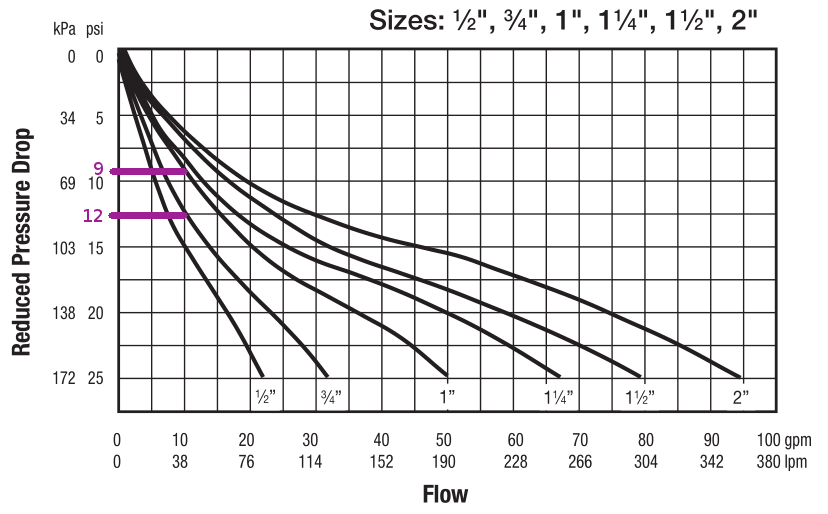 Of course there's pressure drop in pipe as well. There's a nice set of charts and graphs at Engineering Toolbox to help estimate this. Since I don't know what type of copper tube is used in the line from your meter into the house, nor how long it is, I've assumed/estimated using the numbers for Type L at a length of 60 feet. The pressure drop in 3/4" Type L at 60 feet for 10 GPM flow would be about 6 psi. If the line were increased to 1" instead the drop would be 1.7 psi.

There's going to be some pressure drop in the meter too, but I'm not going to try to track down a meter to hold up as an example. It's probably reasonable to say that if the static pressure is 80 psi and the PRV target is 50 psi then you've got a pressure loss budget of 30, maybe 6 is spent on the tube and there's 24 psi left to lose in the meter. It'll likely be lower than that. If the supply pressure is high enough it doesn't matter whether the drop happens in the plumbing or in the PRV. In other words, assuming there's no damage to the buried tube outside, replacing it with larger tube may not make a difference. Up-sizing only the pipe inside the house feeding the PRV definitely won't be worthwhile. Up-sizing the pipe downstream of the PRV may be helpful since it's on the low pressure side of the system, but the length of the pipe on that side isn't tremendous anyway.

The whole exercise may be somewhat moot -- how large is that water heater? The 10 GPM fed to the showers is going to be a hot/cold blend, so maybe 8 GPM is drawn from the water heater. If it's a 40 gallon tank the water will have been completely flushed in 5 minutes but people in the shower will notice it going cold sooner than that. I imagine hot water capacity will become a problem before pressure drop does.

An update to the question clarifies that there's a Rinnai instant hot water heater. I happen to have an earlier generation of Rinnai heater (RL75i or some such) which I've been running for about 11 years (love that thing!). The way mine works, and maybe yours too, is that it first modulates the gas valve to control water temperature. If it can't achieve enough temperature rise with the gas fully on then it restricts water flow as necessary.

Supposing your model works like mine this is important to note. Even if you had 2" pipe feeding the water heater it'll limit the flow to ensure that what water you do get is at the temperature you've set. That'll feel like a pressure drop in the shower but it may not be caused by the PRV or pipe sizing. If you're willing to adjust the heater set point, though, this can be put to the shower user's advantage.

Ironically, your current 130 F setting actually makes this more likely. I note that the Rinnai user guide says "Minimum Water Pressure: 50 PSI (Recommended 60-80 PSI for maximum performance)" on page 47. On page 49 there are a pair of graphs; one shows flow (GPM) vs temperature rise. If your incoming water is 50 F and the setting is 130 F then you're asking for 80 F rise and RUC98i will yield just 4.8 GPM. However, if you set the heater to 106 F and thus need only 56 F rise it'll give you about 6.8 GPM. Blending the 130 F water with cold water balances the score somewhat, but I'll wager you'd still get more water to the shower with the heater set to 106 F. 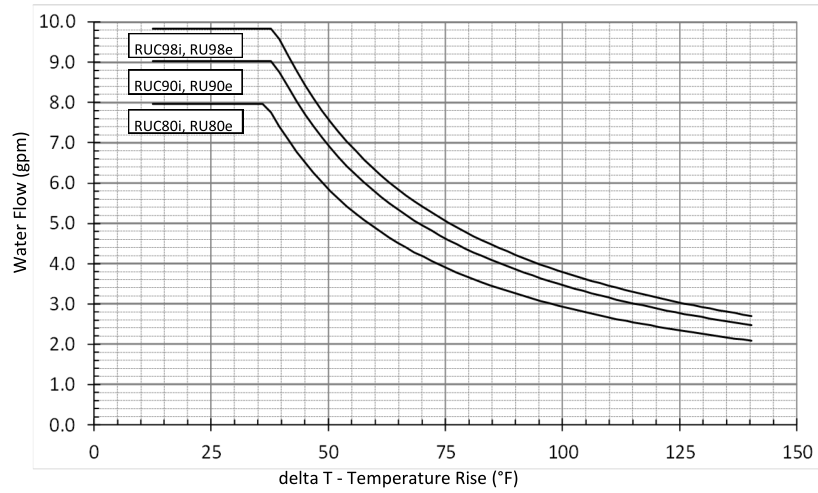 Rinnai offers wired remote controls and I installed one beside my shower a few years ago. I use it to set the heater for my preferred temperature while showering and then turn on only the hot water tap in the shower. The result is that even if another person starts another shower, somebody turns on the clothes or dish washer, or a toilet gets flushed my shower temperature remains steady. The pressure at my shower head may fluctuate but the water temperature holds steady and my shower goes on blissfully.

I've just discovered that Rinnai also have introduced a wireless controller option and smart phone app (of course they have!). Find more info at their web site.

Standard 3/4 line handles 10 gpm reasonably well. In your case you want the PRV as close to the water tank as possible. It doesn't matter really if you have a 3/4" PRV or a 1" PRV, the bulk of the pressure drop will be across the PRV valve, unless the valve itself isn't rated for that flow rate. Given Greg Hill's excellent answer with charts, you would only lose 12 psi at 10gpm over the valve. So unless 10 gpm results in more than 18 psi drop from the meter to PRV, you are good.

As you draw more water, the pressure drop on the Meter to PRV increases. The prv then doesn't need to reduce the pressure as much, and so the drop across it decreases.

That said: A 30 gallon tank at 2.5 gpm is 12 minutes shower time. Split 3 ways works out to 4 minute showers. Few people are this quick. Ok, this is lengthened by the hot/cold ratio. Using my local numbers, my supply temp is 50F, and my tank is set to 130 (dangerous, but we don't have kids or old people, and it's a long run from the tank to the shower) To get 100 degree water in the shower with 120 degree water in the hot tap by the time it gets to the shower requires that my cold tap supplies about 20% of the volume my hot tap does.

Applying this to your case, would turn 4 minute showers into 4:48 showers.

You need an auxilary water tank.

This doesn't have to be an extra heater, unless you use a lot of hot water. Just an insulated tank with big pipes between it and the HW heater, connecting top to top and bottom to bottom, with the supply line running to the bottom of the auxilary tank. In use, hot water is drawn from the top of both tanks, and cold water enters the bottom of both tanks. The main heater recovers, but hot water being less dense will start to flow over into the auxilary tank. The net result is a much longer full recovery time, but when you need a lot of hot water it's there.

To complete my story with this, I ended up replacing the probably-40-something-year-old PRV on my water service entrance which made a huge difference and I suspect was the real reason I was having flow issues. I took it apart for fun, man, was that thing gross!

Before, opening the shower spout would drop the pressure from ~60psi to ~40psi. With the new PRV, it only drops to ~55psi. I ended up going with a 1" Zurn 70XL to achieve these results - which does line up pretty well with Greg's answer above, though it's a different brand. Installed a pressure gauge before and after the PRV using brass tees because I'm a nerd :)

While I was at it, I upsized the 3/4" PEX line to 1" up to a tee between my water heater and the rest of the house (kitchen, master bath) because PEX is cheap and the original plumber put a bunch of unnecessary fittings, like elbows, which I was convinced were restricting flow.

I'm not sure this made a big difference but made me feel better about adding a 3rd bathroom. Plus, I got a good eBay deal on a LeakSmart device to turn off the water remotely - and it happened to be 1".

Bonus advice: pipe dope plus PTFE tape is the way to go. Nearly the whole thing leaked with ~5 turns of only PTFE tape on each joint, and it was a lot of threaded joints...

1
How to determine if a Water Pressure Reducing Valve (PRV) is working properly
3
Chemical Smell After Tankless Water Heater Install
1
130 PSI- Irrigation system, water line in house
3
Would increasing pipe size just after the meter give better flow without increasing pressure too much?
2
Why would turning on/off hot water when the toilet is flushing cause the tankless pressure relief valve to release water?
0
Home water pressure consistently exceeds 150 PSI
1
How can I mix tank and tankless hot water to feed my bathroom?
1
Plumbing fixtures starve but water pressure 50 psi