Can I extend sump pump outlet with elbow outside the house?

My house has a sump pump that rarely turns on (maybe once a year).

The sketch below shows the current outlet setup (blue line). The outlet at the house is only about 8" above grade. In winter, when there is snow on the ground, the final exit point can be buried in snow and I am not confident the pump would work properly if that's when it needed to turn on.

To address this, I would like to raise the final outlet from current 2" to about 18" (red line on sketch). Can I safely achieve this by: 1) cutting the current outlet, 2) adding an elbow 3) running a short vertical?

I live in Toronto, where winters get well below freezing, so my primary concern is standing water that will freeze the pipe solid.

This thread seems to describe a similar situation, but I think the idea there was the put the vertical riser at the end of the outlet (in the ditch area). It mentions that freezing concerns can be addressed by drilling a small drain hole in the elbow. Is that right?

For my proposed setup, even though it's a small hole, I am not sure it's a great idea to drain anything at the foundation line. So maybe I'd put the elbow at the front of the porch instead? But then I'd have the 4' horizontal pipe effectively need to drain out of that small hole?

I guess I am asking for some advice on the best way to deal with this situation. Ideally without having to relocate the outlet hole in the house foundation. 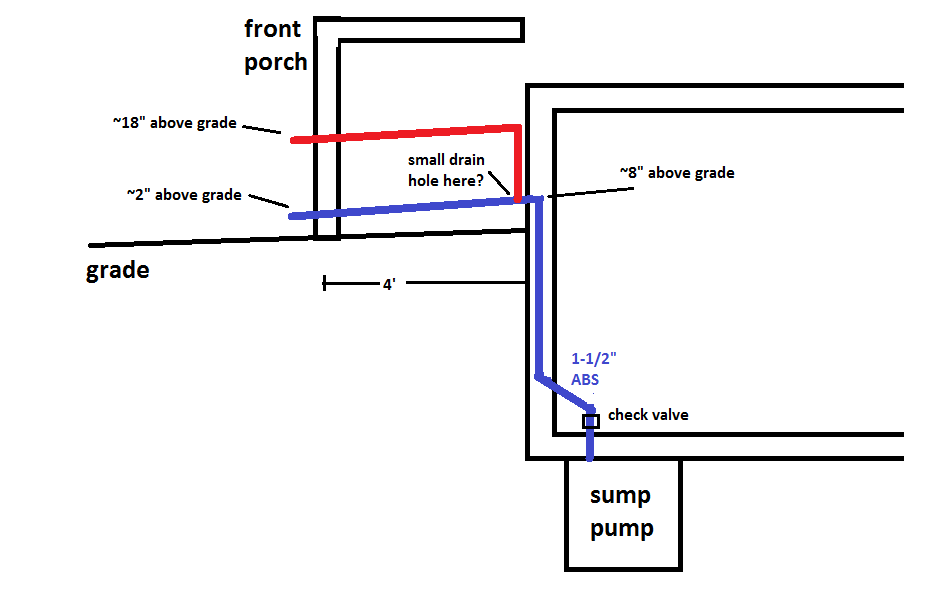 Yes, your plan would work providing your sump pump can handle the extra head pressure, which it should.

Have you ever actually had a problem with this or is it the last thing to do on your "To do list"? I'm asking because I grew up in a house in the Midwest with the same layout as you have and we never worried about it. If the outlet was covered with snow and the sump pump actually needed to run, the water being ejected would be warm enough to melt any snow around the outlet pipe.

You could pick up a few inches by re sloping the horizontal pipe under the porch. You've got 6" of slope over a 4' distance, you could raise the utlet from 2" to 5".... Good luck

Not the answer you're looking for? Browse other questions tagged drainage sump-pump freezing or ask your own question.

1
Can I extend my sump pump outlet?

1
Can I extend my sump pump outlet?
3
How to extend Sump Pump discharge pipe from house
0
Discharge back-up sump above ground?
2
Making sense of an existing sump system
1
basement sump pump water level above drain tile
1
Is there such a thing as a check valve with a manual release?
2
Should my sump pail be perforated?
0
Sump pump: OK to reduce 1.5" to 3/4"?
3
Sump discharge freezing