Is there a safe way to check for a short in a motor (garbage disposal)?

Quick version: Is there a way to reliably identify a short in a motor, such as a garbage disposal? Such as measuring resistance?

Less quick version: My first thought was that since there shouldn't be any switches inside, and making the completely unsupported assumption, that there isn't any transformers or inverters, I thought:

So I measured the resistance across the motor Hoping for 8 to 10 ohms, which is where it seemed it should be. Instead, I got 1.8. Hardly open, but much lower than expected. If my theory was right that would be a 67A draw. Then I remembered that resistance was linearly temperature dependant and maybe I could justify the 1.8 ohms like this:

Ultimately, math failed me. I'm glad I wasn't a physics major. Assuming the coefficient for copper I found on the internet of 0.007074 was correct, and plugging eq 2 into eq 1, If that motor is supposed to draw 15 amps, The temperature at the stator would have to be somewhere around 628 degrees celsius above room temperature. So I'm just going to assume that doesn't work. Math has failed me.

Heres the back story. I bought this really nice garbage disposal. Stupid expensive because it's a 1.5hp motor. I was tired of my wife shoving remains of thanksgiving dinner down the drain and destroying the plumbing. It worked great for about a year, then we decided to remodel. Since the goal was to remodel in stages, so that for the most part the kitchen would stay in working order, and I knew I would have to take apart the sink more than once, I un-hard wired the garbage disposal. Yes, I know this is illegal in most municipalities. Yes I know there are many good reasons for not doing this but, well, I did it anyway. At least I'm better with electricity than math. In my defense, I have seem many professionally wired homes that do this.

Regardless, some moron stocking the shelves at Home Depot, put one of those stupid sideways 20A plugs that nobody uses in the wrong spot, and I accidentally bought it. As a result, for a time, I had a working sink with a semi-working drain. While I was at work, My wife, doing her thing as usual, crammed a bunch of food in the garbage disposal, and ran an extension cord from the plug I installed to a wall outlet. Big surprise, it blew a breaker. When I get home I tried a more controlled experiment, thinking that the long extension cord or the arc during the act of plugging it in could have been the problem. I killed the breaker, ran a heavy gauge, shorter extension cord to an isolated outlet on a 20A breaker. After all connections were made I flipped the breaker. It blew again.

I removed the garbage disposal and checked the wiring. After checking the resistance, I pulled out the wires and inspected for damage. Everything looks good. Not sure what to try next.

Installed it last night after cleaning it out and it ran without issue. It must have either been a blocked rotor or excessive draw due to the cable.

There's two features of these motors that change the current from what you'd expect with a DC measurement of the resistance.

Firstly, the windings are inductive, so that they offer additional 'resistance' (properly called reactance) which when coupled with the resistance presents "impedance" to the current. With sinusoidal voltage, Ohm's law does work for the magnitudes of the voltage = current x impedance equation, though the current and voltage end up out of phase, but that's not important here.

The upshot of this is that the current the motor draws is at a maximum when it is stalled, and falls as the motor accelerates up to its normal running speed. Put additional load on the motor, and the current will stay higher for longer as the acceleration is slowed.

To allow for this, the breaker has a number of curves that tailor its behavior to the current drawn. 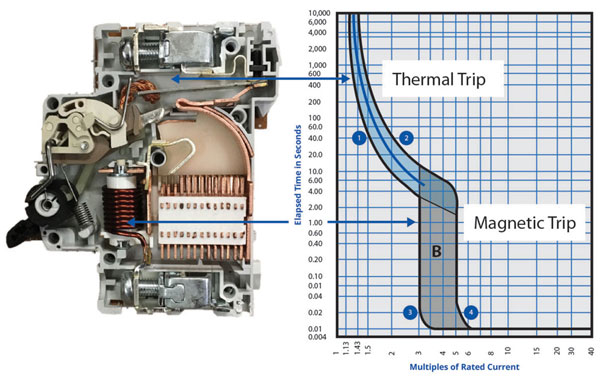 The magnetic trip is what happens instantaneously, at several times the normal rated current, and there's a thermal trip that will trip the breaker in a defined time when there's an overload of lower level, but for longer. For a motor, you could envision that the that the current starts at the lower axis somewhere near point 3 as you turn it on, and then heads off northwest as it accelerates, not getting near to the trip values. There are different curves available for breakers, with ones that are more tolerant for large motors, so you should check that the breaker on the circuit you are using is the same type as the circuit it was originally wired to. If it's tripping near instantaneously, that may be your issue.

It may well be that the motor just doesn't have enough torque to start up with the stuff loaded into it, but that'd show up with the breaker tripping a few seconds later (if it's an appropriate rating) as the stall current should not be tripping the magnetic trip.

Your equation (Ohm's Law) is correct but you are failing to take into account that the formula you've written is for DC STEADY-STATE conditions. An INDUCTION MOTOR, which is undoubtedly what you have in your disposal, runs on AC and doesn't follow this limited-case equation.

An induction motor, you can read theory here:

will look like a low-resistance load at DC. That, of course, is what you're seeing. But it's not just a straight wire but rather an inductor so if you apply 60HZ AC to it, you now must account for the DELTA V (i.e. rate of change of the input voltage) to calculate the IMPEDANCE of the load. Impedance is the actual "resistance" of a complex load to the input power. Calculating the of an induction motor is fairly complicated since you must include the wiring resistance, the inductance, and as the motor moves, the "back EMF" that it generates.

Long story short: If it blows the circuit breaker when you switch it on, you have a short or other problem in the motor. If it just hums, you probably have a blocked rotor, and if it doesn't nothing, you may have an open in one of the windings.

Yes, those ARE used and indicate that this device should be on its own dedicated 20A circuit. Based on your description, however:

doing her thing as usual, crammed a bunch of food in the garbage disposal, and ran an extension cord from the plug I installed to a wall outlet. Big surprise, it blew a breaker.

You may have damaged the motor by loading it down and then running it with a poor source of power, specifically the extension cord.

Clear the blockage out of it, see if it has a keyway on the bottom of the unit where you can turn the shaft with a hex wrench, and see if you can get it going again.

If not, time for a new one. Please either get one that is rated for the power you have or install a proper outlet and circuit for the unit's requirements.

Not the answer you're looking for? Browse other questions tagged electrical wiring repair electric-motor or ask your own question.

0
Why has my garbage disposal started tripping the breaker every time?
0
Why do I detect voltage on my ground of surge protector?
1
Fridge popping breaker when plugged into garage outlets
0
How do I Test a Dishwasher Pump Motor
4
Garbage Disposal Electrical Connection
2
5hp 230v single phase motor popping 30amp breaker
0
15A air compressor blowing 15A breaker
0
Garbage disposal stalled, water backed up
0
Flickering light at outlet tester