Why did my coat of spray paint crack along a profile line?

I am spray painting my cabinet doors.

The first and second coats are good. However, I see cracking on the edges of each door after third coat. The surface is good, quite smooth. 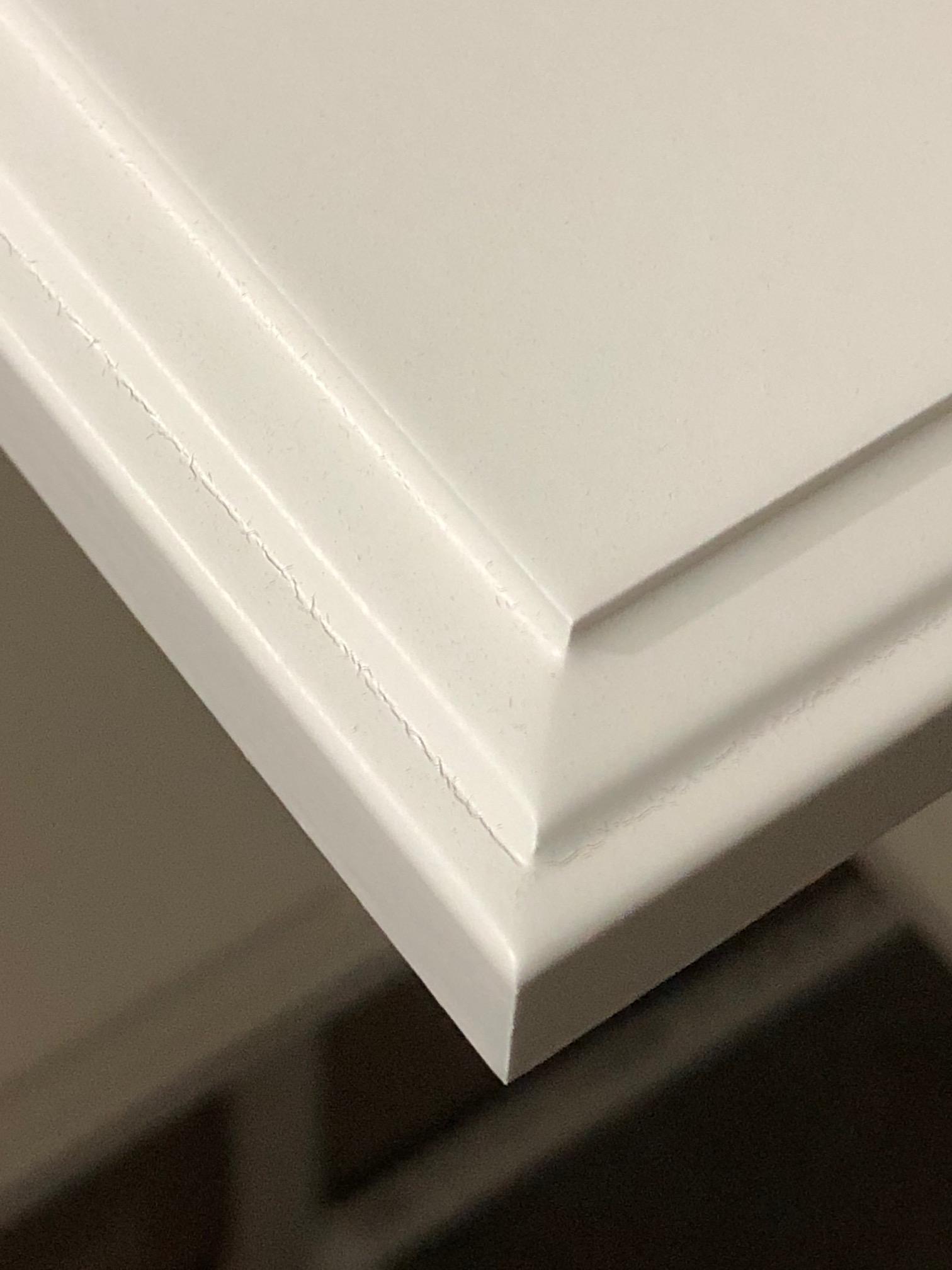 Do you know what could be the problem?

My paint expired a little bit. The humidity is 74%. But I didn't see same problem when the first and second coats were applied.

I am using GRACO HANDHELD sprayer with 414 tip. Paint is water based.

You laid it on too thick, because nooks are tricky to paint for several reasons.

This was greatly exacerbated by not using primer.

Whenever the paint industry claims something, they mean it in a certain context. For instance I see a lot of brushes and rollers "for all paints". Yeah, they melt and come to pieces when I roll a marine LPU, because what they really meant was "All paints sold in Home Depot (except the garage floor epoxy)".

When they say "self-priming" what they really mean is "On drywall or pre-painted off-white surfaces" and it's a brag about their coverage.

An important job of primer on raw wood is to block moisture and oils. It might have been moisture pushing out the end grain, but probably not. Mineral-based primers made for wood do a good job of this.

You didn't mention this, but I bet the whole reason you came back for a third coat is the coverage was poor. The maple was printing through the paint, either from color, absorption or texture. This falls into two areas that are primer's job too:

The next coat of a paint can partially reactivate the last coat; that's how it bonds (without having to scuff-sand for a purely mechanical bond). I'm not sure whether your third coat reactivated the first two, or you were just hitting the third coat extra hard to avoid a fourth, but the stack ended up too thick to dry without cracking.

By splitting the "coverage" task across two totally different chemicals, you reduce that layer thickness - you are applying two thin paint systems instead of one thick one. It also helps if the primer is a different chemistry, e.g. 2-part epoxy or alkyd, and that even helps the primer do a better job.

But I would say, next time, prime with an aklyd wood primer, until the surface is monochrome and as you like. Then you will use less paint and you won't have defects arising from thickness.

Might be caused by the second layer shrinking beneath the third layer because it hadn't fully dried. In high humidity conditions, I generally increase the recommended drying time between recoats by 25%, just to be safe.

Alternatively, if the backside of the door has been stripped and hasn't been resealed, the door itself may be expanding slightly due to the humidity.

I haven't actually had this happen before on something like a cabinet door, so these are just guesses based on experience with painting outdoors.

Not the answer you're looking for? Browse other questions tagged painting paint spraypainting or ask your own question.

6
Is it necessary to sand before the last coat of oil paint?
2
Small chunks from brush in paint
6
Drywall Painting: Do I need to keep priming here?
2
Paint adherence on fiberglass door. Does it need time to 'cure'? Can I top-coat it?
2
Why don't (all) professional painters use paint sprayers?
4
Microbubbles on kitchen cabinet doors using HVLP sprayer, how to fix the issue?
1
How to touch up surface painted with airless sprayer