How to support 4x4 posts on cement driveway

I'm designing some outdoor bike storage as a free-standing shed. It will go against a house on an existing cement driveway. We're renting, so I can't drill into the driveway or do any other permanent modifications.

Here's my current design for context: 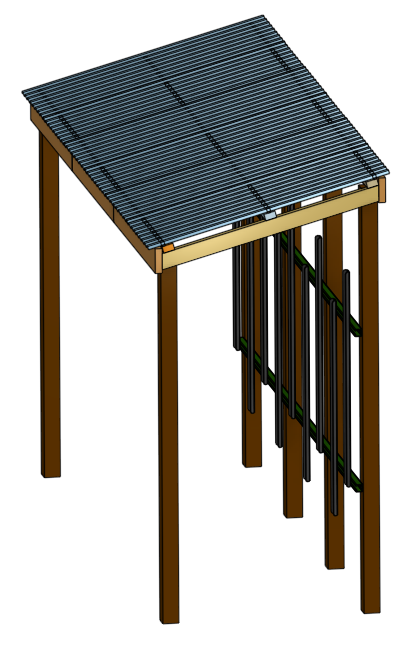 Link to the public design in OnShape: Bike Storage Shed

This structure is in coastal northern California, so no snow load on the roof but occasional heavy rains.

The structure as shown is not done being designed yet; there will be framed out T1-11 siding on the ends and diagonal braces in the back to provide torsional stability.

It doesn't seem right to just have the 4x4 posts rest directly on the cement driveway. What is the best way to support the posts? I was considering:

Any thoughts on the most robust way to interface the posts to the driveway?

"Any thoughts on the most robust way to anchor the posts?"

You said you are renting and can not anchor.

Take some five gallon buckets and mix up some cement, fill the buckets with the cement and put an eye bolt in so it stick out of the top. Put a nut and washer on the threaded part of the eye bolt that will be in the concrete to prevent it from being pulled out. Now you can place these on the sides of the structure and use rope or ratchet straps to secure the structure down to protect the wind from taking it for a sail.

Strong winds or heavy snow will destroy that structure as you currently have it planned (if it would even be able to support it's own roof).

Imagine that this structure is not a structure, but a stool - if you sit on a stool where the legs are not tied together somewhere other than the top, the legs of the stool will want to push outward at the bottom, and you'll wind up on the floor. Similarly if you were to drag it around, some legs will buckle in and others will buckle out, and the whole thing will want to tip over or wind up twisting and breaking apart. You need to add horizontal cross-braces at least halfway down, maybe diagonal ones too.

As far as anchoring it, earth anchors may be an option - there's two styles I'm aware of, one that twists in and the "duckbill anchor" that locks in place when you tug up on it. I've never used the duckbill anchor, but twist-in anchors are pretty easy to find and use (I mean they're hard work in some soil, but not hard thinking). Just don't use the cheap ones for dog leashes, they're not as good. They're often used to anchor mobile homes and playground equipment, and removable by twisting in the opposite direction.

As for keeping the posts off the concrete - this would be ideal, but for a simple storage shed made of pressure treated, I wouldn't be too concerned about that - spray the bottom with leakseal if you're worried. I say this because it takes decades for PT 4*4s to rot in unprotected ground contact. If you expect it'll be around for longer than that, maybe a more serious approach is justified.

Not the answer you're looking for? Browse other questions tagged outdoor shed post storage or ask your own question.

0
deck railings: alternatives to 4x4 posts?
1
Do I need to replace these metal support posts?
0
Best way to support carport posts
0
Cement Recommendations for Fence Posts
2
Extending 4x4 Deck Posts
0
Fence posts through patio stones
2
Can I join two 4x4 fence posts?
1
What's the best way to deal with the floor of a shed with water infiltration?
1
Do I need a gravel pad beneath skids on my finished shed?