I'm trying to replace a 3-way dimmer set-up (currently a Lutron MACL-153M) with a smart dimmer. I have C by GE Smart Dimmers. After a lot of tinkering yesterday, I was unable to get it to work. I've made a bad MS Paint diagram of the two boxes the dimmers are currently in below. 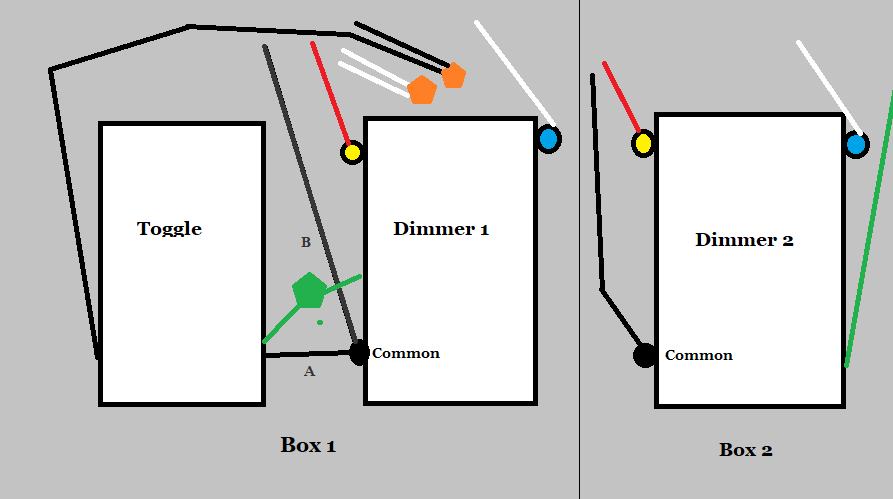 The first dimmer is in a box with a toggle. There are two black wires (labeled A and B) going into Dimmer 1's common screw/push port. One of these is coming from the Toggle, so I'm assuming that wire's the line from the power source. (I believe this wire also comes from a black wire bundle in the back). Wire B is separate when it comes from the top of the box. The rest of the set-up is straightforward, with red wire on the brass screw and a white wire on the blue screw, and a spiderwebbed bare ground wire running to both the toggle and the dimmer. The one quirk here is that in addition to the white wire coming from the box, there's a separate bundled and capped group of white wires at the back of the box, which I assume to be a group of neutrals, while the white wire from the blue screw is a traveler that hasn't been correctly taped with black. The current dimmer model doesn't require a neutral.

In the second dimmer, there are just four wires. A black wire to the common screw, a red wire to the brass screw, a white wire to the blue screw, and a bare ground wire. These dimmers control 8 recessed lights located physically between the two switch boxes.

Based on studying diagrams of 3-way circuiting, it looks like this is a pre-2011 switch circuit and there's no neutral in the second box. Is there any way to replace this grouping with either a) the C by GE smart dimmers (they require a neutral) or b) some other brand of smart dimmer, or am I out of luck? And if I can use the C be GE, how do I wire it (what would be the 'line' wire in the second dimmer, for example)?

I think you might be ok since you have a white wire going to the second switch acting like a traveler. The new GE smart switches do not need a traveller, so that white can be turned into a neutral.

I'm basing my knowledge of off this help site: https://support.cbyge.com/hc/en-us/articles/360020711551-3-Way-Multi-Switch-Installation-

In the box that has the other switch, you need to figure out which black wire is the "load" wire that goes up to the light. The bootlegged white traveller will get bundled with the rest of the whites and turn into a true neutral in the other box. 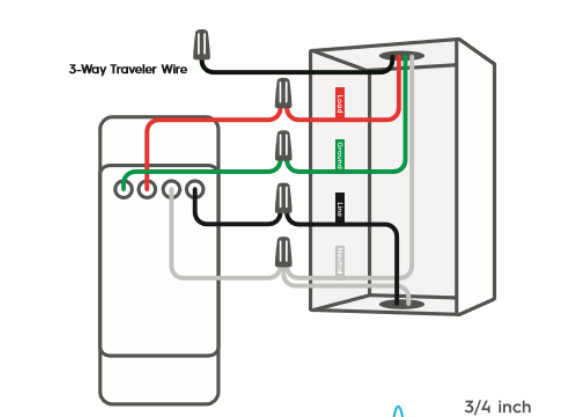 I think that "line" in this diagram is what you have labeled as "common" in yours. If there is a black wire shared with the other switch, you can assume that will be the "line" wire. That "line" also needs to be present in the second box (it should be). Line will have voltage on it at all times (it's not switched like the load and traveler wires). You will not have a capped traveller, because you are using it as a neutral. 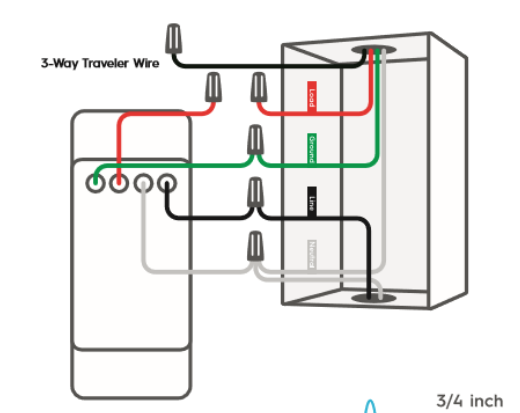 The switch only needs a neutral and line wire. Seems kind of odd at first glance - the switch isn't switching anything! Well, their 3-way setup is obviously using a wireless signal as the traveller. The first switch does all the work and this second switch is really just a wireless button.

I have Lutron Casseta dimmers in my home that do the same thing except the second switch is just a battery operated remote that installs in the switch plate. You can add more remotes as needed. The system does require a hub, but I enjoy the flexibility and easy of installation. Certainly pros and cons. I think your GE setup will work.

Not the answer you're looking for? Browse other questions tagged electrical home-automation smart-switch or ask your own question.